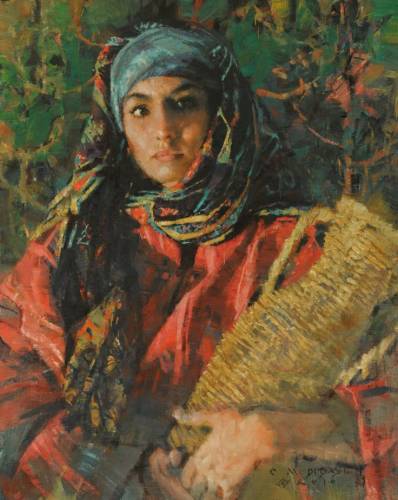 Do you ever get irritated when reading genealogies in the Bible? All that “so-and-so begat so-and-so…” Most of the time, we just skip over these lists of unpronounceable names to get to the good parts that really matter. Yet, genealogies hold deep meaning for us if we pause a moment and consider them closely. This is especially true for the genealogy in the first chapter of the Gospel of Matthew.

Matthew’s primary goal is to demonstrate that Jesus is a descendent of both Abraham and David. When breezing through the rest of the list, though, a fascinating trend emerges: there are women’s names.  Usually, genealogies focus solely on the male line, but not in this case. Even more puzzling is that three of the five women have somewhat shady pasts as recounted in the Old Testament. Why then do these women appear in a genealogy that supposedly defines the purity of Jesus’s messianic lineage?  What is special about each, and what does her story reveal to us today.

First is Tamar. Tamar has the dubious distinction of tricking her father-in-law, Judah, into sleeping with her. Second and third are Rahab and Ruth. You may remember that Rahab was the Canaanite prostitute who harbored Joshua’s spies and eventually helped bring about Jericho’s downfall (Joshua 2:1-24). The Book of Ruth is an inspirational story about a loyal young widow who finds love again with a wealthy relative, Boaz. Next up in Matthew’s genealogy is Solomon’s mother and David’s infamous wife, Bathsheba (2 Samuel 11:1–2 Samuel 12:24). The verse does not state her name overtly, but mentions she “had been the wife of Uriah” (Matt. 1:6).  The final female Matthew mentions in the genealogy is Mary, “of whom Jesus was born, who is called the Christ” (Matt. 1:14). So concludes quite a list of ladies who, at first glance, seem to have nothing in common except that they are women.  Yet, all five were pivotal characters who triumphed in the Biblical narrative despite living in a male-dominated world.

Tamar and Bathsheba were both in the unenviable position of being at the whim of the men in their lives.  After her husband dies, Tamar disguises herself as a temple prostitute and sleeps with Judah.  She knows the only way she can force her father-in-law to honor his familial duties is to bear him a child (Genesis 38:14-19).

Like Tamar, Bathsheba is a victim of her circumstances, too. Though some storytellers through the centuries have portrayed Bathsheba as a woman of questionable character, it is clear that she had little or no choice in her situation.  It is David who commands Bathsheba to come to him, and it is David who orders Bathsheba’s husband, Uriah, to the front lines to be killed (2 Sam. 11:1-27). No one refused a king—especially David—anything. Bathsheba’s first son with David dies, but her second son, Solomon, becomes one of the most famous kings in the Bible.

Rahab and Ruth were additionally disadvantaged because they were both foreigners. Rahab was a Canaanite, and Ruth was a Moabite.  The Israelites had strained relations with both of these ethnic groups due to years of warring and in-fighting in the region. Strict purification laws prevented Jews from having any sort of close personal relationship with foreigners, much less inter-marrying with them.  Despite this, both Ruth and Rahab long to become part of God’s people, the people of YHWH. In one of the most fervent verses in the Bible, Ruth refuses to leave the side of her grieving mother-in-law, Naomi:

But Ruth replied, “Don’t urge me to abandon you, to turn back from following after you. Wherever you go, I will go; and wherever you stay, I will stay. Your people will be my people, and your God will be my God.” (Ruth 1:16)

The death and loss Ruth and Naomi faced together formed an unbreakable bond, and by the end of the story, God transforms their numbing tragedy into hope—the hope of love with Boaz, and a baby.

Rahab, too, recognizes God’s power and casts her lot with the Israelite spies she agrees to protect:

Before the spies bedded down, Rahab went up to them on the roof.  She said to the men, “I know that the Lord has given you the land. Terror over you has overwhelmed us. The entire population of the land has melted down in fear because of you… Because of you, people can no longer work up their courage. This is because the Lord your God is God in heaven above and on earth below.” (Josh. 2:8-9; 11)

Rahab knows deep within her that the Lord will win Jericho. She bargains for her own life and those of her family members, and is guaranteed safe passage. Eventually, Rahab marries into the tribe of Judah, has a son named Boaz, and becomes Ruth’s new mother-in-law.

All five of the women listed in Matthew’s genealogy were strong women who, despite being at the mercy of the men in their lives, secured their status and the Davidic line.  Some feminists  decry the fact that, in ancient Jewish society, these five special women had no other value than the ability to bear children.  This may certainly be true, yet without them, God’s rescue plan for us would never have come to pass.  Jesus would never have existed.  Men may have thought they controlled the world, but ultimately, it was the “yes” of a woman—Mary—that allows us to call ourselves Christians today. Remember this during this Advent season.

Rebecca Lister is an associate professor of music at Lebanon Valley College in Annville, Pennsylvania. Her passion is music and worship in churches.  She is a student in the on-line program of University of Dubuque Theological Seminary and is an Inquirer in the Carlisle Presbytery.