A turtle’s gift of grace 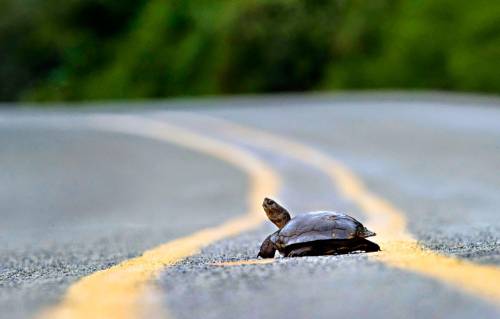 On June 1, 2018, I left the headquarters of the PC(USA) with about 20 other people, people who were committed building a fossil free PC(USA). We didn’t get into our cars and we didn’t call a Lyft. Instead, we walked. We walked about 15 miles that day. And the next day we walked some more. For two weeks, we walked every day, covering 212 miles on foot and ending in St. Louis in time for the 223rd General Assembly.

The PC(USA) Walk for a Fossil Free World focused on three things:

Every morning began with prayer and every evening ended with a teach-in and worship. In between, we walked 10 to 20  miles. We prayed and sang and talked and listened and looked while we walked along the highway and through towns. We listened and felt cars and trucks whiz past us and walked around decomposing roadkill. Sometimes we’d talk about the animals we’d seen on the road, our hearts breaking at the death we were passing. These animals were casualties of the cars, unseen and unfelt losses by most people as they went by. Some afternoons, we realized we needed to cover more ground in order to make it to the next stop of the day. Those afternoons, those of us with strength and energy took to running.

One late afternoon, I went with the runners. I run long distances — training for half and full marathons — so I’m a slow runner. This particular afternoon, I was especially slow. Frustrated, I wondered just how far behind I’d be at the end of the five miles we were running. I watched the next slowest person disappear around the bend. I was alone on the road. To be honest, my ego was bruised by how slow I was going. And then I saw something in the road.  A little bump. It was a turtle.

She was in the middle of the oncoming lane. The runners who were faster than I am wouldn’t have seen her. Just as I saw her, I stopped to watched as three cars drove over her, her body in between the wheels. I prayed that they would miss her.

And then — when the cars were gone — I walked into the middle of the road and picked her up. I carried her off the road and placed her gently in the grass. I whispered a prayer as I took off,  suddenly aware that our walk was about life.

abby mohaupt (name is correct as per the author) is the moderator of Fossil Free PC(USA), a PhD student at Drew University in Madison, New Jersey, and a minister member of San Francisco Presbytery. She’s is a partner, daughter, aunt and sister, as well as a long distance runner and artist.
Tags: fossil fuel, God, grace, run, turtle, walk