The sound of no hands clapping 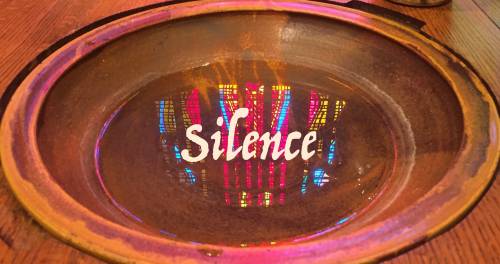 When the music ended, nobody clapped. I was the guest violin soloist for a performance with the high school concert band in the next town. It was their winter concert, to a full house.

We were playing music by John Williams, the theme from Schindler’s List. The 1993 movie retells a story from the Holocaust about a German industrialist who bought Jews out of the concentration camps to work in his factories, thereby saving their lives.

As I interpret the music, the violin begins with notes of lament—grief and great loss looking for expression. And finding a phrase that does manage to say something of what wants to be said, it goes more boldly and deeply into the remembering. By the end, the horrors of what happened haven’t changed, but the music has brought us into a place of humanity and hope.

Well, we made that journey, the band and the audience and I, and when the music ended, nobody clapped.

I’ve played a lot of concerts and recitals through the years and I have to tell you: it is customary at the end for the audience to applaud. Even so-so performances—even ones with glaring mistakes—are met with at least polite applause. The best might garner some bravos or even a standing O. But no applause at all?

My first thought: they hated it. But there was no booing, no incoming tomato, no hook from offstage. It was more like a suspension of breathing, each of us and all together. Somehow a vote was taken and the audience as a group decided that the usual and the customary were not sufficient for that moment and only silence would do.

I can report that, after three or four slow-motion heart beats, they did clap, enthusiastically. And that is when I learned that silence following a performance may be even better than applause.  On a rare occasion, when the music has really worked, not only in the playing but also in the hearing, when souls have been touched and hearts have been stirred and no one wants it to end, silence may offer a higher praise.

When I worked as a pastor, one of the ongoing disagreements in the area of worship was the one about clapping. Some thought there should be no clapping in church. It was not a performance; it was worship. We were offering it to God, not for human acclaim. Clapping cheapened what was to be holy.

But others longed for more spontaneity and enthusiasm in worship. Everywhere else in our world and even in other churches, people expressed appreciation through applause. To ban clapping in church smacked of stuffiness and repression. It confirmed our Presbyterian reputation as God’s frozen people.

Though I didn’t take a strong stand on the controversy, my heart was with the pro-clapping group. If you feel moved to clap, clap. If the anthem makes you want to burst into applause, burst. It will be OK.

The congregation settled into a something of a compromise: clap for upbeat anthems but not for more meditative ones. This worked fairly well, but I must confess, there were times when the clapping felt awkward, like the halting and hesitant applause after a below-par rendition, a response the choir dubbed the Mercy Clap.

Now worshiping from the pew, I am finding that sometimes I would rather savor the moment than put my hands together. Yes, we can show our appreciation to the musicians and to God; we can give thanks with applause. It’s OK. But along the way we may find ourselves in a place that seems to call for something more.

Ken Rummer, a retired Presbyterian pastor, writes about life and faith from the middle of Iowa by the High Trestle Trail. His previous posts can be found at http://presbyterian mission.org/today/author/krummer