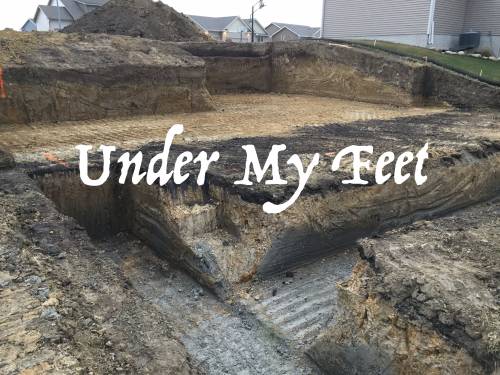 Soundings In Soil And Stone

Under the ice, that’s where we would have been 14,000 years ago, if we’d been here, on this land where our house now stands. During a period of widespread glacial advance that geologists call the Wisconsin, a giant tongue of ice crept into what is now Iowa from the northwest, bulldozing a pile of dirt and gravel as far south as present day Des Moines. The golden dome of the state capitol marks the spot.

When they dug the foundation for our house (pictured above), I noticed on the sides and bottom of the hole a yellow, ochre-colored clay, and in the deeper trench for the walk-out foundation, a blue-gray clay. That got me wondering and then doing some digging of my own, research-wise.

I learned that when the glacier melted, it left behind ground up rock and tumbled stones, 45 to 60 feet deep. The yellow clay is part of that, starting out as dirt and dust on top of the ice and later settling out in the melting. The gray clay was ground and mixed under the glacier, including bits of dinosaur-aged shale it dragged all the way from the Dakotas.

Under the gray clay, geologists have found bits of wood, remnants of a forest that stood around here before the most recent glacial advance. It’s those bits of wood, through the decay of their radioactive carbon, that give evidence for the timing of the arrival of the ice.

Below the bits of wood, there are layers of grindings left by older glaciations, like the one that reached all the way to Kansas 600,000 years ago. It’s odd to think that growing up in Kansas, I lived just a few miles from where the ice finally stopped, and here I am again, now in Iowa, living just a few miles from where the more recent ice, geologically speaking, ground to a halt.

There’s more down there, under the glacial tailings. Layers of limestone give evidence that this place was under water for long periods three and four hundred million years ago. Coal is down there, too, the compressed remains of ancient swamps.

Deeper still, the kinds of rock formed by lava and magma mark the place where North America started to split apart. That ancient crack in the continent runs right by here.  Of course, that was very long ago, a billion years or so, but had it followed the usual course of things and opened up to form a sea, I could be living on the coast now, perhaps fulfilling my pre-teen surfing dreams.

To listen to the rocks is to gain a certain perspective. Compared to the story in the soil and in the stone, one human lifetime is barely a blink. All of human history is but a brief postscript to the last volume on a very long shelf of books.

I find it humbling. Who are we in light of the vast stretches of earth-time past? The psalmist’s question to God comes to mind: “What are human beings that you are mindful of them, mortals that you care for them?” (Psalm 8:4 NRSV) “Yet…” The psalm takes a surprising turn. “You have made them a little lower than God.” (Psalm 8:5 NRSV) Among the wonders of creation, the psalmist points to one more, that God has granted humans an honored place in the midst of it all.

In the midst is where I find myself. Beneath my feet spreads the dark, productive soil built by ants and earthworms and prairie grasses. Below lies the clay, yellow and gray, that the glaciers ground and left behind. Farther down, the shells of ocean creatures turned to stone and the black pressings of ancient swamps. And under it all, the fiery rock that healed a continent. Thousands of years, hundreds of thousands, millions and millions—it’s a very old story I’m hearing, but it’s nice to know where I stand.

And it’s encouraging, at my age, to know that, disparaging comments aside, I am not older than dirt.

Ken Rummer, a retired PCUSA pastor, writes about life and faith from the middle of Iowa by the High Trestle Trail.