I am an immigrant and a former refugee. I came from Cuba to the U.S. via Spain in the late ’60s. I belong to that group of people from the “Global South’’ who began to migrate to this country by the millions after the liberalization of the immigration laws in 1965.

Like previous immigrants, I was thrust into the so-called “melting pot.’’ The term is used to describe the process of “Americanization,’’ a means by which new immigrants were assimilated into the “American culture.’’

In other words, Eastern and Southern European immigrants that came during the 19th and early 20th centuries were expected to adopt, accept and abide by the rules imposed in society by an English-speaking, white majority with roots in Western and Northern Europe. The United States needed the immigrants to provide the workforce to become an industrial giant, but those immigrants had to conform to the ideal of those who owned the factories and mills.

However, during the late part of the 20th century, black America, the sons and daughters of those who came forcibly from Africa as slaves, said “Enough!’’ They also had been forced to assimilate; to conform to the patterns and the behavior of white society, or be segregated and oppressed.

The new immigrants, those who come from all these non-white, non-English speaking countries, also began to assert their cultures and languages. Following the example of African-Americans, and aided by “Transnationalism’’ (ease of transportation and communication with their native countries), new immigrants are proud and happy to maintain their ethnic and cultural heritage. We learn English and we abide by the laws and work hard and try to enjoy democracy and we are grateful that we are here, but we do not abandon our languages, our cultures, our music. Furthermore, we do not abandon the way we express our various faiths for the most part.

“From this point of view, the U.S. can be described as a salad bowl where individual ethnic groups blend together; yet maintain their cultural uniqueness. They may work together during the day at similar jobs and in identical companies but at night they may return to their ethnic communities where the flavor of their individual culture dominates their way of life. Each ethnic group has its own special interests, language, food, customs and traditions to protect and defend. This idea of the salad bowl is referred to by sociologists and cultural pluralism. It simply means that U.S. society is a collection of many cultures living side by side within one country.’’[ii]

Moreover, demographers predict that by the middle of this century of even before, there will not be a racial ethnic majority in this country due mostly of immigration from the Global South. The “salad bowl’’ will certainly be enhanced by these “emerging majorities.’’

Many of these new immigrants desire to affiliate with our church since some are indeed Presbyterians, the product of our missionary activities in their countries. They are ready to share with the American church their unique gifts of culture, music and language, as well as their faith and commitment to the gospel of Jesus Christ.

Contrasting with the way things are going around us in society, our church presently is mostly homogeneous, white Anglo and English speaking. If the Presbyterian Church (USA) is going to fulfill her calling to be a reflection of the kin-dom of God and God’s creation in all of its colorful glory, then the new immigrants and their descendants present a wonderful challenge as well as an opportunity for ministry.

The above realities and dynamics may lead us to prayerfully consider the following: In matters of Ecclesiology and polity; worship traditions and decision-making processes, since the PC (USA), as well as other Reformed traditions, follows a northern European, Western, logical and rationalistic ecclesiology developed by lawyers (Calvin, Knox), thus contrasting with immigrants from the Global South with very different world views and methodologies, will the newcomers have to comply and adopt methodologies – event theologies – which may be foreign to them (pun totally intended)?

For example, while individualism still reigns in the United States, even within the PC (USA), most of the new immigrants tend to be more community-oriented.

In a society where individualism prevails such as the U.S., people regard themselves primarily as individuals, and it is more important to focus on individuals so that they can contribute to the community as and if they wish.  In a communitarian society […], people’s opinions are just the opposite: People think of themselves as part of a group, and consider the community first since that is shared by many individuals.[iii]

For them, social rights have precedence over individual rights. How will local church bodies and congregations deal with this new type of “connectionalism’’?

To be fully inclusive, will the agencies and mid councils at every level be willing to conduct business in languages other than English? Recently General Assembly commissions and committees, such as the Way Forward Commission, have challenged our denomination to be more intentional about hiring multilingual and culturally proficient staff at all levels that will develop resources in the native tongues of new the new immigrants and publish important statements and documents in languages other than English. That is indeed a step in the right direction. It all depends how the PC (USA) agencies prioritize in their budgets these much-needed initiatives.

Regarding our decision-making processes, since the Christian world outside the United States does not recognize Robert’s Rules and following their more communitarian worldview utilize mostly varied versions of the consensus process, how will Global South discernment methodologies influence the way we make decisions in our present structure? [iv]

Regarding theological education, some of our seminaries already have specialized study programs on Hispanic, African-American, Korean and other ethnicities. However, these programs seem to attract only students from those communities for the most part. These courses should move from being either electives of “specialized’’ to “required’’ categories in the core curriculum so that white students would learn how to minister in a multicultural world. Also, they should be taught by theologians from the Global South and other People of Color such as African Americans and Native Americans.

To summarize, will the newcomers and other people of color have to suffer through what I call forced ecclesiastical assimilation to be part of our church just like previous immigrants – and people of color in general – were forced to do in society?

In my humble view, a truly inter-cultural church should reflect both the quantitative and qualitative dimensions of the cultures represented in the community of faith in the worship service, as well as in the leadership and decision-making processes.

How can the Presbyterian Church U.S.A. address those issues in a just, fair; Christ-like manner, not just paternalistically ‘’welcoming’’ the new immigrants and other people of color, but by becoming the “church together’’ with them?

We have a gift from God of people who, while different from us, will energize our old church with new blood, passion, music, ways of reaching out to the community and a love for God in Jesus Christ with the potential to transform us into the church God expects us to be.

[iv] Consensus decision-making is a group decision-making process in which group members develop, and agree to support a decision in the best interest of the whole. Consensus may be defined professionally as an acceptable resolution, one that can be supported, even if not the “favourite” of each individual. Consensus is defined by Merriam-Webster as, first, general agreement, and second, group solidarity of belief or sentiment. It has its origin in the Latin word cōnsēnsus (agreement), which is from cōnsentiō meaning literally feel together. It is used to describe both the decision and the process of reaching a decision. Consensus decision-making is thus concerned with the process of deliberating and finalizing a decision, and the social, economic, legal, environmental and political effects of applying this process. https://en.wikipedia.org/wiki/Consensus_decision-making 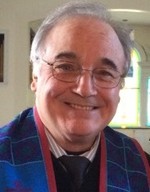 Tony Aja is pastor of Westminster Presbyterian Church in Santa Fe, New Mexico. He is the moderator for the National Hispanic/Latino Presbyterian Caucus and an adjunct professor at McCormick Theological Seminary.