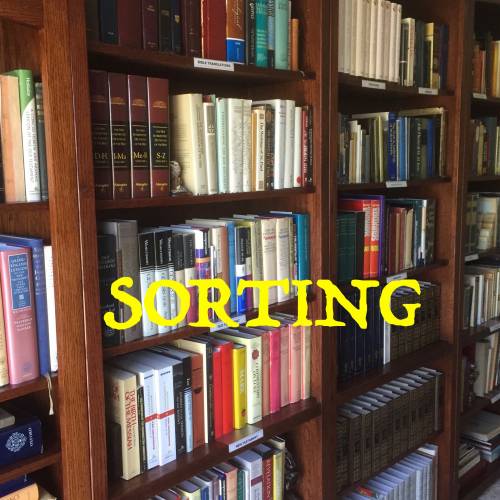 Last to be unpacked were the books. They had lived in four tall bookcases and one small one in the church office, and in three tall bookcases in the home library, but only three of those bookcases came with us to the new house.

Serious domestic negotiations gained agreement to purchase two additional bookcases, on the condition that the combined family and professional library be reduced sufficiently to fit into the total of five sets of shelves.

Seven and a half bookcases worth of books into five—I thought it surely would be possible. But then, sorting and choosing and saying goodbye to . . . one out of every three books! What was I thinking? If only I had a Harry Potter sorting hat for books.

Should I hold on to the ones that were formative for me? Or keep the ones that I had used the most? Or should I save the ones I could most easily imagine turning to in the future?

I ended up using a combination of all three criteria, applied in a manner not entirely clear, even to me. And the choices got even tougher near the end. (Two and a half shelves of books still on the table and only half a shelf of space remaining. Aaak!)

I can now report that, with the steadfast encouragement and assistance of my wife, and despite recurring sighs of self-pity on my part, I did finally reach the finish line, though more exhausted than triumphant. All the books judged to be keepers had a home. In five. Very full. Bookcases.

The Prius, loaded with the books that hadn’t made the cut, transported them to the discount book store. The clerk began to go through the boxes book by book while encouraging me to browse the store. (Wasn’t that how I got into this mess in the first place?)

But I did have a particular book in mind, the second volume of The Riverside Shakespeare. I had acquired Volume 1 some years ago, and I reasoned that if I could find Volume 2, then I could let go of my Complete Works and gain an inch or two of shelf space by means of the exchange.

After cruising the entire store to no avail, I resorted to extreme measures. I asked a clerk for assistance. She turned around and pointed right to it, Volume 2, in excellent condition, only $15. Perhaps God was in this crazy project.

Still waiting, I turned to the children’s section. In my younger years I had enjoyed the Winnie-the-Pooh books. Now, with grandchildren needing bedtime stories, I was wishing I could pull out A. A. Milne and revisit Eeyore’s birthday party, and Pooh’s encounter with suspicious bees, and the poem about a king wanting some butter for his bread.

The store didn’t have the four little books I remembered, but it did have all four combined in one large volume, complete with the original illustrations. The used and discounted price was $20. I added it to the Shakespeare.

About that time I heard my name being paged over the store PA. My offer was ready.

As a previous seller to this discount book store, my expectations were not high. In fact, I did not think it odd that a whole carful of pastor books would garner the meager bid that it did.  But I was surprised when the offer came to the exact price of the two books I had selected, $35.  Another sign?

I headed to the checkout, cheered by the thought that the books, formerly mine, might find new readers, and buoyed by the sense that somehow God was at work, even here. I had survived The Big Sort.

Will I miss the books I used to have? I suspect I will, at least some of them. But in the spirit of the biblical hero Gideon (Judges 7), who was into signs, too, I am going forward with reduced forces (only 653 books) trusting that in the plan of God, and perhaps with the addition of a few jars and trumpets, they will be enough.

Ken Rummer, recently retired PCUSA pastor, writes about life and faith from the middle of Iowa by the High Trestle Trail.