Wednesday of the Fourth Sunday in Lent

I love my sisters. But sometimes I don’t know what to do with them. Take today. As Jesus and his disciples passed through Bethany, we welcomed them into our home. As they were relaxing, we struck up a conversation. It’s one thing to hear Jesus teach to crowds; it’s another thing entirely to get him one-on-one. Well, Mary decided she wanted to listen to Jesus too, so she plopped herself down at his feet, right in the middle of all of us men! And then, if that wasn’t enough, Martha barged in, interrupting Jesus as he was teaching, and tried to make him send Mary back to the kitchen. I was beside myself, thinking: This is no way to treat our guest!

Jesus, however, was much more gracious than I’d have been. He was gentle with Martha and actually praised Mary. He said that what she chose wouldn’t be taken away from her — definitely words to ponder.

Jesus, help us understand and align ourselves with your priorities.

The pelican predates the cross as a symbol of Christianity. A pelican is a lonely figure like Jesus on the cross. According to legend it will feed its young its own flesh in order to sustain them, so the pelican became symbolic of the life-giving act of Jesus’ crucifixion. 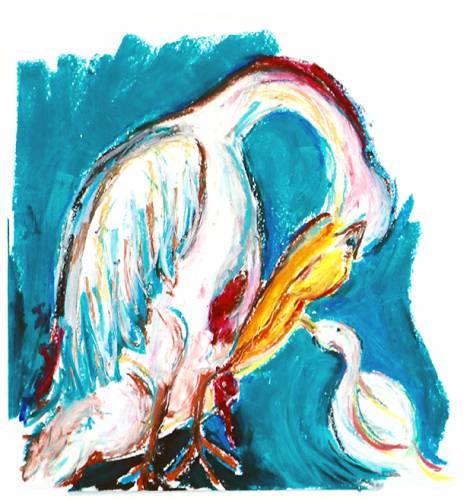