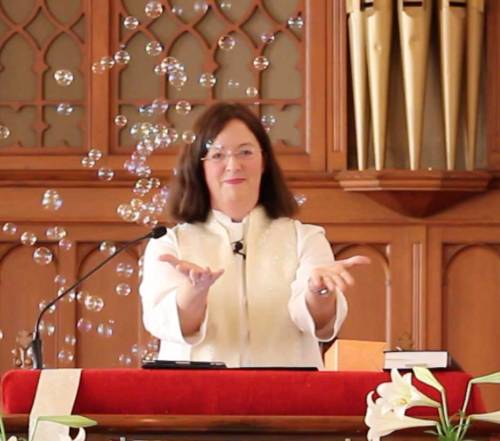 As our denomination works its way through the new language for the Directory for Worship, I’m breathing a sigh of relief. As a pastor, I seek to follow the example of a grace-first God. This means I say yes to a lot of things in my improvisational style of leadership. I meet people where they are and commit to being with them in the moments that follow, no matter how the story unfolds.

It’s like improvisational theater or improv; we never know what is going to come at us next. In improv the actors commit to going with the flow. There’s no script. Everything that gets said and done is created in the moment. Each person in the group has a commitment to the other. The prevailing understand is that each person responds with a “Yes and….”

That doesn’t mean improv actors literally say “Yes, and…” each time. That would get tiresome to watch and listen to! But it does mean that they affirm what the person before them has done and take the story a step further. It’s an invitation and a commitment to keep the story going, even if you aren’t crazy about its direction. Improv can be hilarious or deadly. It can reveal truths you didn’t know existed. It can make you feel smart and witty or it can make you feel like an idiot. Either way, you commit to stay in it, even if it’s costing you.

This is what God has done for us throughout human history. God has taken what we’ve given and responded with a “Yes and….” Even when the storyline is not what God might have chosen. The yes isn’t an affirmation like Great Job! It is simply an acknowledgement of where we are and God’s promise to be in it with us, to be faithful even when we are not.

The good news is that our story starts and ends with God. God may indeed have the whole script committed to memory already. But we don’t. From our perspective, God says yes and keeps the story going.

Adam and Eve disobey while in Eden. Yes and … God sends them out of the garden with clothes to hide their newly discovered nakedness.

People are in need of God’s blessing. Yes and … God calls Abram to begin a new nation to make that blessing happen.

Israel loses its way. Yes and …  God sends prophets to call them back.

While we are yet sinners, God says yes and … keeps the story going.

General Assembly 222 approved changes to the Directory for Worship that allow us as churches to say “Yes and…” more often, to improvise in ministry.

The proposed changes, which will have to be ratified by presbyteries, remove some of the barriers to encountering Christ in the sacraments. They allow people who have not been baptized to participate in the Lord’s Supper and allow for baptisms when the parents are not members of the church. It is my prayer that these changes will allow us to reflect the grace of a God who says yes and commits to staying in the story with us.

To the person who has not been baptized and comes to the table for communion, we say yes and pray that Christ meets them right then and there in the mystery of the bread and cup. And then we take the story further and invite them to be baptized.

To the person who wants a baby baptized even though they are not a member of the church, we say yes and invite them to remember their own baptism and then take the story further by inviting them to worship more regularly.

To the teenager who longs to be baptized even though her parents don’t come to church, we say yes and take the story further by nurturing her in Christ.

At the church I serve, we’ve already been saying yes to many of these things because we want people to know that when they made a move toward participating in God’s story, someone was there to say yes and help a new chapter of their life begin to unfold.

We want them to know that when life gets hard and they start improvising, Jesus is willing to step in and play a part.

So at the church I serve we say yes to baptisms and are free with our communion bread. We say yes to the out-of-town couples who request our building for their wedding since we are near a popular barn reception hall. But we don’t just say yes. We say yes and… as we encourage them to love as Jesus loves, even though we will never see them again.

We say yes  and… as often as we can. We say yes and sometime we trust that God we make the next move. We say yes because we know that at some point in our own lives, we’ve all needed someone to help us through our own story, someone to say:

Yes, I see where you are and I love you anyway.
Yes, I know what you’ve done and I forgive you.
Yes, I can tell your are hurting and I will walk with you.

We say yes because we remember that God saw what was happening in human history and stepped into our story in Christ.

And changed the world forever.

Read more about the changes to the Directory of Worship on page 2 of the General Assembly News.

Sue Washburn is the interim editor of Presbyterians Today and the pastor of Reunion Presbyterian Church in Mt. Pleasant, PA.