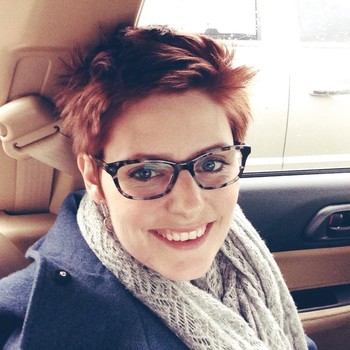 Crying my way through my first year of ministry
It sounds obvious, but few talk about it without the noble veneer of self-sacrifice: ministry is hard.

On August 1st, I will celebrate my one-year anniversary of working in ministry. When people ask how my first year went, I tell them, “This is the year I learned to cry in public.” Depending on how honest I’m feeling, sometimes I laugh and turn it into a joke before things get too awkward. Other times I let it stand, because, frankly, it’s the truth.

I have always been an emotional person, but—with few exceptions—I’ve been an adamantly private crier. This year, I have cried a lot. Often in front of people. Often in awkward places.

I’ve cried in our sanctuary during worship, and in my office, and in coworkers’ offices. I’ve cried on public transit on the way to work, and outside of a hipster bowling alley late at night, and in my roommate’s bed while we binge-watched Veronica Mars and drank boxed wine.

Some of my tears have been happy ones. I have teared up over powerful, root-shaking sermons from colleagues, and intimate, vulnerable conversations with church members. I have gotten misty-eyed at all of the five weddings I’ve done so far and I’m a little amazed I got through my first baptisms at all. In the past year, I reckon I’ve served Communion roughly 35 Sundays, and I’ve gotten choked up every single time. When I talked about my own queerness from the pulpit just days after the 86th presbytery made our denominational embrace of marriage equality official, my voice shook with emotion. These have been holy, sacred moments well worth their salt.

However, the truth is that most of my crying this year—especially the embarrassing, splotchy-face kind—has been about hard stuff. Because here’s the thing: ministry is hard. I think people may have vaguely mentioned the challenges of church work when I was in seminary, but I didn’t really hear it. It was overshadowed by talk of exhausting oneself for a holy cause. “Sure, there will be challenges,” I thought with a smile last July. “But God is calling me to this work so obviously I can handle it.”

‘The real miracle isn’t that we show up to work everyday. It’s that God shows up every single day, sometimes lifting us up and sometimes dragging us along.’

This mentality is why it took me four months in my new ministry before I finally admitted to anyone that I was really struggling. The first few responses were almost identical. Every one of my confidants said, “Oh yes, I’ve been there. The first year of ministry is really tough.” Amazed and comforted, I began to talk to more and more ministers about the early years of their call. I found fellow strugglers nearly everywhere I turned.

I was flooded with relief. I had honestly never heard a minister admit that they had struggled the first year. I was terrified that I was alone and that my struggles meant that I wasn’t up to the task. I was afraid that if I admitted how hard everything felt, all of the people who had affirmed my call would think that I was a fraud. This fear was compounded by the reality of being a queer woman; others had worked for decades so people like me could answer their call from God. Who was I to respond to their hard work and sacrifice by breaking down in my office and wondering what the heck I had gotten myself into?

I did wonder this, though—more than once—as I learned how to do my job mostly by fumbling around and messing up over and over. I wondered what I’d gotten myself into as I tried to find community in a new city while desperately missing seminary and spending almost all of my time working. I wondered it as I muddled my way through painful upheavals in my personal life, and when I felt overwhelmed by loneliness, exhaustion, and helplessness. I wondered it as I tried to preach and pastor with integrity as a broken person in a deeply broken world.

On the very hardest days, I pouted in my office and thought to myself that it was a miracle I showed up to work at all. And I cried. A lot. Occasionally I threw pillows. It was not an easy year and that is not an easy thing for me to admit. Even now, as I type this, I am anxiously imagining all the rolled eyes and frustrated groans that will be leveled in the direction of this blog post. “What a whiner,” I can imagine readers saying. “Who does she think she is?”

Who I think I am is a pastor, and after this year, I know that’s true only by the grace of God. I write about these difficulties because I have come to believe they are incredibly common. If there’s any new minister out there silently fearing that they are alone and inadequate, I hope that minister reads these words and knows that I too have been there. Many, many of us have. Ministry is good, important work, but it is also very hard. We should be more honest about it, so that none of us has to feel alone.

Soon I will be in my second year of ministry. I don’t expect it to be easy. At my ordination service, my former youth pastor urged me, during my charge, to “live into things.” She’s seen me through every foolhardy, hare-brained scheme I’ve come up with from adolescence onward. She knows how bad I am at being patient. I think I am just beginning to hear the wisdom in her words. I carry that hard-learned wisdom into my second year, along with the comfort of knowing that I’m not alone as I live into this calling. There are fellow strugglers on the journey, and there is—of course—the God we all love. The real miracle isn’t that we show up to work everyday. It’s that God shows up every single day, sometimes lifting us up and sometimes dragging us along.

Layton E. Williams is a teaching elder currently serving as the pastoral resident at Fourth Presbyterian Church in Chicago. Her ministry focuses on young adults, adult education, and a jazz worship service.