I’ve been working with a group of high school students for the last three weeks. We are fixing up an urban park that has fallen into disrepair. We’ve picked up trash, we’ve weeded, we’ve hacked down bushes, pulled up dead trees . . . it’s been a lot of work. Two weekends now, we’ve left the park as clean as we could make it, and each time, the following Monday, we’ve had to begin our day by picking up trash. It is disheartening to see your work disrespected.

This past Monday, some individual or group pulled down the already-damaged fence. The park looked awful when we arrived. My group was clearly deflated. Getting the team motivated has been a challenge on the best of days. Asking them to do a seemingly hopeless task on a Monday morning has felt like a battle that has no winners. I jumped into work, hoping that my enthusiasm might be contagious. It was . . . for about an hour. The desire to work was gone after lunch. This is not atypical. It’s just that usually the desire creeps back after about 30 minutes. It did not creep back.

A thankless task. An apathetic crew. A body that was feeling much older than its 35 years. So what was I to do? I did the only thing I could think to do—I planted flowers.

I’ve been gardening now for a few years. With the exception of an aloe plant that was given as a gift when my son was born, I’ve been pretty resolute about only growing things that result in something edible. I’m pretty selfish that way; maybe I’m also too focused on “results.” That, however, changed somewhat last year. During the hardest year of my life, I had a succulent, a fat cactus-like plant, that grew on my nightstand and kept me company. It’s amazing how a living thing, any living thing, can share just enough of its energy with you to remind you that life itself is a virtue.

I don’t know much about flowers. I didn’t know if I was buying the right kind for our climate. I didn’t know if they needed a lot of water or full sunlight. I didn’t bother to find out what kind of flowers they were until I got them back to the park (Coleus and Impatiens). They were pretty, and they looked hardy enough to stand up to the rowdy neighborhood kids that hover around us as we work. That was my very limited criteria. I didn’t have time to research the perfect species for the region or time of year. I just needed to plant something.

‘At the end of the day, I want to be the kind of person who would rather make a small, temporary gesture of goodness and beauty rather than add to the ugliness or do nothing at all.’

My friend Hugh describes himself as being in “relentless pursuit of beauty as a prophylactic against the ugliness” that he encounters in his work. The ugliness in this work is often the wrapper from a prophylactic. Or a discarded liquor bottle. Or a syringe. Sometimes it is a parent cursing at their child to get in the house. Sometimes it is the realization that children have been playing around us unsupervised for hours with no sight of an adult. I needed a break from the ugly.

The team was skeptical. 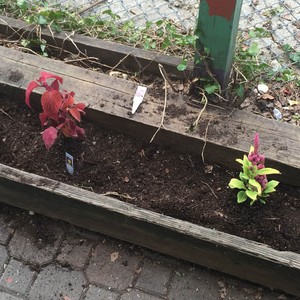 The flowers have lasted the week. I’m hopeful. Planting those flowers felt like an act of insurgency.

Planting flowers goes against a culture of death and violence. It pushes back against the corrosive effects of much of everyday life. It asks us to be patient in a world of constant hurry. It reminds us of impermanence. The fact that they might get plucked up or crushed or that we’ll have to do this all over again next year doesn’t eliminate the value of planting flowers now. At the end of the day, I want to be the kind of person who would rather make a small, temporary gesture of goodness and beauty rather than add to the ugliness or do nothing at all. It’s always possible that a few might follow me in this small gesture and multiply its effect.

Despite their skepticism and reluctance, the students went along with me. They felt good about having their hands in the dirt. They commented that the park looked better even if just a little bit. They’re now eager to plant more things. Maybe we’ll do herbs or a little garden. We’ve become accidental conspirators with God in continuing acts of creation.

Because the kingdom of God is like yeast or a mustard seed or some other small thing that has rippling effects, perhaps our small actions will surprise us with exponential goodness spreading throughout the city of Baltimore. Even if they don’t, they added some beauty to an ugly day. Maybe that’s enough.

Derrick L. Weston is a teaching elder in the Presbyterian Church (U.S.A.), a community builder for the 29th Street Community Center, and cohost of the podcast God Complex Radio.