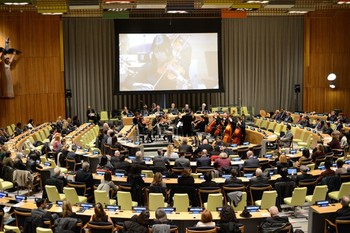 Dag Hammarskjöld used to invite people over to his house to listen to records of Johann Sebastian Bach. Considering all that Mr. Hammarskjöld had to do as the UN’s second General Secretary, this seems really odd. But today’s event began with the UNSRC orchestra playing Johann Sebastian Bach’s  “Air”. As the group played I was reminded of the power of music to convey the human ideals of harmony and beauty.

In the process of remembering, “we have learned that symbols matter.” said David Tolbert, President of the International Center for Transitional Justice. “Use of memorials about victims and their dignity are an ongoing form of remorse and apology.” Tolbert remarked. Today marks the very first day of commemoration for victims as well as its the prevention in the future. Tolbert continued, “We have to end the denial and legal niceties, and tell the truth about what happened”

Pablo de Greiff, Special Rapporteur on the promotion of truth, justice, reparation and guarantees of non-recurrence, gave his report. “The situation on the ground today shows a significant gap between intentions to ‘never again’ have genocide and what is often tolerated in our global community. Xenophobic rhetoric and hate speech as well as the many human rights violations show that “we have still much work to do in terms of preventative measures and utilizing available resources” Mr. de Greiff said. Greiff gave an example: “Recently, more than 60 countries have recently adopted legislation that severely constrains civil society organizations to do their role. We need to find a way to strengthen civil society.”

Several presenters, including the representative from Armenia and UN special advisors championed the efforts of civil society actors as well as those who have had the courage to tell the story right. “We have to tell the stories right, without denial and head on” said David Tolbert.  Education is a critical tool to reduce historical revisionism. Tolbert added, “Too often our textbooks are full of lies and denial of the truth of what really happened.”  Exposing the facts about genocide erodes the culture of denial. Telling the truth about Genocide means that nations must not deny the label or revise its history books. Tolbert pointed to truth Commissions like the one in Guatemala explored the crimes committed by state actors against the indigenous Mayan people in the middle of the 20th century.

Professor Elisa Von Joeden-Forgey concluded her statements saying:  “We should remember the victims as valuable members of our communities… as those who are tied to ourselves through the dense tapestry of human history.”

The remembrance was concluded by the UNSRC orchestra playing Beethoven’s  “Eine kleine Nachtmusik” (a little night music). During this season of peace, let us continue to pray, wait, and be vigilant, seeking truth and justice for all.