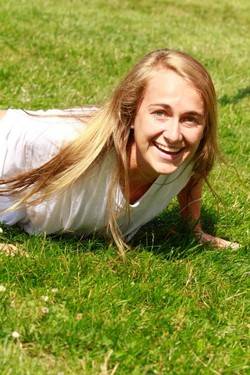 Our ministry had the opportunity to host a group of Young Adult Volunteers as part of their orientation process. Austen Zoutewelle, who will be serving in Austin, wrote a reflection on her experience:

Today the group broke up into four groups, all going to see very different communities in the area. I was assigned to go to the Presbyterian Ministry at the United Nations in New York City. I was a bit familiar with the UN from school and seeing the UN in Vienna, Austria when I studied abroad. I was clueless as to how the PCUSA was involved.

Once we arrived, we were introduced to Mark Koenig, who directs the Presbyterian Church’s Ministry at the UN. His colleague, Ryan Smith, explained the United Nations with an interesting metaphor. The UN has 193 member states. So imagine you have 193 hungry people. And all of those people have to decide where they want to go to dinner and a certain percentage must come to an agreement before they can eat. Well the PCUSA and other NGOs don’t get to vote in this decision, but they get to suggest the restaurant that the policy of the PCUSA General Assembly has recommended to the people who do get the vote. Basically, these representatives of the church have conferences with UN reps and explain their beliefs and introduce Presbyterians to these people, as well.