I had the unique pleasure yesterday of being given the opportunity to attend a panel on Climate Change hosted by the Unitarian Universalist United Nations Office. The panel was entitled “Small Island Nations- A New Endangered Species”, and it was fascinating. The panel was comprised of three speakers: Mr. 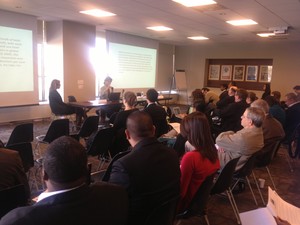 William F. Hewitt, M.S., who teaches climate change, sustainability, and energy and the environment at the Center for Global Affairs at NYU, Mr. Hassan Hussain Shihab who is currently the First Secretary at the Permanent Mission of the Republic of Maldives to the United Nations, and H.E Mr. Aunese Makoi Simati, Permanent Representative of Tuvalu to the United Nations and Tuvalu’s Ambassador to the United States.

Mr. Hewitt kicked off the panel by presenting a general overview of the climate change problem. He outlined which greenhouse gas emissions we have to be concerned about (CO2, Methane, Nitrous Oxide, Black Carbon) and showed several graphs detailing the exponential increase in global warming in the last hundred years. The part of his presentation that I found most interesting was the section where he gave a brief overview of Black Carbon, a greenhouse gas of which I was previously unaware. Black Carbon is soot, by and large produced by burning coal. However, lawmakers do not seem to have realized the danger that Black Carbon represents; it has gone unregulated even though it is considered a major factor in the melting of Arctic sea ice. Mr. Hewitt finished his part of the presentation by discussing way climate change affects small island nations the most deeply: rising sea levels. The final point that he imparted was the importance of adaptation and preparation. He stressed the need to prepare in advance so we can halt the increase in global temperatures before it becomes irreversible. 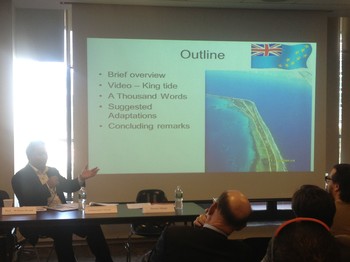 H.E Mr. Simati of Tuvalu was the next person to present. He told a powerful story of a nation of sinking islands where crops have been ruined by salination, floods have washed homes away, and there is danger on every tide. Tuvalu is in trouble. A community of eleven thousand people living on a group of eight islands in the South Pacific, Tuvalu sits on the frontline of climate change. Before the next fifty years are up, current predictions show that Tuvalu will have disappeared under the sea. H.E Mr. Simati spoke not only of the problems that Tuvalu faces now but also of the uncertain future facing its children. To me the most powerful image was not one of the destruction of the islands but an image of his young children playing in the sand on the beach. This is what we are trying to preserve.

H.E Mr. Simati noted several strategies to help Tuvalu combat climate change. However, many of them were very cost prohibitive. The strategy that excited H.E Mr. Simati the most was the idea of having a conference of small island nations where resources could be pooled and ideas could be share between those with the greatest stake in the issue. H.E Mr. Simati came across as slightly disillusioned with the United Nations since he has heard a lot of rhetoric but seen very little action. He urged NGOs to advocate for the prevention of climate change within the UN but also stated that he believes a more localized response will have a greater possibility for success in the immediate future.

After the presentation of the three panelists there was a short period of question and answers. The question that I found most interesting was about the situation of climate refugees. Apparently, as international law stands now there is no such thing as a climate refugee. There isn’t even a definition or a set of guidelines for what exactly such a classification would entail. This of course begs the questions, “When Tuvalu sinks, where is everyone going to go? How will the nations of the world view the people and respond?” So far there are no real satisfactory answers to these and related questions. This is an issue that becomes more poignant everyday. After all, if Tuvalu sinks who is next? The Maldives? New York City? Mumbai? This is an issue that demands international attention as we live in and care for God’s creation.

Teo Ufford-Chase is doing a three-week internship with the Presbyterian Ministry at the United Nations as part of his graduation requirements from Green Meadow Waldorf School.

The photos show the event and are courtesy of the Unitarian Universalist United Nations Office.