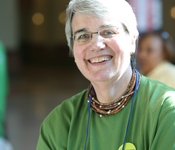 As the PC(USA), we still inhabit a top-down, corporate structure that worked well 50 and 60 years ago, when we were flush with members and with resources. We are no longer flush with members or with resources.  That does not mean, by the way, that I believe us to be deathly ill. I believe that health of any Christian community of faith is measured not by the number of its members, or by how deep its financial pockets are, but by whether it is proclaiming the Gospel authentically.

As a church, we are much more diverse and much more inclusive that we were 50 years ago. Although we have a long way to go, we have made inordinate progress in making this church a more open, inclusive, and diverse community of faith.  As a church, through the efforts of many in this room, we continue to preach truth to power, we continue to recognize that we are called to “do justice, love kindness, and walk humbly with our God.”   We continue to proclaim the Gospel message even when – especially when – the culture resists the demands of that message. We continue to do that because that is what the Gospel compels us to do.

So, no, I don’t believe we are deathly ill. We are proclaiming the Gospel to a world that sorely needs that message.  But that doesn’t mean that we don’t need to think radically about what it means to be a denomination in the 21st century. How, as the PC(USA), do we organize ourselves to make sure that we are proclaiming the Gospel not just authentically, but effectively, to a 21st century world?

Last week I read an article in the Washington Post about the completion of a decades-long project to renovate the Pentagon, remaking it from the jerry-built structure that sprang up during World War II and after into a building complex that could house the technology and tools needed to defend this country in the 21st century. The renovation took place, of course, while everyone continued to work in the Pentagon.

One of the leaders of the project compared it to taking apart a black and white television set and completely rebuilding it to be a color set, all the while making sure that the TV continued to show programs. That’s essentially the task that faces us now as the PC(USA): we have a black and white television set – meaning the organization and structure that we’ve had since the 1950s – and we need to rebuild it into a color set. If we don’t undertake the rebuilding, if we try to make do with a 1950s black and white set, we won’t be able to do mission and ministry effectively into the 21st century.

Right now, we as a denomination are much like the paralyzed man in the Gospel story – the paralyzed man who wants to see Jesus, who  wants to hear Jesus preach, but because of his paralysis can’t get through the crowd that is surrounding the house where Jesus is.  We want to not just see Jesus, we want to help other people see Jesus. But we are paralyzed by a structure that no longer fits with the way we do ministry.  The good news is that we as a denomination are acknowledging this paralysis. We are recognizing that we need to do something similar to what happened in the Gospel story, where a group of folks raised the paralyzed man up onto the roof of the house, cut a hole in the roof, and lowered him down into the room where Jesus was.

The good news is that we as a denomination are trying to figure out exactly what particular holes have to be cut in what particular roofs in order to cure us of our structural paralysis. Some of this discussion is coming from General Assembly-level committees, including the Middle Governing Body Commission and the Committee on the Nature of the Church for the 21st Century. Some of it is coming from unofficial discussions and dialogue, such as the Next Conference and the upcoming Fellowship conference. All of this discussion is useful and helpful.  It’s my hope and prayer that out of all these conversations, dialogues, and work will come innovative ideas for how to structure ourselves so that we can most effectively use the resources that we DO have.

And here’s the kicker: you must continue to do this work even as the rebuilding of the television set from black and white to color goes on all around you.  And that may be the most difficult task of all. Any renovation, any rebuilding, can lead to frustration. I imagine that every person in this room has experienced frustration over the effects of budget cuts, staffing cuts, strained resources. I also imagine that every person in this room has been frustrated over trying to make our voice heard in a culture that doesn’t respond to our voice the way it did 50 years ago.

It’s my HOPE that our rebuilding of the PC(USA) television set will lead us to more effective and innovative ways of using the resources we have.  But it’s my PRAYER that what all of you are doing will continue despite the renovation that is going on around you. Because what all of you are doing exemplifies what we are all called to do, and to be.  We might wish we had more members. We might wish we had more resources. We might wish for just one more staff member in Louisville.  The truth is that, no matter how many members we have, no matter how extensive our resources are, no matter how many staff people are in Louisville – the truth is that the Gospel imperative continues: Do justice. Love kindness. Walk humbly with your God.

That is a message that the world needs to hear now more than ever.  Thank you for being in the forefront of proclaiming that message.