Make A Donation Click Here >
Home › Malawi: The Pandemic Has United the People 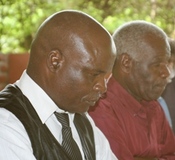 On Saturday, March 1, the Rev. Lecton Kaluah, Secretary General of the Church of Central Africa Presbyterian (CCAP), and Kafumbi Njewa, administrator for the CCAP General Assembly, joined us after breakfast.

The CCAP traces its history back to the efforts of the Church of Scotland and the Dutch Reformed Church. The General Assembly is located in Lilongwe. Among other ministries, it coordinates the evangelism work of the church’s synods.

The Rev. Kaluah and Kafumbi, a former broadcaster who has launched the Landirani Trust that cares for children, noted several ways in which the HIV/AIDS epidemic affects pastors and the church:
· Members are lost
· Evangelism efforts are disrupted
· An increase in the amount of pastoral care that involves meeting physical, emotional, and spiritual needs
· An increase in the number of deaths—some pastors may be called upon to do several funerals in a day
· Pastors may spend as much as three-quarters of their time doing funerals and attending the sick
· Funerals take place as soon as possible after a death, sometimes even on Sundays, because there will be more funerals

At the same time, they expressed hope for the future—hope rooted in faith in Jesus Christ. They named several encouraging signs in which they saw that hope being made real. The CCAP has a policy that states that pastors are to speak about HIV/AIDS. Some are doing that. The government of Malawi has made a commitment to address HIV/AIDS. People within the church are talking about HIV/AIDS. Information is being shared; fear is slowly being diminished. The pandemic has united the people and the churches to engage in efforts to respond. Those efforts are making gradually progress.

The Rev. Kaluah and Kafumbi see God at work among the people of God. After praying with them, we went to our bus to travel north and see that for ourselves.