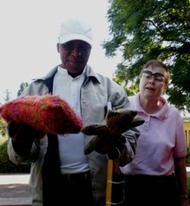 Kopano ke Matla Toant’song ea Bofuma Lesotho (Unity Is Strength in the Fight against Poverty) is the Joining Hands against Hunger network in Lesotho. Initiated in 2002 through the Presbyterian Hunger Program, KKM is one of nine countries currently involved in JHAH. JHAH is unique in its approach of defining systems, or root causes, of poverty and hunger and strategizing responses to local hunger and poverty issues.

This is done by uniting a network in a country and a PC(USA) presbytery around a partnership based on mutual education, exchange, campaigns for peaceful social change, advocacy, accompaniment, and mutual transformation. KKM’s partner presbytery is Los Ranchos.

The Lesotho network’s foci for 2008 are food sovereignty and HIV/AIDS as they are closely linked, key issues in the country. One response is directed at organic farming methods and the use of indigenous seeds and advocating against Genetically Modified Organisms and chemically based fertilizers and sprays. KKM also supports efforts of several organizations addressing human rights abuses recently described by a regional lawyer’s association as reflecting a “breakdown in the rule of law in the country.”

Thabang Letela, KKM director, and Cindy Easterday, Companionship Facilitator, joined the seminar participants for our time in Johannesburg. Representatives of each of the JHAH networks, including Thabang and Cindy, will participate in the 2008 Peacemaking Conference – July 15-19 at Chapman University in Orange, CA.

Photo: Thabang Letela and Nora Goetz look at teddy bears that will be delivered to a number of HIV/AIDS projects. Photo by Amanda Craft.