Make A Donation Click Here >
Home › You are not alone 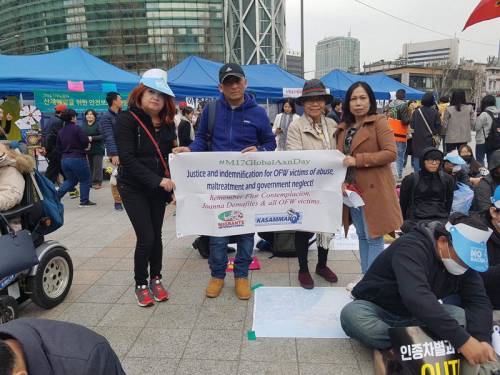 PHILIPPINES — Lucia Santos, a young Filipino marriage migrant, lost her Korean husband in their fifth year of marriage. Their two little children awoke one morning without their father at their side. She discovered that her husband had died by suicide.

Santos could not comprehend the true reason why her husband had ended his own life. Before his death, her sisters-in-law often intervened in family affairs. Now they expressed their utmost desire to take their nephew and niece away from their mother because they perceived that she could not raise her children well. Their relationship became sour.

“I am their mother and I have the right to take good care of them. I am young and able,” Santos insisted. Still, her sisters-in-law persisted, filing a child custody case against her in court. The young mother approached the Rev. Gloria De La Cruz-Hernando to ask for help. De La Cruz-Hernando served as an ecumenical worker from the United Church of Christ in the Philippines (UCCP) with the Presbyterian Church of the Republic of Korea from 2004 to 2018. Her pastoral care for marriage migrants comes from the values of the reign of God, recalling Hagar and her son, Ishmael (Gen. 21:8–21), which compels her to minister without ceasing to isolated and outcast women in society.

As her pastoral counselor, De La Cruz-Hernando accompanied Santos in her quest for justice, and she won her legal case. With a thankful heart, Santos now lives happily with her children and always shows courage in the face of adversity. Her mother came from the Philippines to assist her. To earn a living, Santos works as a housekeeper at a hotel in Seoul, South Korea, and her children receive monthly subsidies from the Korean government.

Although De La Cruz-Hernando recently returned to the Philippines, there are other UCCP pastors working in other places in the world, such as the Rev. Fred Carmelo in the United Arab Emirates and the Rev. Joram Calimutan in Hong Kong. Last June, Carmelo moved to the United Arab Emirates to pastor two emerging worshiping communities in Dubai and Abu Dhabi. He has guided the Dubai members to find a consistent place of worship. He also is nurturing the Abu Dhabi members toward financial stability. Both communities and members often struggle financially, and the pastor provides pastoral care and assistance. Carmelo emphasizes how companionship and financial support mechanisms are important for those who are living alone and are looking for possible jobs and for those who are terminated from their companies.

Nathan Rodriguez doesn’t let his personal problems get in the way of sharing pastoral care with church members. He models his ministry according to “what the apostles did during Pentecost in Acts 2, by helping and sharing among the members of the faith community.” Due to the change of his employment contract that left him with few options in the United Arab Emirates, he is vulnerable to deportation. In Filipino, he is TNT, or tago ng tago, loosely translated as “always hiding.” For the past three years, he hasn’t been able to leave and visit his wife and children in the Philippines. Despite this status, he worships regularly with other Filipinos and serves as an elected church leader. He has received pastoral care through prayer, counseling and financial assistance from the pastor. During the next few months, if Rodriguez doesn’t find a stable job, he said he will return to the Philippines. 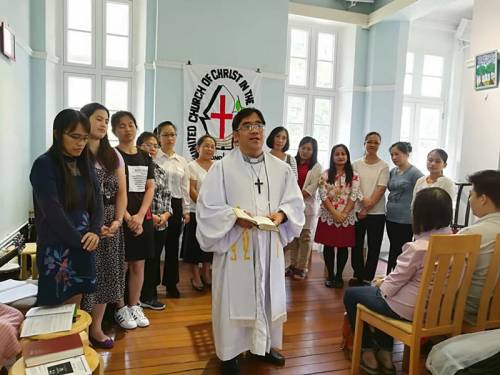 The Rev. Joram Calimutan conducts an installation service for 2019–20 council leaders in the United Church of Christ in the Philippines. (Photo provided by Joram Calimutan)

Since 2016, the Rev. Joram Calimutan has served both as an ecumenical worker with Asia Pacific Mission for Migrants and a volunteer pastor for a UCCP-Hong Kong fellowship called UCCPians that consists primarily of domestic workers in Hong Kong. He and his wife, Edwina, live at Bethune House, a temporary shelter for migrant workers who are seeking resolution in cases against their employers. Edwina serves as its executive director. Blending his roles as an advocate, educator and organizer, Calimutan shapes his pastoral care around the everyday experiences of migrants and their families. Together they struggle for human rights, justice and decent work, and they stand against all forms of abuse, exploitation, modern slavery and trafficking that negate their dignity.

Pastoral care that is grounded in the struggle for human rights empowers another member of this Hong Kong fellowship. For the past three years, Ann Ocampo already worked as a domestic worker. Before making this difficult choice to leave her family, Ocampo had already suffered other challenges, such as the disappearance of her husband and constant need to move to protect herself and her children. Ocampo and her children’s needs for protection and survival connected her more concretely with the lives of migrants and their families. While previously working in a local church in the Philippines, she noticed how church members faced various issues and challenges in their lives. As a human rights worker, she met different people with common concerns. In those years, she heard only the concerns and issues affecting the migrant workers being articulated in the forum and discussions. It never came into her mind and her dreams that she would later become a migrant worker. When she applied for the job, she was exposed to many of the issues and concerns encountered by migrants.

While UCCP pastors serve in the same countries as overseas Filipino workers, the families left behind also require pastoral care, often from UCCP pastors and fellow church members. While serving her local church, the Rev. Roceni Bakian, one of the Presbyterian Peacemaking Program’s International Peacemakers in 2018, assisted a husband and his children after his wife/their mother went to France. His anxiety initially overtook him, but thankfully, with the care of the church staff and members, he could create new daily routines and still care for his daughters while regularly communicating with his wife. Through this situation, Bakian appreciated how family members require pastoral care, and realized that all pastors should be fully updated about the migrant situation. 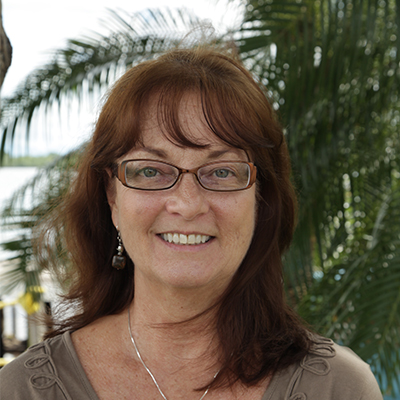