Each day, the Rev. Jenny McDevitt uses writing as a spiritual discipline 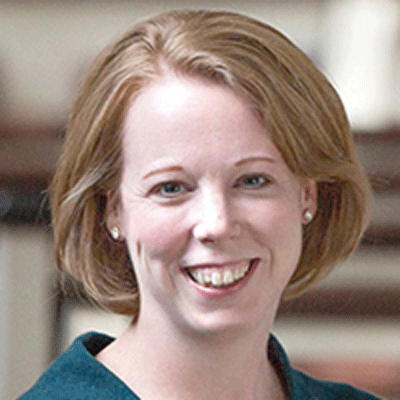 LOUISVILLE — You can find examples Rev. Jenny McDevitt’s creative spark on her Instagram site, found here. To hear about where that spark came from, listen to her Wednesday conversation with the Rev. Dr. Lee Hinson-Hasty of the Presbyterian Foundation and the  host of Leading Theologically, which can be found here or here.

“When I read your prayers and liturgies [on Instagram], it does feel like a story. There’s something autobiographical happening. It’s beautiful,” Hinson-Hasty told McDevitt. “That’s the start of your creative process — what’s happening right where you are.”

“In all my different churches and contexts, I learned there’s all sorts of times and moments in ministry that we get to connect with people, influence people and offer them a thought or a word,” McDevitt said. “Worship is one of the times you can do that with the most people.”

“When I’m at my best I put as much time into the printed liturgy — maybe not exactly the same amount of time — but quite a bit of time, because I’m mindful that’s where we’re asking the gathered people to speak words out loud and to give them the opportunity to speak the gospel out loud,” McDevitt said. “It can be transformative, and so I try to give careful thought and consideration to those words, because it’s a different thing to put my words into someone else’s mouth.”

Hinson-Hasty asked whether McDevitt published anything she wrote in college, which produced one of many smiles McDevitt displayed during the half-hour broadcast.

“All of us should have something we look back on and say, ‘You know, that was really lovely — and it’s lovelier that it’s in the past,” McDevitt said.

McDevitt went to Union Presbyterian Seminary convinced she’d never be a pastor. “I couldn’t imagine figuring out something to say to people consistently,” McDevitt said. But “once I got to seminary and started engaging the process, it quickly shifted the direction I was headed in.”

At Village Church, the senior pastor, the Rev. Tom Are, Jr., asked McDevitt to write the printed liturgy each week. “There were times when it came really easily and times when I thought, I have nothing more to say about how we will confess our sins this week,” McDevitt told Hinson-Hasty. “Because I wasn’t preaching [often] I was able to dig into the text the preacher was using and do almost a little bit of preaching preparation.”

McDevitt eventually reached the practice of relating a brief story each Sunday as a way of introducing the prayer of confession. She’d tell the congregation where she’d found God’s grace in her life during the week. “It got to the point where lots of people in the congregation were telling me they were looking for those moments in their lives,” McDevitt said. “That’s when I realized there is the potential for liturgy to be just as transformative as a sermon.”

She said she keeps a mental file of some of the writing she’s had to trim before it’s published. “I will say, ‘That was a great line about Pentecost,’” McDevitt said, “and that actually shows up every year.”

“Sometimes, what we write is jut an offering for what it is,” McDevitt said. “It doesn’t have to be immensely polished. Not every word needs to be perfect.”

Asked to name some of those who helped shape her and her writing, McDevitt named James S. Lowry, author of “Prayers for the Lord’s Day,” as well as a pair of beloved clergy/authors, Frederick Buechner and Barbara Brown Taylor, about whom McDevitt said, “I wonder why any of us try.”

“She gives permission to imagine well beyond what the [biblical] text itself might say. I find that to be a really fulfilling part of my process,” McDevitt said. She also credited the influences of Are and the Rev. Dr. Rodger Nishioka, another former colleague at Village Church. “I was fortunate to work with them. Because they are my friends, I tell them they are stupid talented,” McDevitt said with a laugh. “I learned a lot from working with them and listening to them, but they were also very affirming and gave me the space to try something.”

When Hinson-Hasty asked McDevitt for a benediction, she turned to the words given to her and her classmates by their Hebrew professor at Union Presbyterian Seminary, the Rev. Dr. E. Carson Brisson.

“I asked him if I could use it,” McDevitt said. “I told him not too long ago that I still use it every week and he just looked at me and said, ‘Well, surely you can do better than that.’ I have always loved it.”

Then McDevitt blessed listeners with Brisson’s words: “May joy and nothing less follow you all the days of your life. May you be blessed and may you be a blessing, and may you rest well today, secure in the knowledge that the Lord of Light, who has brought you this far already, will lead you and countless others all the way home. Amen.”