Make A Donation Click Here >
Home › ‘Whenever you stand for justice, love and inclusion, you stand with God’ 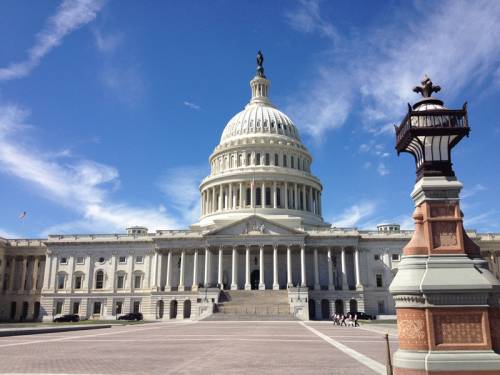 The U.S. Capitol Building (Photo courtesy of the Office of Public Witness)

LEXINGTON, Kentucky — Wednesday was Epiphany, the day that marks the end of the Christmas season and God’s revelation of hope to the Earth in Jesus Christ.

This year’s observance, the Presbyterian Church (U.S.A.) Office of Public Witness (OPW) points out, was marred by the violent mob of supporters of President Donald Trump that stormed the U.S. Capitol Building Wednesday afternoon as Congress was certifying Joe Biden and Kamala Harris’ election as President and Vice-President of the United States.

“This was an alarming and sobering reality of the divisions within our country and the danger posed by those who are guided by extremist ideology,” OPW coordinator the Rev. Jimmie Hawkins said in a statement.

“The Office of Public Witness strongly condemns the actions of President Donald J. Trump and his followers. These actions were not just an attack on the Capitol Building, but an attack on American democracy. There must be a demand for accountability on the part of the president, or else the rule of law means nothing. It cannot be applied to some, but not to all.”

The physical offices of the Office of Public Witness are directly across the street from the U.S. Capitol Building. No one was working there Wednesday, as the office has been closed since March and employees have worked from home due to the COVID-19 pandemic. But the staff is very familiar with the Capitol and the area where the attack took place.

As the day Congress certified the electoral college vote approached, Trump encouraged supporters to come to Washington, D.C., repeating false claims of voter fraud in an effort to overturn the results of the November election, which saw Biden and Harris win. Trump spoke at a Wednesday afternoon rally near the Capitol where he told supporters to keep fighting. A portion of the crowd peeled off and went to the Capitol, eventually breaking past police barricades and entering the building, including the House of Representatives and Senate chambers and offices of officials including Speaker of the House Rep. Nancy Pelosi (D-California). The elected officials had been evacuated to a secure location.

“They broke windows, spray-painted walls, ransacked offices, and left threatening notes,” Hawkins’ statement said. “Two pipe bombs were left outside of the DNC and RNC local offices. A cooler of Molotov cocktails was discovered in a parked car. Members of both houses were ushered into safe locations for their well-being knowing that their lives were at risk. Many are still shaken by what happened.”

The attack resulted in four deaths.

“The Office of Public Witness mourns the loss of life that occurred and we pray for the four families now in mourning,” Hawkins wrote.

Since the attack, Hawkins noted there have been widespread calls for President Trump’s removal from office, either through impeachment or the 25th Amendment, which provides a process for removing a president from office if they’re no longer capable of performing their duties. He also noted that many people, including U.S. Sen. Mitt Romney (R-Utah), have called senators and representatives who joined in calls to not certify the election “complicit” in Wednesday’s events.

The statement stops short of endorsing either of these views and turns back to Epiphany.

“Epiphany proclaims hope in the midst of despair,” Hawkins writes. “Let not the destructive events of yesterday derail us from our goal of liberty and equity for all. No amount of resistance will quell our resolve to fight for freedom, justice, and democracy for all people.

“Our country is changing and there is resistance, much of it through violent acts and rhetoric. But we will prevail because whenever you stand for justice, love and inclusion, you stand with God.”