Inspiring faith in our youth. Support the Pentecost Offering.
Make A Donation Click Here >
Home › ‘What democracy requests of us’

Columbia University prof: We must see in our neighbor what we see in ourselves 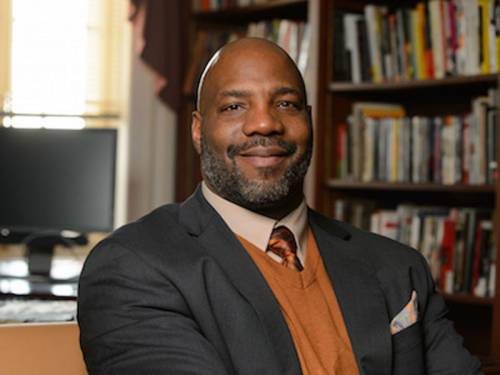 LOUISVILLE — Dr. Jelani Cobb, a staff writer at the New Yorker, historian and the Ira A. Lipton Professor of Journalism at Columbia University, concluded a lecture before an audience at the University of Louisville Wednesday with a personal story that may say as much about race relations in the U.S. as the hour-long lecture that preceded his story.

Cobb, who was delivering the lecture “The Half-Life of Freedom: Race and Justice in America Today,” the 13th Annual Anne Braden Memorial Lecture, said he took a flight from Atlanta to New York City shortly after the 9/11 terrorist attacks, “when flying was still nerve-wracking.”

A bearded, olive-skinned man boarded the aircraft after Cobb. He sat down in his aisle seat one row behind Cobb. “If you had a mental image of a Muslim, it would look like him,” Cobb said. “You could see the tension ratcheting up.”

Cobb asked the man where he was from. The man replied, “Where are you from?” It was an appropriate response, Cobb reasoned.

“I’m from Queens,” Cobb told the man, “and I’m asking because I think you are also from Queens. If you are who I think you are, we were in the same break dance group in high school.” Cobb’s memory was confirmed, and the tension from his fellow passengers quickly melted away. “Oh, he’s a break dancer,” Cobb figured they were thinking. “He’s not going to kill us.”

“In the end, we hugged, but it occurred to me later that it was easy to see him and project stereotypical ideas we have been taught,” Cobb said. “What I saw was the best break dancer I knew as a young person. I saw and old friend from my community whom I had not seen in many years.

“I think that’s the metaphor in microcosm. That’s what democracy requests of us,” he said. “We have indulged the idea to disastrous ends that it is possible to hold onto racism and democracy simultaneously.

“The perennial concerns we have and the calamities we have witnessed should warn us again about the imperative … to see in our neighbor what we see in ourselves,” Cobb said. “That is the cause that is left to us by the great figures of the past, the cause we are all required to commit to if we truly believe in the possibility of democracy in this country.”

Cobb shared a conversation he had recently with historian Eric Foner, an emeritus professor at Columbia University who’s recently published “The Second Founding: How the Civil War and Reconstruction Remade the Constitution.” The book is described as “a timely history of the constitutional changes that built equality into the nation’s foundation and how those guarantees have been shaken over time.”

The upshot of the conversation, Cobb said, is that American democracy is much younger than the U.S. Constitution. It didn’t begin, Foner argues, until the passage of the 13th, 14th and 15th amendments.

Or, the historians discussed, maybe true democracy began in 1920 with the ratification of the 19th Amendment granting unrestricted suffrage nationwide to women.

It could be argued democracy didn’t really begin until 1965, when President Lyndon B. Johnson signed into law the Voting Rights Act. However, a majority of the U.S. Supreme Court eviscerated a key provision of that landmark legislation in 2013.

“If we are honest,” Cobb said, democracy “doesn’t look like a straight-line progression from 1776. During moments we fall away into an anti-democratic fervor, mostly about race, it looks more like an EKG (reading).”

During a question-and-answer session following his talk, Cobb said that while he’s uncomfortable quoting a Tweet he once sent, one is on point for the topic at hand: “Civility is the coward’s preferred virtue.”

“I don’t believe in papering over real differences with a patina of niceness,” he said, adding that during the years leading up to the U.S. Civil War, legislators, justices and members of the executive branch were, in the name of civility, “willing to tolerate the dehumanizing of people. Niceness doesn’t ameliorate the problem.”

Asked if we’d be better off drafting a new Constitution, Cobb said the problem with revolutions is that they “tend to give life to reincarnate forms of the same problems that the revolution sought to upend in the first place.”

He did offer gratitude to people who worked well past their retirement years to reform the system, including Braden herself, an activist, organizer and journalist.

“People trying to reform the system” in the areas of civil rights, the labor movement, the women’s movement, the anti-war movement and the LGBTQ+ movement, “those people actually made fundamental changes, and we all benefit from the changes they worked for.”

He said most Americans “recognize the need for progress when it is in our collective self-interest.”

“The optimist in me says that William Barber (who along with the Rev. Dr. Liz Theoharis, a Presbyterian pastor, co-chairs the Poor People’s Campaign), the great articulator of a cause, can change hearts,” Cobb said. “The more skeptical part of me says that people recognize their self-interest and then act accordingly.”

Then the professor gave the young people in attendance this assignment:

“Young people,” he said, “it is your responsibility to be the great articulator of your causes and the bridge that holds people together until they realize what’s just and equal is also in their self-interest.”