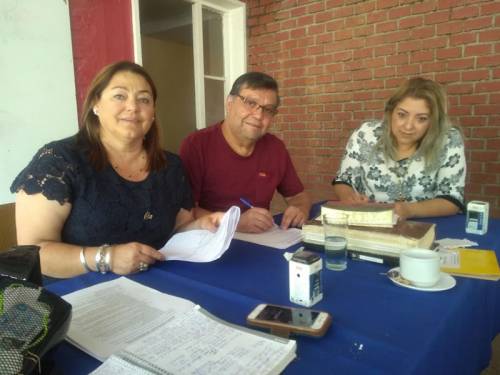 From left are the Rev. Jacqueline Troncoso, Moderator; the Rev. Patricio Ávila, Executive Secretary; and the Rev. Patricia Cruz, Recording Secretary of the Board of the Evangelical Presbyterian Church in Chile. (Photo by Dennis Smith)

BUENOS AIRES — Urgency filled the room. On January 19, the Rev. Jacqueline Troncoso had just been elected as moderator of the Evangelical Presbyterian Church in Chile (IEPCh), the first woman to hold this post. The Synod assembly had just approved a powerful pastoral letter calling on all Chilean Presbyterians to support the drafting of a new national Constitution.

Troncoso describes a nation in turmoil. Massive student protests broke out in October 2019 and have been met with repression by the security forces. Extremists have damaged public transport and even burned churches. The gap between rich and poor is growing quickly in Chile; trust in government and social institutions is deteriorating rapidly.

Protesters call for fundamental reforms to pension, healthcare and educational systems that have become expensive and highly exclusive. Even the nation’s water resources have been privatized. All these measures are the product of a Constitution that dates to the 1980s, the time of the Pinochet dictatorship. In this context, many voices in Chilean society call for drafting a new Constitution.

Troncoso speaks of the urgent need for churches to lift their prophetic voices in support of justice and in defense of the most vulnerable sectors of Chilean society. However, so far in this crisis, both the Roman Catholic church and some large Protestant churches have been largely silent because of their own internal scandals, including both sexual abuse of minors and financial malfeasance. In this vacuum, some neoconservative megachurch pastors are actively defending the existing constitution under the guise of promoting “traditional values”.

At the Synod meeting, many delegates lamented how these “religious entrepreneurs” – energetically pursuing both material wealth and partisan political power – have hijacked the public space for ethical discourse traditionally occupied by historic churches. Delegates admonished Synod leaders to provide local congregations with pastoral guidance in this difficult time and to take a strong public stand in support of a new Constitution.

This is expressed in the Synod’s Pastoral Letter:

We, as part of the Body of Christ, seek a new society and accept the challenge of contributing to change in our country. We will participate in, support, contribute to and vote to approve a new political Constitution for our country that reflects the high values and principles characteristic of modern democratic societies, guaranteeing the rights and responsibilities of all of us who live in and love this nation … From our roots in the Reformed tradition, we deeply desire to witness the birth of a new nation, a new society built on truth where justice flows like a stream of living water … We fervently maintain and defend the dignity of all persons, created in the image and likeness of God, as a visible sign that we are walking into new life in Christ Jesus.

Rev. Dr. Darío Barolín, Executive Secretary of the Alliance of Presbyterian and Reformed Churches of Latin America (AIPRAL), and Dennis Smith, PCUSA Regional Liaison for South America, brought greetings to the Synod and assured participants of the prayerful accompaniment of other members of the Reformed family in these challenging times. After the Synod, they met with the Council of Historic and Protestant Churches of Chile, a body that includes Anglican, Baptist, Methodist, Lutheran and Presbyterian churches, to discuss advocacy strategies and how the world ecumenical movement can support Chile at this time. The Council is chaired by the Rev. Dr. Jorge Cárdenas, who also serves as Vice Moderator of the IEPCh.

Troncoso, in addition to her new position as Moderator, also serves as Moderator of her Presbytery and Pastor of Mercy Presbyterian Church in Taltal, Chile. “Because we are a small church, some people become discouraged,” said Troncoso. “But I see signs of vitality. I see my in-laws — now in their 90s — sharing the pew with children and youth. I listen to the discussions in our churches; members are deeply concerned about the deep divisions in our society. Now is a time when we must learn again how to listen to one another, how to demonstrate tenderness and love. The system in which we live discounts the elderly; pensions are so low that they must keep working. The system also discounts our youth; unemployment is high and university is terribly expensive. That’s why it is also a time when we must believe that change is possible.”

Please pray for our mission partners in Chile: The Evangelical Presbyterian Church in Chile and the Evangelical Theological Community. 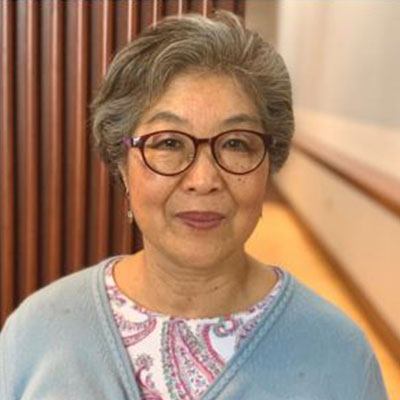