Unzu occasionally returns to the U.S. and is available to speak to congregations. Email her to extend an invitation to visit your congregation or organization.

Unzu Lee is the regional liaison for East Asia, focusing on Christian witness through ecumenical engagement in South Korea, North Korea, and Hong Kong. She provides support for partner churches, strengthens the work of mission personnel by providing guidance and pastoral care, and implements regional strategies. She works with the National Council of Churches in Korea in South Korea, the Korea Christian Federation in North Korea, the Hong Kong Christian Churches, and the Ecumenical Forum for Korea–a worldwide collaborative endeavor of Christians for Korea peace and reconciliation.

More than 1.5 billion people, about 38 percent of the population of Asia or 22 percent of all the people in the world, live in East Asia. East Asia is the home to many religious and spiritual traditions. In terms of Christian presence South Korea has the highest percentage of Christians of any other East Asian nation. Chinese Christianity, once dormant has experienced remarkable growth in recent years, while the percentage of people claiming to be Christians in North Korea is relatively small. About 14 percent of the people who live in Hong Kong is estimated to be affiliated with either Protestant or Catholic church. One of the major conflicts that characterized the world in the 19th and 20th centuries was the conflict between the East and the West. Most notably, the British empire and the Chinese empire were involved twice in the “opium” war in the 19th century. China’s loss led to Hong Kong becoming a British territory in 1841. 156 years later, in 1997, it was returned to Chinese sovereignty. Today Hong Kong is a Special Administrative Region (SAR) of China. At the time of the “handover,” the citizens of Hong Kong felt pride in being reunited with the motherland but also uncertainty over their future under Chinese rule. Over time much has happened: the Asian economic crisis, the SARS epidemic, demonstrations against proposed subversion laws, the ongoing struggle for constitutional reform, the “Occupy/Umbrella Movement” for democratic elections, and the anti-extradition bill protests in 2019. While Hong Kongers have extensive social, economic and political ties with the motherland they are also passionate about preserving Hong Kong’s unique heritage, freedoms, and status as one of the leading global cities in China.

The relationship between Japan and Korea is complicated and painful. Japan emerged as a hegemonic power in Asia in the 19th century. Japan began to establish a pan-Asian Japanese empire by conquering territories and subjugating the peoples in its conquered territories. Among these “territories” was Korea. Korea looked forward to independence when Japan declared its defeat on August 15, 1945 believing that its former colonies would be granted freedom. In the case of Korea, however, something unthinkable happened. When Japan left, the Allied Powers divided Korea into two along the 38th parallel, with the Soviet troops occupying the region north of the 38th parallel and the US troops occupying the region south of the 38th parallel. The rivalry between North and South to control the whole peninsula led to the outbreak of the Korean War on June 25, 1950. Open hostilities that left millions of people dead were brought to a fragile truce with the signing of an armistice by the US, China and North Korea on July 27, 1953. According to the agreement, a peace process was to start within three months, but a peace treaty has not yet been signed. In the meantime, about nine out of the ten million people who were separated from their families on the other side of the division have died without ever finding out whatever happened to their loved ones on the other side. The US still has its troops in South Korea; the US-led UN Command still controls the Demilitarized Zone; and is in command in South Korea in times of war. The Korean War was the first major conflict of the Cold War, and it has not ended.

Unzu will serve as a liaison and bridge-builder among the ecumenical entities in South Korea, North Korea, and Hong Kong and work for Korea peace and reconciliation through a global network Ecumenical Korea Peace. Through authentic listening, she hopes to contribute to increasing the level of trust that the ecumenical partners have in each other. Trust in each other will help partners to see the possibility for ministries that are mutually transformative, especially in the area of peacemaking. Unzu’s commitment to peacemaking stems from her personal experience. She writes, “I was born on an island off the southern coast of the Korean peninsula called Jeju where my parents had sought refuge from the Korean War. Although they were both in Seoul when the War broke out, they each grew up in what is now part of North Korea. Living in divided Korea, my parents were never able to return to their birthplace and childhood homes during their lifetime, and I grew up never knowing my extended family in North Korea, including my paternal grandfather, aunts and cousins. Pyong Yang, now a capital of North Korea, was once called Jerusalem of the East because it was the center of the Christian missionary activity. That is where my mother grew up, and her family attended the church founded and ministered by Rev. Samuel Moffett, a Presbyterian minister, who is known to have established as many as 1,000 churches and 300 schools in the northwestern part of Korea in which Pyong Yang is situated. My grandmother knew Rev. Moffett intimately.”

Unzu is a fifth generation Presbyterian of Korean heritage who has served the PC (USA) as a Minister of the Word and Sacrament for 25 years. Her grandmother’s intimate connection to this iconic American missionary to Korea makes her undeniably a product of the U.S. mission. Unzu asserts, “As an Asian American Christian of Korean descent, I find it a great blessing to be called into this mission work that connects the US and Asia.” She believes that people of faith have a unique role to play in a world increasingly being torn apart by the interests of the powerful who see the world from the perspective of scarcity. She says, “I agree wholeheartedly with Rev. Dr. Martin Luther King, Jr., who proclaimed, ‘Injustice anywhere is a threat to justice everywhere. We are caught in an inescapable network of mutuality tied in a single garment of destiny. Whatever affects one directly affects all indirectly.’ The gospel of Jesus promises abundant life for all (John 10:10b). We are called to live into that promise.”

Her sensitivity emerges from her awareness of the tension that exists between the countries in the region as well as between the region and the U.S. In reference to the existing tension in the region, she mentions the protests that erupted in Hong Kong in 2019. She feels that often we in the U.S. often do not have a clear appreciation of the nature/dynamics of the conflict happening in far away places like in Hong Kong which was returned to China after 156 years of British rule. She says, “This makes the ethos and way of life of Hong Kong very different from those of mainland China. In addition, the relationship between the People’s Republic of China and the U.S. is very tenuous. It will be very important for Martin (who covers China) and me to work together to be Christ’s witness. History shows that Christian churches have not always been on the right side of God’s salvation history.”

On Korea, she says, “There has been too much suffering on both sides. Some of the US soldiers who participated in the Korean War never came home. South Korea, whose landmass is extremely small (about the size of Indiana), ranks the sixth in the world in terms of its military power. Koreans in the North have lived under severe sanctions since 1953, and even humanitarian aid cannot reach them these days. I feel called to help bring an end to this 70-year-old conflict on the Korean peninsula and to work for peace.”

Unzu shares a story about attending a meeting at the Interchurch Center in NYC while she studied at Princeton Theological Seminary. “Members of the NCC-USA had just returned from a visit with members of Korean Christian Federation in North Korea. It was the very first time that U.S. Christians had met with Christians in North Korea since the division. Knowing that they had also paid a visit to South Korea after their visit to North Korea, I asked one of them, ‘How was it to visit South Korea after visiting North Korea?’ Her answer was, ‘The same azaleas that were blooming in North Korea were also blooming in South Korea.’ I have never forgotten the impact those words had in my hearing. God’s love knows no boundaries. May I be a witness to that kind of love.”

Watch a video of Unzu Lee 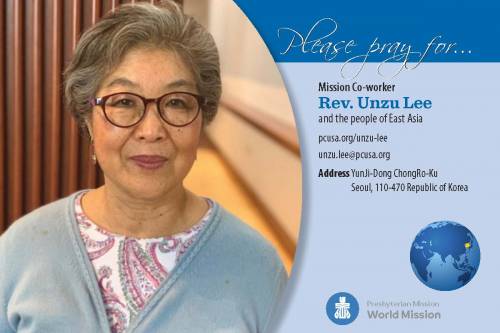 Unzu Lee is the regional liaison for East Asia, focusing on Christian witness through ecumenical engagement in South Korea, North Korea, and Hong Kong. She…

Give in honor of the ministry of Unzu Lee