Make A Donation Click Here >
Home › ‘We have nothing but hope’ 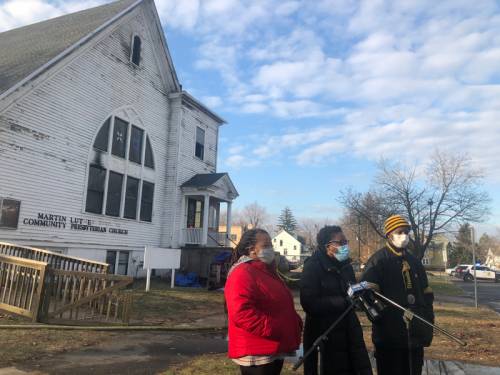 LOUISVILLE — When Ruling Elder Lisa Baker got to see the inside of her beloved Springfield, Massachusetts church after it was ravaged by fire last week, she couldn’t believe what she saw.

The predominantly Black Martin Luther King Jr. Community Presbyterian Church sustained at least $100,000 in damages in a suspicious Dec. 28 blaze that has shaken the church but not the congregation’s resolve.

Baker received a call about the fire in the early morning and arrived at the church while emergency workers were still on the scene. “It was other-worldly,” she said of the experience.

“The fire commissioner was there, and he allowed me to go inside with our general presbyter, and I saw the interior of our sanctuary,” Baker said. “That was like somebody punched me in my gut and all the air got taken away.” 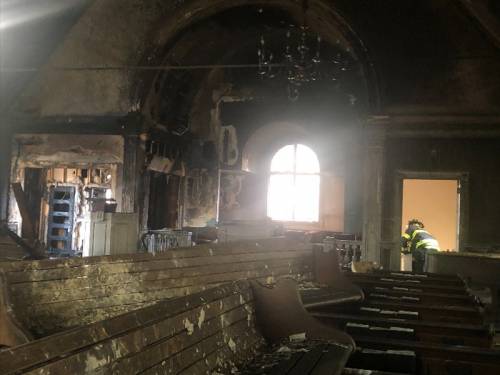 Instead of a place where there had been light, “what I saw was just an ashen cavern,” she said.

The fire is still under investigation. Meanwhile, Dushko Vulchev of Houlton, Maine, has been charged with several counts of malicious damage and three counts of attempted arson, according to MassLive.com. He has pleaded not guilty and bail was set at $25,000, according to the MassLive.com website.

Authorities believe Vulchev tried to burn the church on Dec. 13 and twice on Dec. 15 but have not charged him with the Dec. 28 fire, MassLive.com reported.

“It is very painful to think about someone intentionally setting a church on fire,” said MLK’s pastor, the Rev. Dr. Terrlyn Curry Avery. 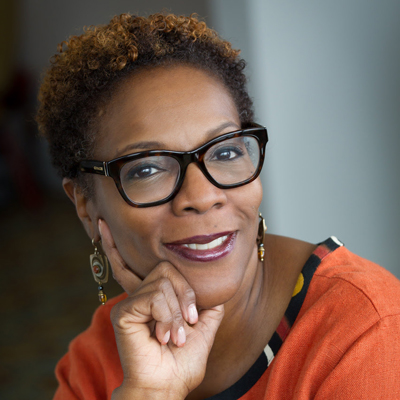 She believes the burning of the building was racially motivated and possibly a hate crime, having been perpetuated on a sacred temple with a Black congregation.  Whoever started the fire “didn’t go burn a white church.”

But the congregation won’t be deterred by the setback. It’s important to remain “spiritually focused on what God would have us to do in this time and place, and some of that is to dismantle racism, and I think that it would be very important for our Presbyterian denomination to look this in the face and call it what it is,” she said.

Curry Avery went on to say: “Given the history of the Presbyterian Church as it relates to racism, this is an incredible time for us to look at what has happened and say: ‘What is God calling us to do in this time, in this place as a church denomination?’”

Because of the pandemic, the congregation has been meeting online since March, so services haven’t been interrupted by the fire.

Most members have been part of the church for decades, so it’s part of their blood as well as their Christian walk, said Baker, a member herself since 1996.

The recovery of the building and ministry will require a great deal of thought and financial support, Curry Avery said. “Right now, we’re still trying to get our footing,” she said. “It’s still very new.”

Presbyterian Disaster Assistance is among those trying to help and has approved a church damage grant.

The grant “is intended to support the continuation of ministry,” said the Rev. Jim Kirk, PDA’s Associate for Disaster Response in the United States. “We hope that the funds will be sent the end of this week or possibility next week.”

Two members of the church, Baker and Carl Edmonds, are members of PDA’s National Response Team. PDA is virtually deploying a team to support the congregation and congregational leadership.

Meanwhile, church leadership is expressing optimism about the future.

“We have nothing but hope that God’s got a much bigger plan for us than we could have envisioned” in the past, Baker said.

Similarly, Curry Avery is looking forward to the church gaining not only a new building but “new purpose and new vision that has already been undergirded by what we’re doing during this season.”

The church is a fixture in the community, with a rich history of civic engagement, Baker said. “We’ve touched a lot of lives here in Springfield,” and helped many people to find Christ or deepen their love of him, she said.

Throughout the past year, the church has been addressing voter apathy through We the People of Mass, a collaboration with Alden Baptist Church that has included town hall meetings and discussions around pertinent topics, such as mass incarceration and voter fraud.

Such efforts to make an impact in the community will continue despite the fire. “The church building does not stop us from doing the work that we’re called to do,” Curry Avery said.

Donations can be mailed to the church at 14 Concord Terrace, Springfield, MA 01109. They can also be made online by clicking here. Another option is to donate to the PDA account that funds damage grants.

PDA is one of the Presbyterian Mission Agency’s Compassion, Peace and Justice ministries and is funded by your gifts to One Great Hour of Sharing.