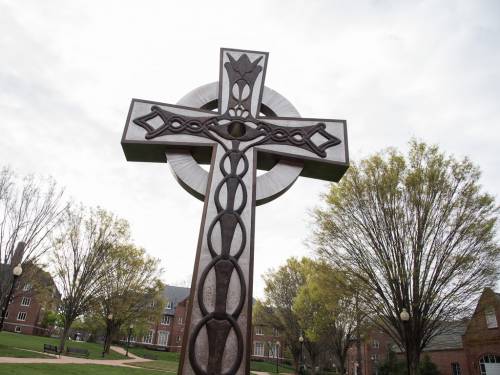 A large cross in the courtyard of Columbia Theological Seminary. (Photo by Gregg Brekke)

DECATUR, Ga. – The Way Forward Commission of the Presbyterian Church (U.S.A.) gathered at Columbia Theological Seminary on March 5-7 for its second face-to-face meeting. Commissioners discussed the work and progress of subgroups, took action to ensure collaboration and communication with the Six Agency Review Committee, and mapped their future course of action.

Commission Moderator Mark Hostetter began the progress update of the group since its Feb. 7 conference call with a discussion of the Feb. 9 “Chairs and Chiefs” meeting in Philadelphia. Hostetter presented to and heard from the heads of the PC(USA)’s six agencies, along with the Moderators of the 2020 Vision Team and the Six Agency Review Committee.

“It was an interesting conversation,” he said. “Rather than having each agency talk about how great they were doing, they were talking about how they were collaborating together.” 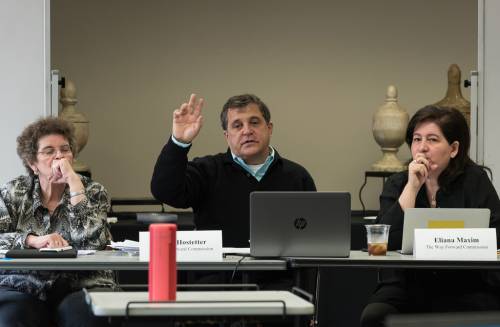 Hostetter’s “big picture observations” from the meeting included his perception that the sense of urgency encouraged by the Way Forward Commission and other review committees is present in the words and actions of the agencies along with improved connections with the work of presbyteries and congregations.

Turning his attention to what he’s heard from the Six Agency Review since its Feb. 21-23 meeting, Hostetter noted the desire for a better process by which the review committees could all share information. The formation of a “coordination committee” for each review group was proposed by the Six Agency Review that would provide updates across groups and provide a mechanism to “talk about overlap and prevent duplication of efforts.”

The commission then went into closed session to have private discussions involving personnel, property or litigation matters with former Stated Clerks Gradye Parsons and Cliff Kirkpatrick. No actions were reported from this closed session.

Commission member Sam Bonner updated the group on results from the now-closed Way Forward Commission survey. The survey, which was open to all members of the PC(USA), received 191 responses.

“It’s remarkable how involved the congregations of the denomination are in this survey,” he said. “It was clear throughout the comments there’s a clear concern [along with] well wishes and desire to help. And a desire to give blessing to those who work for the denomination. … Many people said ‘be bold, look at the issues and be bold.’”

Bonner listed other concerns including the political involvement by the church — with over 25 percent of the responses being advocacy concerns and an equal number indicating the church is not progressive or active enough in political issues, or that the church was too political. Many responses were concerned about the current structure and purposes of restructuring the church. Small churches voiced concerns that the denomination should provide help to those that “are having difficulty maintaining their congregations,” including the cost of full-time pastoral care.

His report was based on asking each agency three questions:

Recommendations and “low-hanging fruit” from these discussions indicated a number of actions including agencies developing a formal plan for periodic outreach to mid councils and presbyteries to discern their needs and ways the agencies can help.

Other topics for recommendation included the management, cost and distribution of shared or common services such as legal, communications, human resources, property and information technology, the consolidation of publishing services, the process for audit of the Board of Pensions, including an assessment of the effectiveness of the current a la carte benefits program.

“These are things to explore with each of the agencies,” Hostetter said. “Rather than being a directive from us to the agencies, pursuant to our power, it would be more constructive to the process if we note them as opportunities to explore how to enhance their service offerings.”

The group then turned its attention to the review of the Presbyterian Mission Agency (PMA) and the recent proposal from the PMA Board’s Governance Task Force to restructure the board.

Returning to issues raised in earlier meetings of the Way Forward Commission, member Eliana Maxim said, “I have a hesitancy about moving forward until we have a handle on the culture and purpose [of the PMA.]”

“We need to think more broadly about our conversation with the PMA,” Hostetter advised. “About values, about issues raised by earlier reviews. Not that the quick fixes won’t come up, but they shouldn’t lead the conversation.” 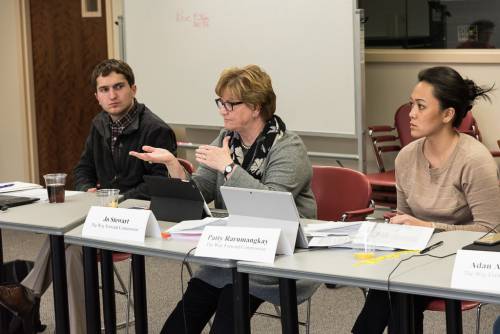 Calling attention to the “big issues” of identity, culture and governance, member Eileen Lindner encouraged more investigation into the use and allocation of shared or common services administered by the PMA.

“If you ask about shared services, we got varied answers of what they are and how they should work,” said commission member Mathew Eardley.

“Every single person we spoke to gave us a different view of what was included,” agreed Maxim. “We went away more confused than when we started. We should be asking what the optimal configuration of shared services is going forward.”

At its last conference call, the Way Forward Commission received and discussed the proposal by the Governance Task Force of the PMA Board. This discussion was informed by a letter issued by advocacy committees urging the board to reconsider representation of their groups on the board. These groups are set to begin discussions soon.

“The question is whether or not we can have a representative model or if we need direct representation from each group,” said commission member Jo Stewart, a former member of the PMAB and co-author of the Governance Task Force report.

For Maxim, the matter of representation from racial-ethnic advocacy groups was tied to the purpose of the PMA. “It’s being clear about who their constituency is and what are you charged with doing,” she said. “That’ll inform the representation needed.”

“The timing of this proposal and us working with them is open,” said Hostetter. “There are multiple routes for this proposal to move forward — either via the General Assembly, or us doing something earlier. The earliest we could do something would be the fall, or the end of the year, which is just six months before GA[223].”

Following a detailed review of the work asked of the Way Forward Commission in the General Assembly mandate, Bonner said, “We need to break down the requests from GA and address how we achieved or addressed each of the tasks. … Have we opined on what it is we think is wrong that needs to be fixed?”

Eardley agreed, “We need to step back and say we’ve been given the gift of a Kairos moment to discern what it means to be the church for the 21st century. How are we being, and meeting the needs, of the emergent church?”

Affirming the work of the Six Agency Review Committee, Hostetter said he sees their work as distinct, but informative to, the Way Forward Commission. “[These are] tracks that relate to each other,” he said. “One relates to the structure as it is. The other is visioning the structure of what we want for the future.”

Asked if that meant the Way Forward Commission had the power to merge agencies, staff advisor Tom Hay said, “Technically no, but it could be a recommendation through the General Assembly.”

Committee members spent the rest of their first full day together revising their “Affirmation of Approach” document and setting a workgroup structure for next tasks.

Calling attention to the urgency felt by the group as other committees begin their work, Bonner said, “Time is flying by faster than I can imagine. … Some of these things seem easy, and we need to get at them.”

To that end, the commission formed three new groups to hone in on their objectives.

Noting the anxiety felt by some in the six agencies of the PC(USA), Hostetter said the Way Forward Commission was committed to a different approach. “[We need to] move from a directive model, to encouraging conversations between the agencies,” he said. “We should be cautious about implementing or mandating something that the PMA objects to.”

The Way Forward Commission will conclude its meeting at Columbia Theological Seminary at noon on Tuesday, March 7.

The Way Forward Commission is one of three bodies established by the 222nd General Assembly (2016) last June in Portland, Oregon. The other two are the 2020 Vision Committee and the All Agency Review Committee. Leadership of all three bodies has jointly committed to open communication and close collaboration of activity as they move through their individual initiatives.