Participants in the PCUSA Walk for a Fossil Free World have enjoyed cooperative weather for the first half of the trip. Photo by Debbie Gibson

LOUISVILLE – Despite some heat, a few blisters and at least one case of poison ivy, participants in the PC(USA) Walk for a Fossil Free World are encouraged as they enter the final days of their trek to St. Louis. The walk, a joint project of the Presbyterian Peace Fellowship and Fossil Free PCUSA, began June 1 at the Presbyterian Center in Louisville. It ends June 16 at the start of the 223rd General Assembly. 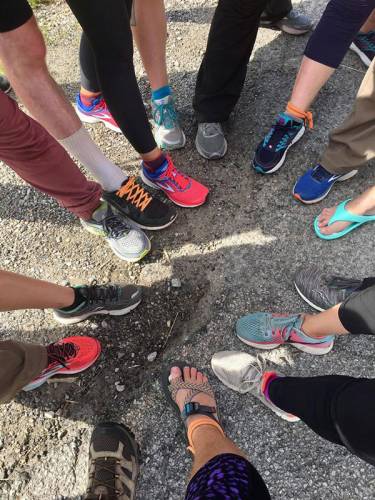 “It’s been really good. We reached the 100-mile mark last Friday and we’re feeling it in our bodies, but we are also feeling it in our hearts,” said the Rev. Abby Mohaupt, moderator of Fossil Free PCUSA. “We have stayed and interacted with many Presbyterian churches, and have experienced a time of overwhelming hospitality and welcome.”

The group hits the pavement for 10 to 17 miles each day and ends with dinner, worship and a teach-in at local churches along the route. The entire journey to St. Louis is 260 miles.

“We haven’t run into weather issues, but this week may bring more rain. We’ve had some intense heat and humidity, which has caused some blisters, but we’re doing OK,” said the Rev. Emily Brewer, executive director of Presbyterian Peace Fellowship. “One of the women at a host church is a physical therapist and specializes in wound care. She really doctored people up and taught us how to better care for ourselves and that was an unexpected blessing.”

The issue of total divestment from fossil fuels will be a major topic of discussion at General Assembly. As many as 40 presbyteries have gone on record in support of an overture calling for divestment from the fossil fuel industry. The Committee on Mission Responsibility Through Investment (MRTI) has argued that the best course of action is to continue corporate engagement. Committee members say divestment would eliminate the church’s voice in corporate boardrooms.

Both Mohaupt and Brewer say they’ve received positive feedback on divestment from the churches and communities they’ve visited.

“It’s been interesting because some of the churches that have been hesitant to meet with us have been reliant on coal. We talked with them about our movement away from fossil fuels and that’s been a fun conversation to have,” said Mohaupt. “Most churches are doing a lot of environmental work themselves and they’re sharing their work with us.” 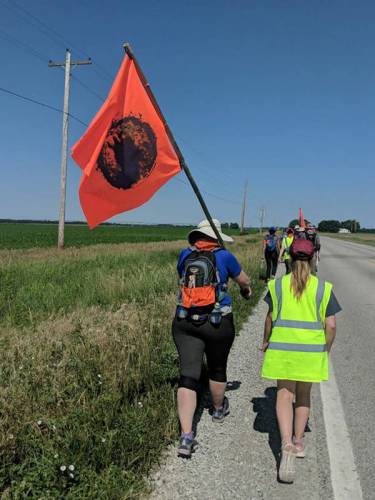 Walkers are mostly traveling the back roads to St. Louis. Photo by Abby Mohaupt

The number of walkers ranges from 13 to 25 at any given time. The route has taken mostly back roads across Indiana and Illinois with a few stretches on highways or sidewalks in small towns.

“We’ve had a few conversations with the public as we are walking. Some people have driven by us and then circled back around and asked what we were doing. That’s been a fun time for conversation,” said Brewer. “Last Thursday, we were preparing to walk through a state park and some women drove by, talked with us about the walk and had their pictures made with us. We’ve had a lot of people stop and make pictures, encouraging us and encouraged by what we’re doing. Every time we have one of those interactions, it lifts our spirits a little bit.”

Mohaupt says the interactions with people on the ground show the churches’ willingness to make sure divestment happens.

“It shows there is a grassroots movement and desire to divest,” she said. “We’ve had teach-ins every night and some have been led by people from around the world including pastors, mission co-workers from Peru and investment managers who say it is time to divest.”

Brewer says the people they encounter are also impressed by the wide range in ages of the participants.

“We are a multi-generational group of walkers. A few kids from one of the host churches joined us for the walk for a while. The age range for participants that day was 11 to early 70s,” she said. “One of the things all of the churches have remarked on is how much energy they feel from young people and that it is a multi-generational movement. It’s very encouraging.”