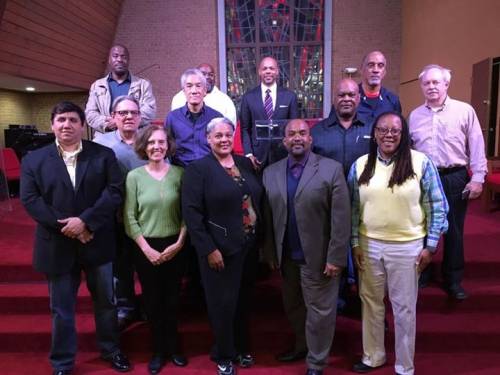 ST. LOUIS – The Urban Ministry Network of the Presbyterian Church (U.S.A.) met October 24-26 to consult with several local pastors and to plan ways to expand the urban ministry network in advance of both Big Tent (July 2017) and the General Assembly (June 2018). The network was created in response to a report to the 2014 General Assembly, “The Gospel from Detroit,” which called for renewing the church’s “urban vision.” The best way to do this, said the Rev. Phil Tom, who convened the group, was to listen to pastors dealing with the toughest urban realities in communities under pressure. One core goal of the group is to be a support community itself for pastors serving in cities and inner-ring suburbs.

There were several focal points to the urban roundtable meeting:

The panel discussion at Third Presbyterian Church highlighted the turnaround efforts by all three pastors in very different settings in St. Louis. The Rev. Portis, who co-chairs the Presbytery of Giddings-Lovejoy’s Committee on Local Arrangements, discussed his strategy to change the culture of his congregation to serve its community. The Rev. Crumpton discussed the challenges of change after a long predecessor pastorate. The Rev. Cooper described outreach efforts in a very diverse and mobile community that includes many immigrants. Though all three pastors and churches responded to the public tragedy in the St. Louis suburb of Ferguson in 2014, with the shooting of Michael Brown, they focused on their larger and longer term efforts to live out the Gospel in their parts of St. Louis.

The Rev. Kevin Johnson of Detroit, a member of the Advisory Committee on Social Witness Policy originally responsible for The Gospel of Detroit report, reaffirmed the hope that the churches in each city where the General Assembly meets can contribute to an ongoing narrative about reversing violence with a Gospel message of personal and social healing. He and other pastors in Detroit walk the streets of their neighborhoods to build relationships and lessen gun violence.

The Rev. Adan Mairena of Philadelphia noted that his presbytery is working towards approving an urban network there, and he discussed strategies for gaining support for new ministries across a large presbytery that includes wealthy suburbs as well as central city areas.

The Rev. Phil Tom noted three other items of interest to urban ministers:

Other network members came from Chicago, Kansas City, Baltimore and New York City, along with three pastors now on staff in Louisville. Ruth Farrell, Coordinator of the Hunger Program—which has helped support urban ministries, was also present representing the ongoing commitment of the overall Compassion, Peace, and Justice ministries.