Unity in our Community Time Bank in Detroit, MI is a project funded with a grant for $12,701 by the Presbyterian Committee on the Self-Development of People (SDOP), a ministry of the Presbyterian Church (U.S.A.). SDOP enters into partnerships with groups of economically poor people who want to change their lives and their communities.

This project is an effort to formalize the exchange of time and talents to meet one another’s needs without exchanging money. 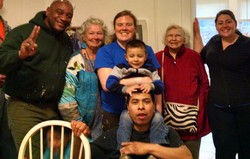 Many community residents do not have access to services because of a lack of money. Fortunately talents exist in the community and those who need them can be matched with those with the specific need. The residents can meet their own needs by organizing, tracking the system and learning best practices.

The project is designed to allow members to meet their economic needs by saving money through receiving services via exchange. It also allows members access to services they would not receive due to cost. The savings and access increase their standard of living. It is a self-perpetuating system that allows unlimited opportunities and savings over time. The group members and volunteers are contributing countless in-kind hours to support the project. The group receives office space at a reduced cost, and the entire effort started with only $99 in donations.

Hundreds have taken advantage of the TimeBank. Some of these exchanges have been person-to-person exchanges and group work days, such as having a doorbell fixed, getting a bike repaired, learning how to print photos, yard work, home repair and receiving a hand sewn item.

Group members not only receive services but also can learn how to do it themselves. Several classes have been taught by members. TimeBank members have learned skills including cheese making, bicycle repair, basic vegetable gardening, and more.

For the future, group members have resolved to have a steady stream of classes, social events, and group work days. They are creating a plan to recruit more active members for the governing board in order to distribute the work more evenly.

On May 9, 2015, we had a group work day at founding member and Kitchen Cabinet member Jane Slaughter’s house. Jane has recently retired and wanted to do a serious makeover of her back yard. We weeded a large area, added compost to the space, and planted ground cover. We also removed a weedy overgrown ground cover from a large area and laid down compost and planted grass seed. It was a lovely warm day and while we worked we enjoyed snacks and lemonade. Several people contributed over the course of the day, including one new TimeBank member who joined because he is a longtime friend and neighbor of Jane’s.

Amanda Holiday is a TimeBank member who has earned many hours hosting a monthly game night at her house.  She and her husband bought two houses (one to live in, one to rent out) and the vacant lot between them in February. They used some of their TimeBank hours to borrow a large truck and have another TimeBank member help them move.  In April, the TimeBank organized a group work day to help the Holidays do a clean-up in their yard and in the neighborhood.  “We raked, took down an old chain link fence, and picked up trash on their property,” Alice Bagley said. “Then we went to the abandoned houses next door and across the street and raked and picked up trash in these yards as well. Afterwards, we all had a potluck dinner together, and other members who were not able to participate in the work day joined us as well.”

Later that same month, the TimeBank had a group work day and open house at long time member and Kitchen Cabinet member Jennie Weakley’s house. During some local construction, trucks were routed down a nearby street, sending a lot of dirt and grit into the air and coating her windows. “We purchased supplies and equipment to wash the outside of those windows,” Alice Bagley said. “We also did some spring clean-up work in the garden including weeding and cutting up a few branches.  A TimeBank member and her young son helped by cleaning the inside windows.  We were also able to repair a screen door for her.”  Before the event, Jennie sent invitations to her neighbors to turn the work day into an open house that included a barbecue and other refreshments. A few neighbors who had never heard of the TimeBank showed up and we were able to sign one woman up on the spot.  It was a beautiful day and as the adults worked several kids played in the yard. A cameraman for the local Fox television station came out to get some footage for a story on the TimeBank that aired several weeks later.

“With the help Presbyterian Committee on the Self-Development of People (SDOP), our Southwest Detroit TimeBank is thriving like never before,” Jane Slaughter said. “Having the money to hire a part-time staffer enables us to do so much more. For me personally, it was such a gift when the TimeBank made my yard a group project–I never could have done all that work by myself.”

Support for the whole community

In late 2015, the family of two youth members of the TimeBank was recently the victim of a string of arson in our community. Arsonists burned their garage and damage spread to the house. The family does not have homeowners insurance but is still determined to rebuild and keep their home. The TimeBank has been able to rally some help for them in a few ways. Early on, a TimeBank member was able to use Bridging Communities Inc.’s pickup truck to help them pick up discounted building materials. The TimeBank also gave the family a helmet and other safety equipment purchased with a grant from SDOP.

After the family was threatened with a blight ticket for not having cleaned up all of the debris left from the fire, several TimeBank members decided to help. The volunteers hauled away debris. Another TimeBank member was able to talk to a city worker to arrange a special bulk trash pickup if the Ali family was able to move the rest of the debris to the curb. The TimeBank organized a work day to move and stack the debris by the road. With six TimeBank members and two Bridging Communities staff members helping, the group moved everything in less than a couple hours. SDOP funds helped them purchase supplies for the work day, including dust masks.

“So many people rallied to show up on a weekday morning a week before Christmas that we finished almost an hour earlier than we had planned,” Alice Bagley said.