‘The God of mission has a church in the world’ 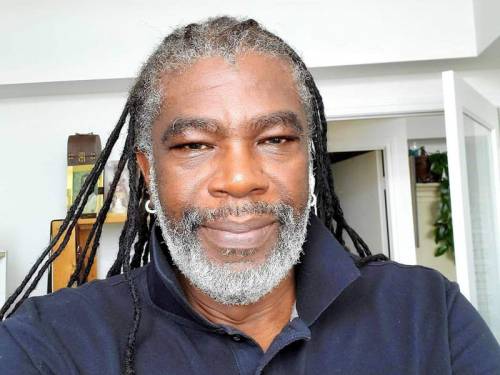 The Rev. Michael Blair is the new general secretary of the United Church of Canada. Photo provided

LOUISVILLE — On Nov. 1, the Rev. Michael Blair will assume the role of general secretary of the United Church of Canada (UCC), a PC(USA) ecumenical partner. Despite an increasingly busy schedule, he took time to meet with Presbyterian World Mission’s regional liaisons from across the world by Zoom last week to talk about the UCC’s new vision of mission, as World Mission reimagines its work in light of new contextual realities.

Sara Lisherness, interim director of World Mission, said she thought the UCC’s journey was an important one for World Mission to hear.

“Rev. Michael Blair is an outstanding ecumenical leader, highly respected across the world,” she said. “He brings both a global and North American worldview to his understanding of engagement with the global church that is undergirded by his commitment to building a just, equitable and inclusive community of faith.”

Blair told the group that the UCC had to completely change the way it looked at mission by changing the way it thinks about mission. “It’s not that the church of God has a mission in the world, but that the God of mission has a church in the world,” he said.

One of the first steps was creating a document called “Mending the World,” completed in 1997. Blair said it was a way for the church to think about its ecumenical and interfaith work, centering on how “God is creatively and redemptively at work in the religious life of all humanity.”

A significant part of that shift, he said, was around seeking justice. 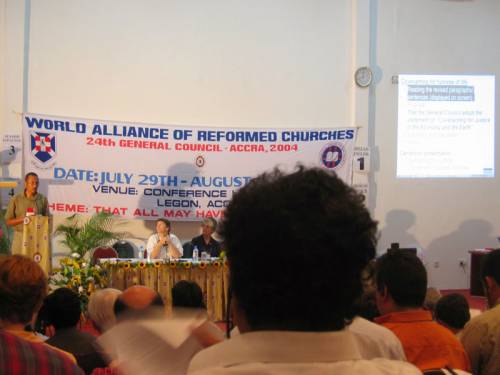 This the World Council of Reformed Churches meeting in Africa during which the Accra Confession was created. Philip Woods

“This became a critical point for us in terms of thinking about our theological framework. The other piece was the Accra Confession, which led us to a number of significant pieces of work. One was a piece on partnership in the midst of empire. The alternative narrative of being in the world became a critical part of our work to decolonize our practices,” he said.

The UCC worked through the National Council of Churches, as well as individual denominations with which they have historical ties — Presbyterians, Congregationalists and Methodists. They did a lot of work around the UCC’s interfaith and civil commitment as a denomination. 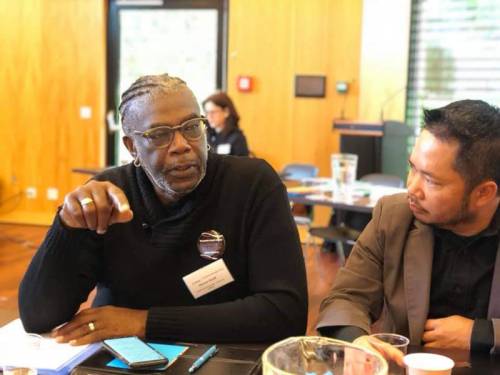 The Rev. Michael Blair speaks with colleagues at a recent event. Photo provided

Committing to South to South sharing has also become a hallmark of mission in the UCC. Recently they have been gathering and connecting partners from various places around the world, then “they step out of the way.”

The UCC brought together partners from the Philippines and Zambia to talk about what they are learning in their context about how they could support one another. The partners planned the agenda and led the discussions. Blair said a number of exciting initiatives came out of that event, most of which the UCC is not funding. The partners are finding ways to fund projects themselves.

“We recognize that we have some work to do around decolonization, but we also know that our partners must have those conversations, too. We ask, what does partnership look like when there is no money on the table? In some ways we’ve created a level of dependence so that if they wanted something, they looked to us for the resources and they don’t think through what needs to happen in their own context.”

The UCC has also developed new principles of partnership to guide its work to move into a more mutual place with its partners.

“We use the language of partnership, but there is no vulnerability in that partnership,” he said. “We don’t talk to our partners about the struggles we face in our own context because we still perceive ourselves as the knights in shining armor. We can’t move into a perspective of true partnership if we are not prepared to become vulnerable and how we can exercise some humility in that vulnerability.” 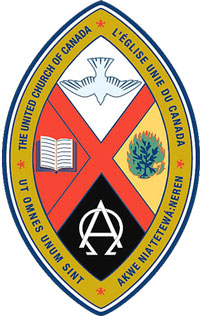 The crest of the United Church of Canada

The UCC spent more than two years in consultation with partners working to identify new principles and partnership and continues to use them to help focus their work. Those include right relations, eco-justice, resistance, interfaith, the combination of charity and justice and living with the complexities of relationships where resources are shared.

They also developed a partnership council, which has six members who serve for three years. Five represent global partnerships and one represents community partners. The council is meant to be an advisory group but also an accountability group, keeping the UCC accountable to its commitments and to its work in the world.

The UCC also has a mutual recognition of ministry agreement with two partners, the Presbyterian Church in the Republic of Korea and the United Church of Christ in the Philippines, that allows ministers from those countries to serve with the UCC without going through an admissions process.

Blair said he also strongly feels that it is important to decolonize our imagination.

He told the group there also needs to be courageous conversations about power and how power plays out in relationships. He said the church needs to carefully examine what power looks like and how we exercise that power.

“If we are going to function differently in the world, among ourselves and with our partners, we need to have some conversations about power and money,” he said. “With money comes power and our partners understand that. Suddenly they are telling me what they think I want to hear because I have the resources. Those of us engaged in mission around the world haven’t had the conversation about what it means to be people with resources.”

Blair said he hopes the conversation will nudge the Church toward new approaches to partnership.

“It was a very engaging conversation. Michael brings a unique perspective drawing on his Jamaican roots and experience as executive minister with the United Church of Canada’s Church in Mission team as they seek to reshape global and ecumenical partnerships to achieve the equity and mutuality we are called to as partners together in God’s global mission,” said Philip Wood, World Mission’s associate director for strategy, program and recruitment.