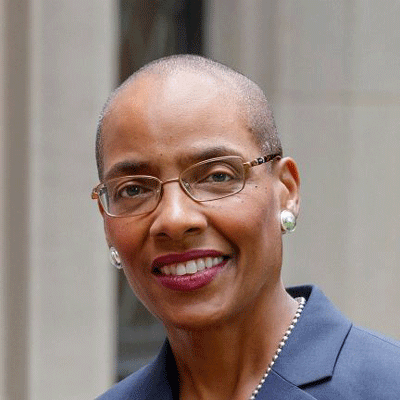 LOUISVILLE — How do we really know God cares when Black people are still getting killed? How long do we have to wait for God’s justice?

Hearing her son ask those questions and seeing Black Lives Matter protests erupt nationwide after George Floyd’s death in 2020 led theologian the Very Rev. Dr. Kelly Brown Douglas to write “Resurrection Hope: A Future Where Black Lives Matter.” On Friday she was named winner of the 2023 Grawemeyer Award in Religion for the book’s ideas.

Douglas, dean of Union Theological Seminary’s Episcopal Divinity School in New York City and a canon theologian at Washington Cathedral, is one of the first Black female Episcopal priests in the United States and the first Black person to head an Episcopal Church-affiliated educational institution.

In “Resurrection Hope,” she shows how a “white way of knowing” came to dominate America through an anti-Black narrative tracing back to the Greek philosopher Aristotle. She also cites examples of how the bias persists today, from the refusal to dismantle Confederate monuments to attempts to discredit The 1619 Project, an effort to reframe U.S. history starting from the year the first enslaved Africans arrived in Virginia.

While recognizing the prolonged suffering of Black people raises deep questions about the credibility of Christianity, she argues that faith, not despair, is the best hope for assuring Black lives are valued.

“Douglas takes us on a captivating, painful journey with personal and erudite reflections on America’s corrupted soul,” said Dr. Tyler Mayfield, religion award director. “Her insights are lucid and disturbing. Her remedies are bold and constructive. May we find the courage to walk into the future she envisions for us all.”

Douglas has been a faculty member at Edward Waters College, Howard University and Goucher College. She has written five books, including “Sexuality and the Black Church” in which she addresses homophobia from a womanist perspective.

The University of Louisville and Louisville Presbyterian Theological Seminary jointly give the religion prize. Recipients of next year’s Grawemeyer Awards were named this week pending formal approval by university and seminary trustees. The $100,000 prizes also honor seminal ideas in music, world order, psychology and education. Winners will visit Louisville in the spring to accept their awards and give free talks on their winning ideas.