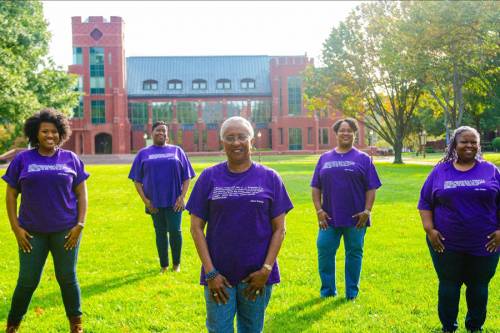 Staff and students at the Katie Geneva Cannon Center for Womanist Leadership are pictured on the Union Presbyterian Seminary quadrangle. (Contributed photo)

LOUISVILLE — Union Presbyterian Seminary‘s board of trustees has approved the creation of a $1 million endowment fund to recognize and repent the resourcing provided to the seminary through the labor of enslaved persons.

The fund will use proceeds from the development of seminary property known as the Westwood Tract to support the ministry of the seminary’s Katie Geneva Cannon Center for Womanist Leadership (KGCCWL). The center convenes Black women around common issues for wisdom sharing, networking, problem-solving, and mobilization.

“America was built on the backs of the enslaved and disenfranchised, including Black, brown, and indigenous peoples,” said the Rev. Melanie C. Jones, the center’s director. “The sinful history of chattel slavery in this nation and the Church’s complicity demand that the path to social transformation requires repentance, restoration, and reparation. Union Presbyterian Seminary bears witness to this tragic past as a theological institution in the seat of the Confederacy and is morally bound to repair the breach.”

With the formation of the endowment to the center named in honor of the first ordained Black woman in the United Presbyterian Church, the Rev. Dr. Katie Geneva Cannon, Jones said Union Presbyterian Seminary is demonstrating a commitment in word and deed to developing womanist leaders for the Church in the world.

“In making this action, the board acknowledged that the seminary has benefited demonstrably in its resourcing from gifts of finance and land that were directly tied to the enslaved work of African American women and men,” President Brian K. Blount said. “Philanthropist Lewis Ginter, who gave the acreage upon which the seminary quadrangle sits, was also a Confederate soldier who fought to preserve an identity and economy built on slavery. His wealth, derived from such an economic system, allowed him to gift the seminary, thus bringing the seminary into relationship with not just his resources but the manner in which he built those resources.”

The initiative also recognizes the challenging history of the Westwood Tract, which was formerly owned by Hunter Holmes McGuire, doctor to Major Ginter and Confederate General Stonewall Jackson.

“It seems appropriate that resources gained from the sale of land once owned by Dr. McGuire and gifted to the seminary might resource the work of a center dedicated to a proposition that Dr. McGuire fought against: that all women and men are created equal,” Blount said. “Through its particular focus on African American women, and indeed all women of color, the Center for Womanist Leadership represents a part of the seminary’s dedication to a future that, while lamenting some of the darkest moments of the past, simultaneously aspires to a brighter future.”