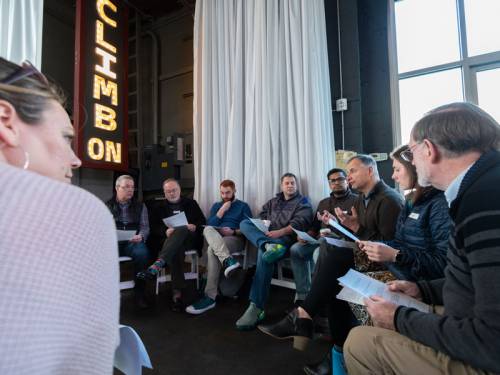 The Rev. James B. Notkin, co-pastor at Union Church in Seattle and third from the right, speaks to a small group at the church. (Photo by Gregg Brekke)

Stick around for a few days at 415 Westlake Avenue N. and you’ll see he’s right.

On Sunday mornings, the building is a worship and fellowship space for Union Church, a Presbyterian Church (U.S.A.) congregation. Monday through Friday, it functions as a coffee and chocolate shop called Kakao. The large, open space dedicated to worship on Sunday mornings is an event space at other times and is named for its address, 415 Westlake.

Union Church hosts a Sunday worship experience that’s a remix of traditional church activities. The first and third Sundays are dedicated to traditional worship, the second Sunday is designed as a time for deep discussion in small groups and the fourth Sunday is reserved for community service.

The overarching goal of Union Church and its associated businesses is to be a blessing to Seattle, and to connect members of its congregation to the larger city so they can do the same. “The community of Union Church supports the work here because of the connections that it fosters, and because of the ways it addresses the needs of this community,” Lumsden says. “That’s what makes it special, and something we could all learn from as a Church.”

Seattle Presbytery and University Presbyterian Church in Seattle have both provided funding and other support to help Union Church get established. The Presbyterian Foundation has consulted with Seattle Presbytery on investments and spending strategies. “We love the opportunity to partner with church leaders to envision how God is calling them in new and creative ways to be the church and do ministry,” says Tom Taylor, President and CEO of the Presbyterian Foundation. “Union Church provides a beautiful sense of community in South Lake Union that would not exist without this commitment and vision of pastors James B. and Renee Notkin, and we’re so grateful for their dedication to the cause of Christ.”

Rev. James B. and Rev. Renee Notkin were serving on the pastoral staff at University Presbyterian Church in Seattle and felt called to start a new ministry. They were hosting a mid-week worship service that drew in a younger crowd and saw that there were not enough ways for those attending to get involved in the church and the community more deeply. “We were thinking so much about, ‘What does God desire the church to be in the 21st century?’” recalls Renee Notkin. 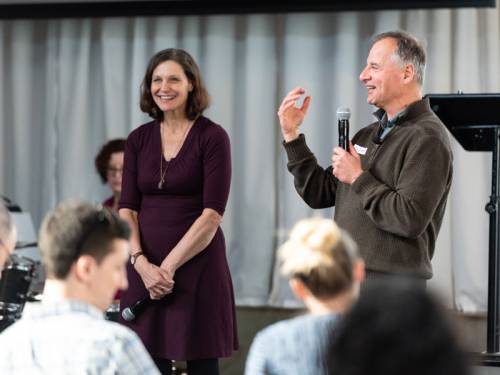 Having served at University Presbyterian Church in Seattle, the Revs. Renee and James B. Notkin heard a call to launch their new ministry about a decade ago. (Photo by Gregg Brekke)

Together with other committed Presbyterians, the Notkins discerned that the right location for this new church venture would be the South Lake Union neighborhood. They established the church a decade ago in what was then an old light industrial portion of the city — and have watched it transform around them as tech giant Amazon moved its headquarters to Seattle and many other tech companies followed.

They are still one of the few churches in the area, and now their event space and coffee shop provide hospitality and shared space in an otherwise impersonal commercial area of Seattle.

While Union Church today is thriving, with growing membership and financial stability, Renee Notkin says the decision to start Union was terrifying and thrilling, all at once. “I felt like I was standing on the edge of a cliff, and we just had to jump,” she says. “We just had to jump because there was no going back. We weren’t sure where we would land. You know where you land? You land in the grace of Jesus.”

Creating a participatory Sunday worship experience was central to the Notkins’ efforts to begin Union Church. Sundays revolve around keeping Jesus’ three greatest teachings, says James B. Notkin. “We discovered that people grow the most when they have these three priorities: remain in me, love one another, and go into the world,” he says.

That desire to build Sunday morning time around these pillars brought the Notkins to a different kind of structure. Services are set for 10 a.m.

It’s that last part that was particularly compelling to Dee Curle. She came to the congregation to fill in as a drummer in the band and decided to stay. “It’s this community that wants to come together and be there for the larger community of Seattle,” Curle says. “The church is always asking, ‘What can we do? How can we help? How can we help one another?’ I wanted to be a part of that.’”

Robyn Davis Sekula is Vice President of Communication and Marketing for the Presbyterian Foundation. You can reach her at (502) 569-5101 or robyn.sekula@presbyterianfoundation.org.