Byrdsong and Oglesby inspired to make change in their community 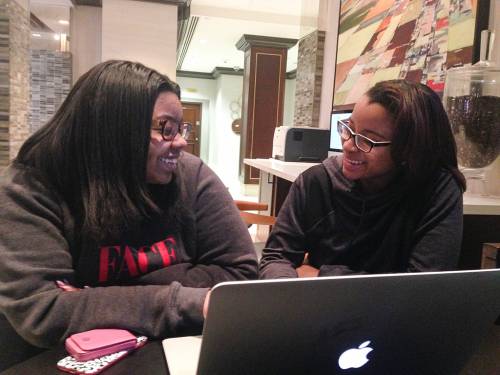 NEW YORK – Troy Byrdsong and Alison Oglesby are two young women with big dreams and big hearts. The freshman and junior attend Wayne State University and are attending the United Nations 61st Commission on the Status of Women (CSW) as a part of the 12-person delegation of the Racial Ethnic and Women’s Ministries of the Presbyterian Mission Agency.

Each year Women’s Leadership Development and Young Women’s Ministries provides scholarships for young Presbyterian women from around the world to attend the CSW—the global policy body of the United Nations Economic and Social Council dedicated to gender equality and the empowerment of women.

While attending the CSW the two young women discussed the challenges facing youth in Detroit and how they would like to see and be a part of the change in their communities. They are excited to take information learned at this year’s CSW back to Detroit and help impact the changes they’d like to see.

“The panel discussions provide an opportunity to hear first hand information on many of those issues [facing women],” said Oglesby. “This is information I can take back to my church and my caucus on ways we can make a difference. In my high school there were many girls from countries like Bangladesh where prostitution is legal. Here we learned how young girls are tricked into prostitution and the sex trade. Information that helps young girls avoid these traps will benefit any community.”

“The CSW has opened my mind,” she continued. “I am so excited to see all these women from different countries. After hearing all of the information it has challenged me to think about [how] I can make a change.”

Byrdsong agreed. “It has encouraged me to think of ways I can make things better in my city, the African American community of Detroit, my church and the Presbytery,” she said. “I live in a predominately Black community and I went to a predominately Black high school. However, my community is not a high crime community, it’s a good community. It does not suffer from the issues that they focus on in the news that appears to impact every African American community in Detroit. I was not aware of many of the issues talked about here at the CSW. Many of these topics I’ve seen on TV or you’ve heard about them on the news. But I’ve never met anyone who has been a victim of sex trafficking or human slavery.”

Oglesby pointed out that while it’s great to see so many women doing such great work here at the CSW it should be the norm rather than the exception. “Seeing women in higher position in the presbytery or in the church should be a norm, not a surprise or considered a huge accomplishment,” she said.

Byrdsong and Oglesby agreed their time at the CSW was a great experience but would like to have seen a lot more young people at the event and expressed a need for more African Americans from presbyteries and congregations to attend the CSW.