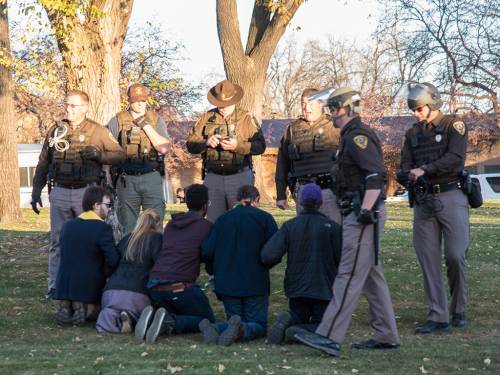 LOUISVILLE – Following an interfaith solidarity gathering of more than 500 clergy and lay people at the Oceti Sakowin camp on the northern border of the Standing Rock Sioux Nation near Cannon Ball, North Dakota last Thursday, a group of approximately 70 faith leaders and “water protector” activists traveled to Bismarck to stage a sit in at the Capitol building’s judicial wing.

Capitol police arrested 14 protestors inside, closed the wing and directed the others out of the building at 4:30 pm. The protest spilled outside the capitol, with the group singing hymns, chanting and marching together before being redirected by capitol police away from the governor’s mansion. They arrived across the street from Governor Dalrymple’s home and reestablished the protest on the sidewalk.

Continuing in song and prayer, and attempts to contact the governor who had arrived at his residence, protestors held a line on the sidewalk as police called in reinforcements. More than 50 riot police arrived and were deployed on the governor’s lawn as capitol police negotiated with those gathered across the street.

A group of five protestors—including Rick Ufford-Chase, Moderator of the 216th PC(USA) General Assembly (2004) and a member of the Community of Living Traditions at Stony Point Center; the Rev. Alison Harrington of Southside Presbyterian Church in Tucson, Arizona; and three others—joined arms and crossed the street, kneeling for arrest on the governor’s lawn.

Shortly after these five were detained, police grabbed a young Native American man— Eric Poemoceah from Lawton, Oklahoma—from the group of protestors and dragged him across the street. Two of the original group—Zebulon Armstrong-Green and Anthony Grimes—declined arrest and were allowed to return to the protest. Ufford-Chase, Harrington and Tithe Barry chanted “we stand with Standing Rock” before being transported off site by police.

Poemoceah remained in detention in view of protestors and his release was leveraged by police as an incentive for demonstrators to disburse. The Rev. Mariama White-Hammond from Bethel African Methodist Episcopal Church in Boston successfully negotiated Poemoceah’s release and the crowd returned to their vehicles by 6:00 pm.

The first 14 protestors, Ufford-Chase and Harrington were charged with criminal trespassing and disturbing the peace. Barry was released without charges. Ufford-Chase met bail and was released Friday afternoon. Harrington refused bail and awaits an arraignment in Cass County jail in Fargo, 200 miles from Bismarck.

In a statement on its Facebook page, the Synod of the Northeast, said the Presbyterian Peace Fellowship would provide support to protestors. Thirteen members of the Synod made the 35-hour journey from Stony Point Conference Center to Standing Rock for the solidarity gathering.

“We call on all people to pray for the Standing Rock community and for the resistance to the Black Snake of the Dakota Access Pipeline that harms the gift of our Creation,” the November 4 statement said. “We stand against the intimidation and arrest of our leaders. The only reason they were arrested is because they are standing up nonviolently for our Gospel values of justice and peace for all of creation for standing with our indigenous sisters and brothers whose sacred burial sites, way of life and communities are being abused and mistreated in illegal and harm-filled ways.”

The genesis of the action began Wednesday evening at an introduction meeting with the Rev. John Floberg, supervising priest of the Episcopal churches on the North Dakota side of Standing Rock and organizer of the solidarity gathering. Ufford-Chase and others spoke to their desire to explore civil disobedience as a component of the gathering.

“There’s a group of folks who’ve been having a conversation about how we can extend the act of being allies here in this place in the next couple of days,” said Ufford-Chase. “We’re not talking about changing any of the plans that have been laid out. We want to do that in a way that is respectful to Father John and the people of this community who have called us here. And if some of you would like to have a conversation with us and push the issue of arrest, to stand in solidarity with those who have been attacked and arrested over the past few months… to push a little bit on the boundaries of what’s lawful… you’re welcome to join us.”

Floberg, who had initially anticipated 100 clergy to join him for the solidarity event, did not oppose the idea of civil disobedience, but said they were “representing themselves” and not the spirit of the gathering.

“There is a hallowed tradition among Christians and other faith traditions to do civil disobedience,” Floberg said. “This group, on Standing Rock, under our umbrella and going out to that site has vowed not to do civil disobedience. There’s no indication that people who stood here are going to try to hijack this event. They’re welcome to be with us, everyone is welcome to be with us as long as they subscribe to that basic set: prayer, peaceful, non-violent, lawful. That’s what we’re doing. When they go on their own to do something that may involve getting arrested, then they’re representing themselves again. They are not representing this group and they not necessarily representing Standing Rock.”

Ufford-Chase said there was a “significant number” of people who had expressed interest in an act of civil disobedience prior to the gathering and praised Father Floberg for the effort of coordinating the event.

“I was interested in pressing the boundaries and taking this to another level,” said Ufford-Chase who noted he has been arrested “eight or 10 times” in acts of civil disobedience. “In part because I was so outraged by the way people had been treated out in the camp and so it feels to me critically important. The government has effectively shut down the option for civil discourse at the camp by shooting first with tear gas and rubber bullets, and then asking questions or doing arrests… And we thought it was time to take it to the state capitol.”

Activists have gathered near Cannon Ball, North Dakota, since April, hoping to stop the construction of the 1,170-mile pipeline scheduled to move crude oil from the Bakken oil fields in western North Dakota to refinery facilities in Illinois. At dispute are environmental dangers associated with oil spills from the line that is scheduled to be placed under the Missouri River and the desecration of sacred sites.

Following the protest, Floberg  said the action in Bismarck drew media attention away from the gathering at Oceti Sakowin and that an apology was owed for confusion caused by using the same posters and attire as was present earlier in the day. The apology, he said, should be delivered, “Not to the organizers of the call to clergy, but to Standing Rock’s leadership for thinking they know better than the Chairman of the Standing Rock Sioux Tribe. We intend to issue an apology.”

(Editor’s Note: The final paragraph of this article was added after its initial publication to include comments received from John Floberg.)