Apology and support for ongoing struggle offered to tribal leaders 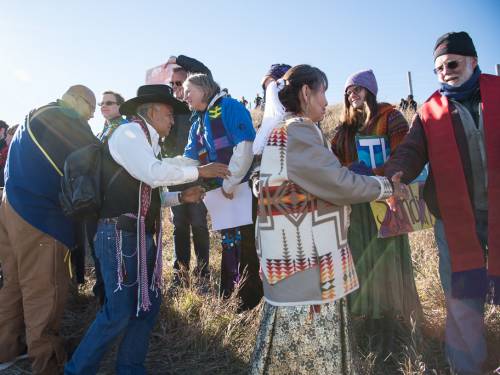 Sara Lisherness, director of Compassion Peace and Justice ministries at the PC(USA), were greeted in the Niobrara Circle ceremony. Also pictured is Rick Ufford-Chase. (Photo by Gregg Brekke)

CANNON BALL, N.D. – More than 20 representatives from the Presbyterian Church (U.S.A.) joined a 500-person-strong gathering of interfaith clergy and lay leaders at the Oceti Sakowin prayer camp yesterday, adding voices of solidarity to self-described “water protectors” at the site and taking part in a ceremony repudiating the Doctrine of Discovery.

Members of the Standing Rock Sioux Nation and supporters have gathered at the site since April, hoping to stop construction of the 1,170-mile pipeline scheduled to move crude oil from the Bakken oil fields in western North Dakota to refinery facilities in Illinois. At dispute are environmental dangers associated with oil spills from the line that is scheduled to be placed under the Missouri River and the desecration of sacred sites. 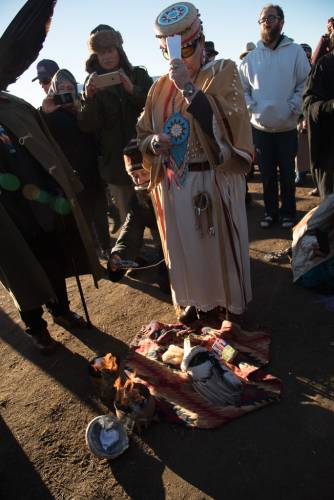 An elder burned copies of the Doctrine of Discovery at a Nov. 3 ceremony where faith leaders denounced the doctrine and apologized for its consequences. (Photo by Gregg Brekke)

The day began at the site of the camp’s sacred fire that is maintained around the clock. Surrounded by open space and several tarp-covered sun and rain shelters, the fire circle is the center of camp life where tribal elders gather to confer with one another, sun dancers greet the day and community announcements are made. It is also where ceremonies take place.

Invited by tribal elders, the Rev. John Floberg, supervising priest of the Episcopal churches on the North Dakota side of Standing Rock, led the gathered clergy encircling the fire in a ceremony of apology and repudiation of the Doctrine of Discovery, the papal edict issued in 1493 that asserted indigenous peoples did not have sovereignty over their land and gave western colonizers the right of dominion.

Leaders from faith groups that officially had repudiated the Doctrine of Discovery, including Sara Lisherness, director of Compassion, Peace and Justice ministries at the PC(USA), joined Floberg at the speakers platform, where they each read a portion of an adapted repudiation statement crafted by the World Council of Churches.

Following the apology, copies of the Doctrine of Discovery—as written in the original Latin—were offered to tribal elders. When Floberg asked if the elders wanted to place the Doctrine of Discovery in the sacred fire, the elders conferred before one spoke out, saying, “This paper, these words, do not belong in a sacred fire.” They chose to burn them, not in the sacred fire, but in the space between faith leaders and tribal elders.

Lisherness described her participation in the ceremony as profound. “I remember looking down at my feet at one point, being very overwhelmed, and recognizing that I was standing on holy ground. And that kept being echoed through the day,” she said. 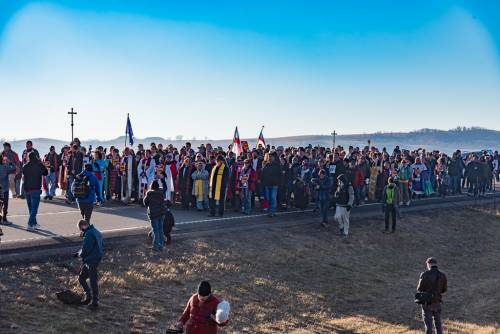 Faith leaders amassed on the road leading to the bridge over the Cannonball River, which has been the site of unrest over the past six months. (Photo by Gregg Brekke)

Clergy then processed north from the camp to the barricaded and well guarded bridge across the Cannonball River that has been the site of several conflicts between law enforcement and Native American activists. The burned-out shell of a car straddles the road, and two torched trucks in the road provide a blockade on the other side of the river. A line of law enforcement vehicles trails on beyond the trucks.

Representatives of faith groups added their voices of solidarity to the struggle for sovereignty over disputed land and water, continuing expressions of remorse for the way religious groups had treated indigenous peoples and promising to listen to and join their voices to the concerns of Native groups.

“It was the Doctrine of the Discovery that took us from our tribal lands to these shores as slaves,” said the Rev. Mariama White-Hammond from Bethel African Methodist Episcopal Church in Boston as a surveillance helicopter hovered overhead. “We are here in solidarity because the sin that was committed against the people of this land is the same sin that brought my ancestors to this shore, the same sin that has some of my ancestors on the bottom of the ocean because they did not make it across.”

The Rev. Paul Sneve, archdeacon in the Episcopal Diocese of South Dakota and a member of the Rosebud Sioux Tribe, then led the clergy in a Niobrara Circle, a ceremony in which a selected person turns to their left and greets each person in the circle. The person to the left of the one who started does likewise until each person has greeted everyone in the circle. With more than 500 participants spread across both sides of the road, extending down into a ditch and up onto a hillside, the ceremony took 90 minutes.

As clergy participated in the Niobrara Circle south of the bridge, Native military veterans gathered on the span in a ceremony of their own, their song spilling out over those who greeted one another.

“It’s powerful that so many people came from so far away to bear witness,” said Lisherness. “The boldness and encounter with the elders, and with the water protectors standing on the bridge having their religious ceremony while we were engaged in ours. The music was beautiful and haunting.”

Referring to the focus on land rights and preservation central to the Standing Rock objection to the pipeline, Lisherness said, “It’s an important time to stand in solidarity with people who understand the beauty and magnificence and fragility of God’s creation. It’s also so important to stand for the human rights and dignity of the [Native] people who have made that connection.”

Rick Ufford-Chase—moderator of the 216th General Assembly (2004), co-director of the Stony Point Conference Center and interfaith officer for the PC(USA)—was moved by the apology ceremony and urged churches to support the people of Standing Rock, to sustain the camp through the winter.

“This long and hard witness could be brought to an end quickly and easily by the governor and the president of the United States,” he said. “In the meantime, we’re going to have to support this financially.” He also urged members of the PC(USA) to contact their state and national representatives to advocate for an end to the construction of the pipeline and for protection of sacred lands.

Ufford-Chase, along with The Rev. Alison Harrington of Southside Presbyterian Church in Tucson, Arizona, and three others, was arrested later in the day in Bismarck during a protest at the governor’s residence near the state capitol. An hour earlier, 14 other faith leaders were arrested after refusing orders to leave a wing of the capitol. At press time the status of their release was unknown.