‘From’ and ‘to’ can be keys to helping hearers along their journey, preaching professor says 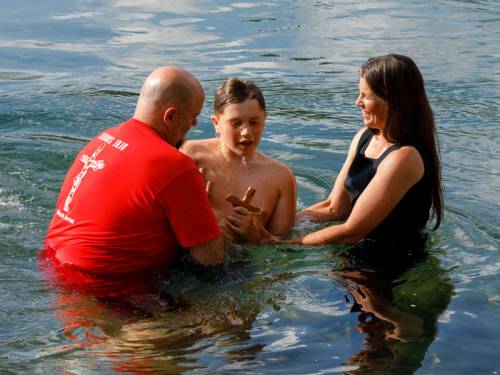 A young skateboarder is baptized in the Flathead River in Montana. (Photo by Bob Paulus)

LOUISVILLE — Sermons that are memorable and have impact often rely on two tiny prepositions: “from” and “to,” the Rev. Dr. Tim Slemmons told a group of about two dozen preachers gathered online last week to participate in a webinar designed to help them improve their preaching.

“Is the sermon casting a vision and taking us somewhere?” Slemmons, Professor of Homiletics and Worship at the University of Dubuque Theological Seminary. “You may not notice how often you use ‘from’ and ‘to’ language.” 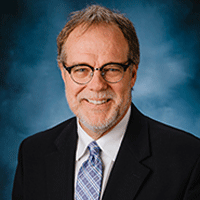 Slemmons was speaking as part of the Synod of the Covenant’s monthly Equipping Preachers series, which is available to preachers inside and outside the boundaries of the synod and is put on by the synod’s interim executive, the Rev. Dr. Chip Hardwick. Learn more about the series here.

Slemmons compared from/to preaching with their cousins both/and, which is preaching that attempts to unify opposites, and either/or, preaching that addresses a costly decision. From/to preaching (metanoia) helps hearers answer these questions: From where or from what condition are we setting out? Toward what or where is God leading us with this Word today?

From/to sermons can take many forms, according to Slemmons:

He said he sees these kinds of sermons as among the most common:

“If I am reading the signs of the times, we are being called to emphasize preaching baptismal aims, clearing away as many obstacles to the font as possible,” Slemmons said, by frequently offering up renewal rites during worship, rites that include foot-washing.

“Divisions in the church and culture are becoming wider,” he said, “and I am concerned about the new fissure of vaccine status.”

Church members and friends are also faced with “rampant loneliness,” Slemmons said, and the nation finds itself engaged in greater civil unrest and climate change concerns as well as trying to define what free speech is, especially via social media.

“It’s clear that those who are pressing to control everything are those who are most anxious and do not know the gospel of Jesus Christ,” Slemmons said. Preachers “are not trying to heighten the anxiety — just name it. Doing so in a 15-minute sermon could be divisive or counterproductive.” 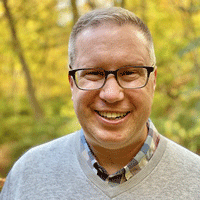 The Rev. Dr. Chip Hardwick is interim executive of the Synod of the Covenant.

The ultimate from/to sermon, Slemmons said, is expressed during the baptismal rite, when candidates are asked, “Do you turn from the ways of sin and renounce evil and its power in the world? Do you turn to Jesus Christ and accept him as your Lord and Savior?”

Rather than “an altar call,” these are “renewal rites, especially as they church regathers” with worshipers remaining masked and observing social distance requirements, Slemmons said. “Baptism offers us a pattern for renewal and recommitment rites,” which comes with many benefits, including:

“Maybe you [preachers] need to get your feet washed in front of the congregation,” Slemmons said, “so they aren’t squeamish about it.” Offer these rites regularly, he urged. Reclaim and keep references to baptism and repentance in the invitation to the Table, Slemmons suggested.

“What if instead of just preaching on Jesus’ baptism in January and moving on, you kept the baptismal lens on from Advent through Easter, and again in Pentecost?” Slemmons said.

He also shared ideas for transformational preaching, including the lament psalms, a series on the Ten Commandments “with robust confession in response to each commandment,” a series on the Lord’s Prayer or the Olivet Discourse (as recorded in Matthew’s gospel here and here).

Slemmons called these suggestions “a way to keep baptismal themes in the foreground this coming year. We have gotten a little lazy about our invitations to the Table, which are becoming casual.”

“The times in which we are living call for a robust theology of baptism coming from the pulpit,” Slemmons said, “and being embodied by the liturgical assembly.”

The Rev. Dr. Jana L. Childers, Professor of Homiletics and Speech Communication at San Francisco Theological Seminary at the University of Redlands, is the next speaker in the Equipping Preachers series. Her talk, entitled “Performing the Word … Online,” is set for 10 a.m. through 11:30 a.m. Eastern Time on Wednesday, Jan. 5, 2022. Learn more and register here.