…be led forth in peace. (Isaiah 55:12). Support to the Peace & Global Witness Offering.
Make A Donation Click Here >
Home › The ties and tithes that bind

New Castle Presbytery honors its past while looking to the future 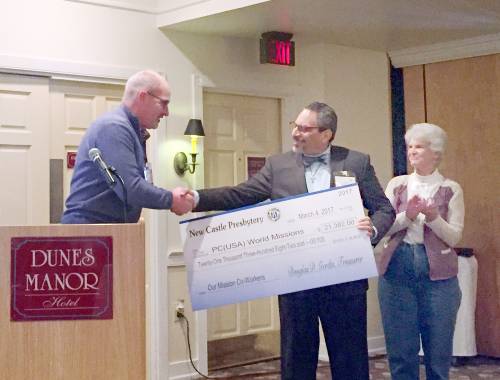 LOUISVILLE – New Castle Presbytery looked to its roots during an especially difficult time of church dismissals. However, by remembering where it came from while looking to the future, the presbytery better understood its calling.

In June 2015, the presbytery took action with respect to settlement funds received from churches dissolved by the presbytery so they could leave the PC(USA). In this time of ending and closure, it found a way to create new ministries give hope to existing ministries in communities along Delaware and Maryland’s eastern shore.

“Tithing a portion of the settlement funds to ministry beyond the bounds of the presbytery was a natural commitment to make,” said Stated Clerk/Interim Mission Coordinator Bob Schminkey. “It is consistent with the missional theme and history of New Castle Presbytery.”

Ten percent of the total amount of the settlement funds was given to the PC(USA) to support Presbyterian mission co-workers. The gift is to be used where the need is greatest, and the funds were to be distributed in three equal payments in 2016, 2017 and 2018.

Tony De La Rosa, interim executive director of the Presbyterian Mission Agency was in attendance at a recent presbytery meeting to receive the second payment from Winnie Wagner, Moderator, and the Rev. Douglas Gerdts, presbytery treasurer.

“In many ways, supporting the church’s mission has changed,” De La Rosa said. “But in most cases, they remain the same. Your prayers strengthen us. Your financial support makes the work of the Presbyterian Mission Agency possible and helps us to extend the love of Christ throughout the world. And we thank you for your abiding generosity and faith in the work we do on your behalf.”

New Castle earmarked the other 90 percent of the funds for new church development within the presbytery, specifically in areas of rapid growth and areas where churches had left or closed.

The congregations of New Castle Presbytery have many ministry connections around the world, including Peru, South Korea, Japan, the Congo, Guatemala, Cameroon, Ghana, South Africa, Malawi and Cuba, and the commitment to sustain the witness of the PC(USA) through the support of mission co-workers is not new to this presbytery. In fact, it is over 300 years old.

Francis Makemie (1658–1708), an Irish clergyman considered to be the founder of Presbyterianism in United States of America, was also the founder of many congregations within New Castle Presbytery that still exist.

“Because a missionary from Ireland came to begin a new ministry here on the Eastern Shore and in Delaware, we exist,” Schminkey said. “Because of these funds, we can continue to carry out Christ’s commission to his disciples to go and make disciples of all nations.” 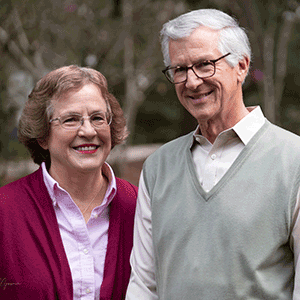 Use this card as you pray for mission co-workers David and Sue Hudson The card includes a photo of them and their ministry.