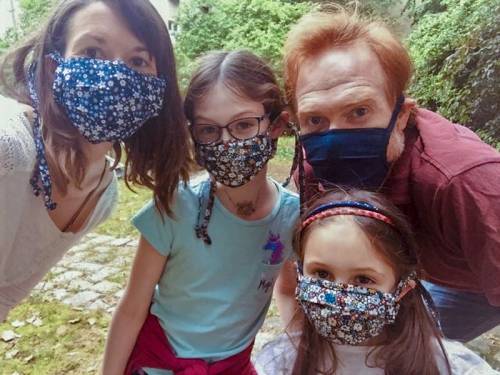 LOUISVILLE — As COVID-19 circles the globe, mission co-workers the Rev. Ryan and Alethia White in Berlin, Germany believe that working together, in our respective corners of the world, can improve protection for human rights everywhere.

The Whites have served with the Iranian Presbyterian Church in Berlin since 2013, working with refugees and seeing firsthand how religious and political organizations can make a difference.

Since the Iranian Revolution of 1979, millions of Persian-speaking people have migrated to the United States, Europe, and other areas of the world. Well over 100,000 Iranians have settled in Germany. The Iranian Presbyterian Church in Berlin, in addition to providing worship opportunities in Farsi, helps Iranian refugees and immigrants begin a new life in Germany. Ryan White serves as the congregation’s pastor. He and Alethia White work with a pastor and social worker of the congregation to offer pastoral care to those who are now making Germany their home. They also collaborate with ecumenical partners to provide training and continuing education opportunities for leaders of the Presbyterian Church in Iran. 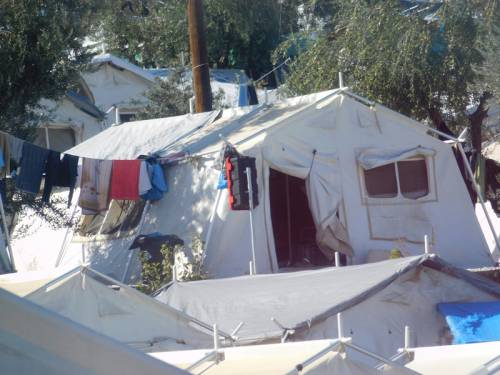 A tent in the Moria Camp in Lesvos, Greece. (Photo by Kathy Melvin)

In October 2019, the Whites visited the Moria refugee camp on the Greek island of Lesvos and witnessed the terrible conditions people are forced to endure there, including overcrowding, fires, riots and violence.

“People continue to arrive seeking shelter and a chance to live life fairly,” Alethia White said. “We ask ourselves, ‘What if it were our family in that situation?’ That simple question helps to do away with the violence notion of ‘us and them.’ There is no ‘them.’ There is only ‘all of us.’”

Around Berlin, she says, homemade signs hang from balconies and windows and messages are spray-painted on almost any available surface. “Free the Camps Now!” and “Leave No One Behind!” and “We Have Enough Space!” are among the spray-painted messages. 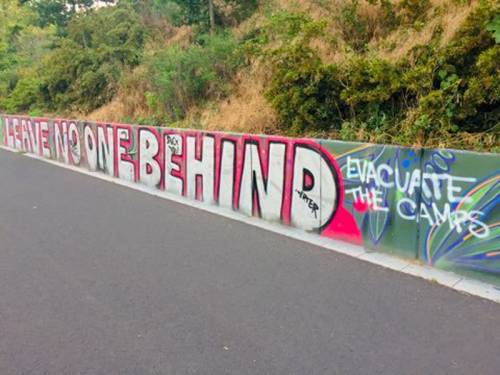 A sign calling for reform at refugee camps. (Photo by Ryan White)

The Black Lives Matter demonstrations occurring worldwide are also vibrant in Berlin, she said. “In light of the movement and the horrendous reception of refugees at various borders across the globe, it is clear that we all need to be engaged in building economic and social systems that support one another,” she said. “We are listening to the voices of the U.S. demonstrations here in Berlin and we are mindful that we need to be more aware of how we promote or demote racial equality in our own family and work life.”

Alethia White participated in two online conferences in July on human rights and the role of the church. The discussions were about refugee protections and how political and religious institutions can make a difference. It was a stark reminder, she said, that human rights are being swept aside everywhere and are in need of much greater protection.

“It was also a reminder that there are similarities between what is happening on the European borders and the U.S. border, and there is great concern that there is not enough regard for the people being mistreated at those borders,” she said. “As parents, we cannot even imagine being separated from our children and then turned back from the border while they are detained. Or being on an inflatable boat in the waters between Turkey and Greece and then being forcibly pushed back by border guards. How can we each help heal the rifts in our global human family?”

“One way is to actively support organizations working to protect refugees. Others are speaking out against racism or offering a smile to a stranger passing on the street,” she said. “Let’s please work together, each in our own corner of the world, to knit each other together rather than tear each other apart.”

In Berlin, the White family and their community have weathered the virus for the last several months and is now able to enjoy a new era of relaxed regulations and limited ability to socialize.

“The current situation here in Berlin is much more relaxed than a few months ago. These systems have been mostly respected, which seems to have helped keep infections relatively low for the time being,” she said. “Our church gatherings are still being conducted online for now, and we continue to be thankful that this medium allows us all to come together to share prayers and be creative in our sense of community together. Churches are allowed to meet in person again, but only with partial capacity indoors and with everyone following current regulations.”

She hopes meeting in person will be an option in the coming months. But the process of online worship has worked well so far and most of the congregation prefers that method, for the moment, for everyone’s safety and protection.

The Whites, who have two young daughters, will soon prepare for their upcoming return to school, which at the moment appears to be a normal schedule. In the meantime, they have enjoyed riding bikes, visiting the parks and finding new and previously undiscovered places in the city.

“We will never take freedom of movement and access to the outdoors for granted again after the last few months,” she said. “Freedom of movement, safety, and expectation of fair treatment? These are all things many have the luxury of taking for granted, while others have to make impossible choices in the hope of attaining such securities.”

If you would like Ryan and Alethia White to appear at your worship service, Bible study or mission committee, you can contact them at Alethia.White@pcusa.org.