Christmas Joy Offering – Supporting our leaders: past, present and future.
Make A Donation Click Here >
Home › The Immersion, a PC(USA) conference on congregational vitality, hears from one of the nation’s foremost biblical scholars

‘We have the power in our hands to make huge changes,’ says Dr. Obery M. Hendricks, Jr. 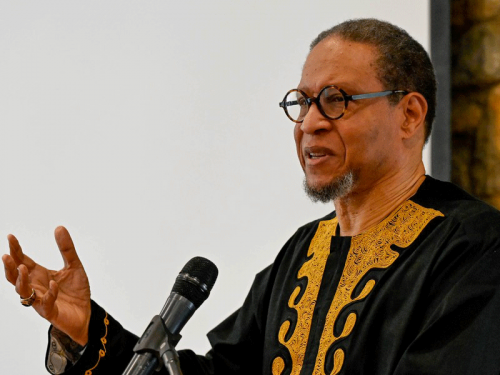 LOUISVILLE — Dr. Obery M. Hendricks, Jr., the final keynoter for The Immersion conference which concluded Thursday, shared his insights on two more of the 7 Marks of Congregational Vitality — Outward Incarnational Focus and Empowering Servant Leadership. The Office of Vital Congregations sponsored the conference, held online and in person at Montreat Conference Center in Montreat, North Carolina.

Hendricks, a lifelong social activist, is a visiting scholar in the Department of Religion at Columbia University and a visiting professor at Union Theological Seminary, both in New York City. He wrote “The Politics of Jesus: Rediscovering the True Revolutionary Nature of Jesus’ Teachings and How They Have Been Corrupted.” The most widely read and perhaps the most influential African American biblical scholar writing today, Hendricks’ most recent book is “Christians Against Christianity: How Right-Wing Evangelicals are Destroying Our Nation and Our Faith.”

During the first of two hour-long addresses Thursday, Hendricks sought to define where faith comes from — ours, Jesus’, and the others’.

“Our faith begins in a liberation event, the Exodus,” he said. “It’s important to keep in mind God did not respond to the Hebrews because of their religion, because they had more than one religion. What held them together was their oppression,” which we see in Exodus 3, for example. We also see this reflected in Jesus’ pronouncements, according to Hendricks. “Why is this good news?” Hendricks asked about Jesus’ public reading of the scrolls kept in the synagogue in Nazareth. “Just like the Exodus, Jesus is talking about structural change.”

“This is the root event of our faith,” Hendricks said of the Exodus. “Out of this event the Hebrews developed their own form of governance, the 12 tribes, and didn’t have a king, which was revolutionary and dangerous. What they did have was judges, those who do justice. They were leaders raised up when people were threatened by oppression.”

“Mishpat,” the Hebrew word for “justice,” is mentioned more than 400 times in Bible, Hendricks said. In the vernacular, it means this, he said: “Everybody should have the same right to be all right.” A qualifier, he added, is that it applied to women “only as to their membership in their father’s house. That’s a real failing.”

“Sedaqah,” or “righteousness,” is the Bible’s second-most-often occurring ethical concept, he said. “What isn’t preached enough is the concern of the Bible is community, not individualism,” he said. “Doing right by others is what’s right.”

For Jesus, “love your neighbor as yourself” was “so fundamental” that his call is for an egalitarian social justice, Hendricks said. “Our churches have become so beholden by domination readings of the Bible that none of this is clear,” Hendricks said. “Justice is the most important concept in the Bible, and we hear barely a word about it in our churches.”

Other than the topic of God, “Jesus talks about poor people and poverty more than anything else,” Hendricks said, calling Jesus’ commandment to love neighbor as oneself “the pre-eminent outward-facing commandment, to make this a society and world of fairness.”

“He said, ‘This is who I am and what I am about,’” Hendricks said. In the Judgment of the Nations found in Matthew 25, “why are the goats going to hell? They haven’t tried to make a just and loving contribution to society.”

“I hope I have given some sense why outward-facing ministry is inextricable from Christian ministry,” Hendricks said, concluding his first talk. 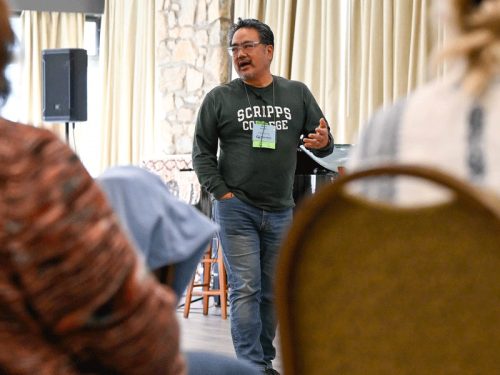 In between Hendricks’ talks, the Rev. Bruce Reyes-Chow led attendees through practical steps they might take at home. (Photo by Rich Copley)

During his second talk, on empowering servant leadership, Hendricks said his goal was to share what he calls “Jesus’ strategies of empowering the people.”

First comes the Lord’s Prayer, “a radical pronouncement that has become the go-to thing you say when you don’t know anything else to say.”

The “forgive us our debts” part, for example, can be translated “release our debts, as we have also released the debts of others,” Hendricks said.

“It comes down to this: How should we pray? That we treat people’s needs as holy,” Hendricks said. “I think that’s an important perspective for servant leaders.”

Another strategy is giving voice to the voiceless, which Jesus demonstrates by cleansing the temple. Jesus’ concern “is not just money changers, but the temple apparatus, which enriched an already rich priestly class,” Hendricks said. “Those people lived large, man.” 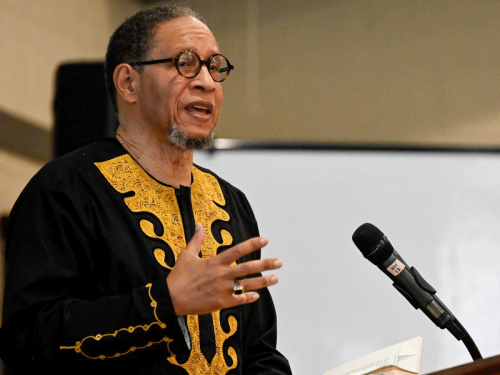 Dr. Obery Hendricks, Jr., is the author of, among other books, “The Politics of Jesus.” (Photo by Rich Copley)

When he heals a man possessed by demons, Jesus demonstrates his point that “it’s not about the occupation of an individual, but the occupation of a country by a demonic hateful sprit that causes people to destroy themselves,” Hendricks said. “This unclean spirit asks to be sent into pigs, the height of degradation, and they are drowned in the sea, which evokes the Exodus motif.”

One final strategy is to show the alternative rather than explain it, Hendricks said. When a large crowd is fed as recorded in John 6, “a young boy in his innocence offers to share what he has without thinking,” according to Hendricks. “Miraculously, everyone has enough to eat.”

“There are so many things we can do. It’s important to make sure churches are congregations where everyone has something to contribute,” Hendricks said. “We have the power in our hands to make huge changes. It’s not as difficult as we think if we just use the resources we have — not just financial resources, but intellectual resources, folks with common sense and folk wisdom and true organic intellect who understand what is happening in the grassroots.”