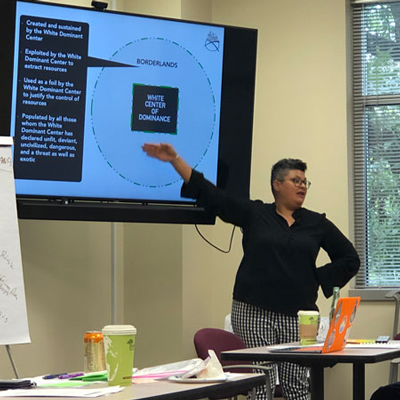 Jessica Vazquez-Torres is program director with Crossroads Antiracism Organizing and Training. Shown here in 2019, she was the featured speaker Monday for “Awakening to Structural Racism.” (Photo by Stephanie Fritz)

LOUISVILLE — On Monday more than 235 people from across the denomination spent two hours online exploring ways they can awaken to structural racism, one of three focus areas in the Presbyterian Church (U.S.A.)’s Matthew 25 invitation.

Monday’s featured speaker was Jessica Vazquez-Torres, program director with Crossroads Antiracism Organizing and Training in Matteson, Illinois. For the second straight week, Special Offerings Director Bryce Wiebe led a Matthew 25 Bible study, this one on verses 14-30, the Parable of the Talents.

Three sets of belief comprise a worldview conducive to white supremacy, according to Vazquez-Torres:

In the U.S., the concept of centeredness is built on white supremacy, she said. “White people get to settle and colonize, take and own and sell human lives. They get to determine who is the ‘us’ and who is the ‘them.’” Warfare can be fought on the home front as well as oversees. Take the War on Poverty as an example, she said, in which the enemy became poor people.

Vazquez-Torres posed these questions for discussion in small groups:

Earlier, Wiebe continued to connect teachings about the harm done by white-bodied supremacy with what Jesus teaches in the parables found in Matthew 25.

“We are here to ask Scripture how we seek a world that looks like Jesus,” Wiebe said. “We will know it when we see it. Who are we being conformed to? We study so that we can be healed and become healers.”

Wiebe explored some of themes found in the Parable of the Talents, including work, value, worthiness, shame, money and ability.

“This is a story about economics,” Wiebe said. “It makes a metaphor related to preparation, readiness and vigilance.”

He urged participants to consider during the coming days the economic implications of dismantling white supremacy.

“Economics and value are so ingrained in our culture,” he noted. “We are the most fearful when something has economic implications.”

During the Aug. 24 session, participants will learn more about work being done by the PC(USA) to dismantle structural racism. Scheduled speakers are the Rev. Denise Anderson, the Presbyterian Mission Agency’s coordinator for racial and intercultural justice, and the Rev. Ashley DeTar Birt, a member of the pastoral staff at Rutgers Presbyterian Church in New York City.