LOUISVILLE – It has been a year of endless flooding for parts of Texas, keeping volunteers from making headway in clean up efforts. The last three months have been described by state and federal authorities as the wettest in Texas history.

“In the Houston area, we thought we were prepared for long-term recovery, but instead we are still in search and recovery mode,” said Jim Ellor, state coordinator for floods with the Presbyterian Disaster Assistance National Response Team. “Houston has been going through a five-month cycle of flooding. When they think they’re ready for long-term recovery work, they have to go back to square one because of another flood.” 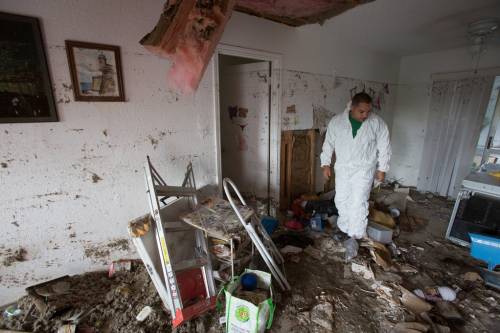 The seriousness of the high water took on new meaning recently with the deadly flooding near Fort Hood that claimed the lives of nine soldiers. Swift flooding swept the soldiers’ two and a half-ton vehicle from a low water crossing. Three soldiers were rescued.

“The challenge is the repeat flooding. When you have a hurricane, it’s usually one and done. It may hit once in an area and then wait another 10 years before it hits again,” said Ellor. “We’ve had one flood after another to the point where we are beginning to name all of our floods based on holidays. There was the Memorial Day Flood, Easter Flood and so on.”

Ellor adds that disaster response groups are responding as best they can under the circumstances.

“The various volunteer organizations are tired. Most do not have the kind of money to help with the recovery,” he said. “We didn’t get the winter off. Most of the time these kinds of problems happen in the summer. We’ve had one problem right after another since May of 2015.”

Presbyterian Disaster Assistance has been in communication with churches and presbyteries in the affected areas, waiting for waters to recede to provide additional support.

“The repeated flood events are challenging the existing resources of volunteers and municipalities,” said the Rev. Dr. Laurie Kraus, PDA coordinator. “Presbyterian Disaster Assistance is grateful for the prayers, gifts, churches and volunteers who are standing in the gap to support these communities and the churches that serve them as they move toward recovery.”

“We’re working to put together some emotional and spiritual care for the Bastrop area, southeast of Austin. The community has been hit multiple times, first with a flood, then a fire, and then flood again,” said Ellor. “It’s the repetition that is really getting to people and putting a squeeze on resources.”

For the impacted church leaders, Ellor says it’s been draining. There have been some initial discussions about housing volunteers to assist with the cleanup efforts, but before anything can be scheduled, Ellor says another flood occurs.

PDA has been receiving calls from churches willing to help when needed.

“If churches and volunteers are willing to help, organize groups that will be prepared to go once local authorities request it,” said Ellor. “If you’re in Texas, stay safe. We are coordinating long-term recovery efforts through PDA’s National Call Center.”

For information on how to help those impacted by the flooding, click here. To contribute to the relief efforts, give to account number DR000191.