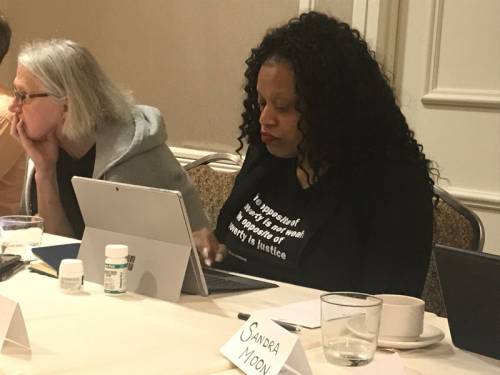 The Rev. Denise Anderson, coordinator for Racial and Intercultural Justice, leads anti-racism and environmental justice training for the Mission Responsibility Through Investment Committee last week. To her right is Sue Smith, stated clerk for Monmouth Presbytery. (Photo by Mike Ferguson)

NEW ORLEANS — To hurt the Earth is to hurt the poor, Gordon Aeschliman wrote in “The Green Bible: Understanding the Bible’s Powerful Message for the Earth.” He added: “It shouldn’t be surprising that creation and justice are inextricably linked” and that to keep the garden, as humans are told to do in Genesis 2, is the same notion as the Numbers 6:24 blessing: The Lord bless you and keep you.

“In the manner that God keeps us,” Aeschliman wrote, “we are to keep creation.”

“If we are wealthy, there’s this sense that we live above the land,” the Rev. Denise Anderson, coordinator of Racial and Intercultural Justice for the Presbyterian Mission Agency, told the Mission Responsibility Through Investment Committee last week during a two-hour anti-racism and environmental justice training session.

The committee’s trip to New Orleans is a response to a 2018 General Assembly action on responding to environmental racism and promoting environmental justice, brought by Monmouth Presbytery in New Jersey. The overture includes making the effort to listen “to the perspectives and voices of people most impacted by environmental racism with awareness to cultural diversity domestically and internationally.”

According to the overture’s rationale, environmental racism is a term coined in 1981 to describe “the disproportionate burden of environmental problems that people of color take on. People of color are more likely to live in areas more exposed to pollutants in the air, ground and water … and people of color generally have fewer resources to escape environmental disasters. Moreover, undocumented migrants in the United States are less likely to seek government assistance in recovery efforts, as they fear detention and deportation.”

Racism, Anderson said, is different from racial prejudice, hatred or discrimination. Racism involves one group having the power to carry out systematic discrimination through the institutional policies and practices of the society.

Structural racism is how the racist and discriminatory practices of institutions intersect to create a network of opportunity for people in the white group while blocking opportunity and access for people of color and their communities.

The U.S. Environmental Protection Agency, she noted, has defined environmental justice as “the fair treatment and meaningful involvement of all people regardless of race, color, national origin or income, with respect to the development, implementation and enforcement of environmental laws, regulations and policies.” The EPA says that goal will be realized when everyone enjoys both the same degree of protection from environmental and health hazards and equal access to the decision-making process to have a healthy environment in which to live, learn and work.

During her training session, Anderson made the distinction between non-racism and anti-racism this way: If you saw a car crushing somebody, is it enough just to hold that person’s hand?

“You want to get that car off them,” she said. “Anti-racism practices are practices that counter racism. I can’t teach you to be anti-racist. It’s a process you have to embody, and the first step of any process of recovery is to admit there’s a problem.”

Action items that individual Presbyterians can take include these, Anderson said:

To read stories of the MRTI Committee’s encounter with communities of color affected by both natural and human-caused events, read here and here.