What does living justly mean?

Diane Moffett is a busy woman. Six months into her role as the Presbyterian Mission Agency’s president and executive director, she has been to countless meetings and other events, sharing her vision for what she calls a “Matthew 25” church — one that gives food to the hungry, water to the thirsty, care to the sick, companionship to the lonely, and welcome to the stranger.

Moffett, though, doesn’t just share a vision for a Spirit-filled denomination that serves society’s least. Moffett embodies that Spirit with passion and warmth.

The mother, wife, pastor, activist, community builder — the list goes on, including author and former mayoral candidate — talks more freely about the Holy Spirit than is typical for most Presbyterians. (“Do you feel that? I call it Holy Spirit goose bumps,” she said recently at a Presbyterian Hunger Program meeting.)

Moffett has always been busy.

But as the saying goes, if you want to get something done, ask someone who is busy.

Presbyterians Today editor Donna Frischknecht Jackson caught up with Moffett to talk justice and how we can do our part in making the world a better place — and get those Holy Spirit goose bumps, too.

You have served as a pastor in East Orange, New Jersey; Oakland, California; and, most recently, Greensboro, North Carolina. In all these communities, you have made a difference helping others. I’m curious, what’s your earliest memory of helping someone?

My mom would tell you I was the one always leading the way and helping others who were having a hard time, even as a kindergartner. Though I was in kindergarten myself, if my classmates were crying because it was their first day, I would be there to help.

I am sure that was comforting to the other children and a help to the teacher. Did it inspire the other kids to help as well?

I had a friend, Gary, and we decided early on that helping would be “our thing.” We would take care of all those at our table.

What was your first official leadership role?

Growing up, who was your role model when it came to justice work?

I would say what influenced me was not so much a person, but rather the stories I heard growing up that were seeded in me.

Can you give me an example?

My mom bought an LP record, a 33, I remember, of Dr. King’s sermons and speeches. That record would be playing in the background as we got ready for school. That’s what I mean by the stories that seeded me.

Another story was the one my grandmother told about how my grandfather would insist on voting, even though being a man of color, going out to vote was a dangerous thing to do. Still, he did it. He took the risk.

(Editor’s note: The 15th Amendment to the Constitution granted African-American men the right to vote. Although it was ratified in 1870, it wasn’t until the passing of the Voting Rights Act of 1965 that African-American voter turnout increased significantly.)

Why did he take such a risk?

He would answer, “What kind of life would my children have if I didn’t vote?”

Since we’re on the topic of voting, what made you become a mayoral candidate in Greensboro, North Carolina, in 2017?

It wasn’t on my bucket list, but I was active in the community and so I was asked to consider running. At first I thought, “Really, me?” Then I thought, “Why not?”

Did you have any political role models that influenced you or guided you?

I remember in the 1970s, Rev. Frank Pinkard, a Presbyterian pastor at the time, who later became a Baptist — why I call him a “Bapterian” — running for mayor in Oakland, California. He struggled with his decision and shared his struggles with his congregation, but he wanted to be part of working on the issues then that still plague us today. I still remember the bright orange campaign button he wore that said, “The Rev.”

Did you struggle with the idea of running for public office?

What changed your mind?

I thought, “You have to put feet to faith and legs to love. You have to become that love with skin on it.”

Obviously, you didn’t win the mayoral race — lucky for the PC(USA). I heard, though, that you had a strong showing for a newcomer.

I did. I got asked a lot how I got all those votes for a newcomer.

By just being the voice of the one not heard, not represented. There’s a place for everyone at the table.

What advice would you give Presbyterians who cringe when they hear the word “justice,” thinking they are in for a political sermon?

Go back to the words of Jesus. He preached a lot about the kingdom. And then wake up to the opportunities around you, no matter where you are. We are called to empty ourselves; carry the cross.

How can we get better at “carrying the cross”?

Presbyterians are good doing “soft” ministries — serving food, providing clothes. But what about looking at the systemic causes? Asking the hard questions? Why are people in poverty? Why is there still racism? Ask. Pray. Then allow God to lead you to tangible actions.

It’s that emptying ourselves thing, isn’t it? Can you share what it is that you pray for?

I want to know Jesus. Both the fellowship of his suffering and the power of his resurrection. I want to see what God sees. That is the greatest prayer to pray.

Thank you for your time, Diane.

Wait, before you go, let’s pray. 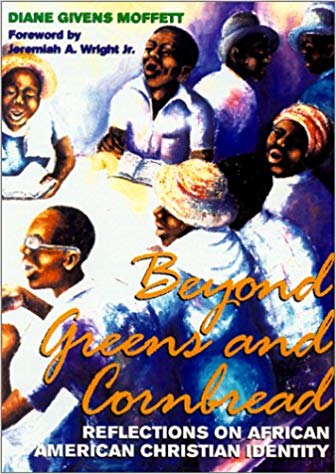 In 2002, Diane Moffett had a book published, Beyond Greens and Cornbread: Reflections on African-American Christian Identity, which relays the messages of African-American hopes and dreams and calls for Christians of every culture to move beyond challenges and traditions into a future filled with hope and expectancy.