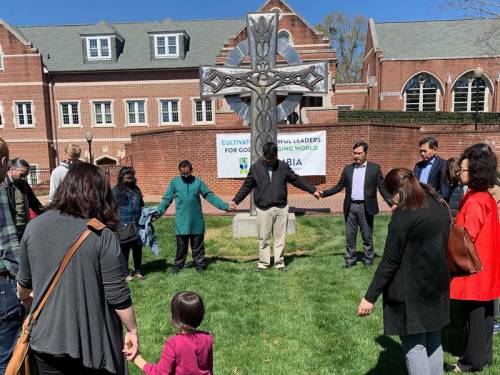 LOUISVILLE — International students at Columbia Theological Seminary say they want their voices heard as controversy has erupted on campus.

The controversy began Jan. 31, when seminary president Dr. Leanne Van Dyk announced a strategic realignment in the seminary’s Office of International Programs. Students represented by the Coalition of International Students and Allies say their voices weren’t heard when the decision was made, and that the move effectively dismantled the program.

Before Van Dyk made the announcement, the seminary’s International Programs coordinator, the Rev. Kim LeVert, had already resigned to care for aging parents. Shortly after the strategic realignment became public, the program’s director, Dr. John Azumah, resigned to return to Ghana to work on a Christian-Muslim dialogue project, according to Van Dyk.

In addition, the contract with Dr. Kevin Park, an associate dean for advanced professional studies whose duties included directing Korean-American ministries, was not renewed. Seminary officials said the contract nonrenewal was not due to the strategic realignment.

“It was a perfect storm,” Van Dyk said, of LeVert’s resignation for personal reasons, Azumah’s choosing to leave sooner than anticipated for his position in Ghana and Park’s contract nonrenewal.

According to Van Dyk, the strategic realignment increases dollars, people, transparency and accountability to the program serving international students. As part of the realignment, six people share the job responsibility — in addition to their current duties — for international student support, rather than one person, as was the case previously.

With a list of demands in hand, 15 international students met with Van Dyk twice in February. Their demands included reinstating Park as the new director for the International Programs Office. Van Dyk says she couldn’t do that because the nonrenewal of Park’s contract was a faculty governance decision.

Van Dyk said the six people who will share responsibility for international student support are well-qualified and have global experience. She said the seminary has distinguished itself by creating a working strategy to address white privilege and racial discrimination.

“Any accusations of institutional racism around this story are flawed,” she said. “I did say to them, ‘We have been listening to you for several years’” in multiple listening sessions and dozens of conversations, “asking them, ‘What do you need?’”

Park, who pastored many of Columbia’s international students, said he believes they are crying out for visible representation. For many, English is a second language.

“They’re not looking for an academic, programmatic or curricular resource,” he said. “What they want is a relational resource, someone who will advocate for them.”

Park said he wishes Van Dyk would have been able to make what he called a “heart-to-heart connection” with students who came to her with a list of demands.

“But the spark that lit this fire was clumsy communication and that’s on me,” she said. “The painful irony is that we made these decisions to increase and enhance our support to our international students.”