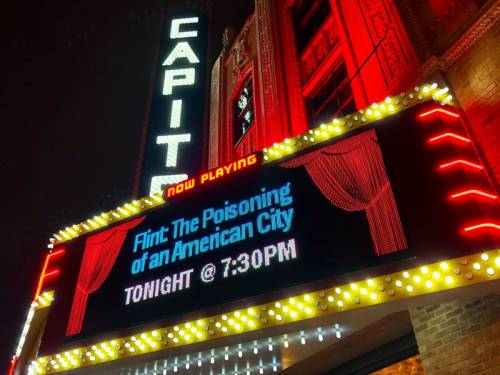 Story Ministry’s “Flint: The Poisoning of an American City,” had its debut last year in its namesake city. (Contributed photo)

FLINT, Michigan — David Barnhart was talking the morning after the world premiere of his documentary for Presbyterian Disaster Assistance’s Story Ministry, “Flint: The Poisoning of an American City,” in its namesake city.

After years of working on the documentary about the water crisis that began when toxic levels of lead were allowed to enter the city’s drinking water system, Barnhart has become committed to the city and many of its residents who shared portions of their lives to help the film become a reality.

“All of our work is rooted in relationships and when you sit and listen to people and their stories over time, you become deeply connected with that community. It just builds up in layers and those emotions come out whether you want them to or not,” Barnhart said.

From communities suffering the aftereffects of a powerful tsunami to survivors of gun violence to refugees ensnared in an inhumane immigration system, Barnhart has sat with a lot of people who have endured excruciating trauma to share their stories with Presbyterians and wider audiences in his films. “Communities invite us into these sacred spaces to walk with them and we do this Story work together.”

As a partner and custodian of these stories, Barnhart doesn’t measure his success by traditional cinematic metrics, such as sales and awards. But even by those standards, 2019 was a banner year for Story Ministry.

Screenings continue into 2020. A reception and screening will be held during the NEXT Church national gathering beginning at 7:45 p.m. Monday, March 2, in the Harriet Tubman Theater at the National Underground Railroad Freedom Center. A follow-up lunch with Barnhart begins at 12:15 p.m. the next day. 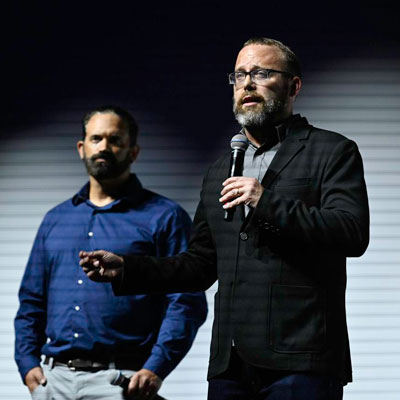 “Flint,” a full-length documentary, led the charge with its world premiere in Flint and subsequent premieres coast to coast, engaging Flint community members and people concerned with local water rights issues in conversation. Even before its premiere, “Flint” picked up the Frank Little Award for Self Sacrifice and Social Change at the Covellite International Film Festival in Butte, Montana, and since its world premiere tour, the film was picked up for distribution on Amazon Prime, iTunes, Google Play and OnDemand for cable services such as Comcast, Spectrum and Charter.

Also picking up distribution on Amazon was “Trigger,” Story’s 2014 film about gun violence. And “Locked in a Box,” a 2016 film about immigration detention, was screened at New York City’s Indie & Foreign Film Festival and won the Immigration Advocacy in Documentary Film Award. 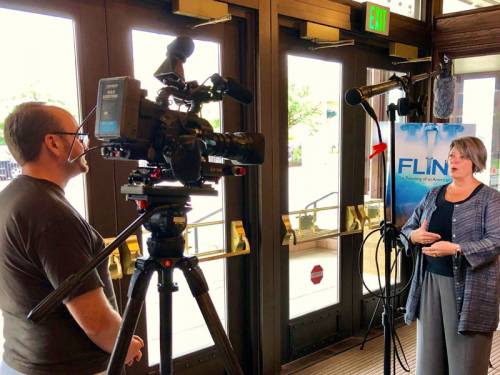 Rather than call filmmaker David Barnhart a storyteller, the Rev. Dr. Laurie Kraus, director of Presbyterian Disaster Assistance, calls him “more of a channeler of story.” (Photo by Rich Copley)

“David is really more of a channeler of story than he is a storyteller, because David, more than almost anyone I’ve ever met, listens so deeply, and lets the story speak itself,” said the Rev. Dr. Laurie Kraus, director of Presbyterian Disaster Assistance (PDA). “He honors, so profoundly, the voice of the people whose story it is, and he doesn’t shape that story or push that story. He lets that story emerge, and then he opens his arms to hold that holy space so that that story can tell itself.

“Because of that, you don’t have to be a church person to get the power of the stories he’s telling or to be impacted by it and to want to use your experience to help you change the inequities that that story has revealed.”

Barnhart came to his current work as a filmmaker through work as an associate with PDA in Mexico and Central America. He began to use his background in filmmaking to create unique reports from the field.

That soon led to short and long-form documentaries that even made their ways onto network television. Most of Barnhart’s recent work has been with producer and editor Scott Lansing out of his Sabotage Film Group, based in Norcross, Georgia.

While the films are being screened in mainstream venues, Barnhart maintains that they are in essence educational resources for the Church and for people interested in the issues they address. That is reflected in how “Flint” has rolled out, with screenings accompanied by panels with local officials and activists discussing local water issues.

“You have people that are coming with a purpose,” Barnhart said. “I think that it’s really important to almost challenge the audience before the screening and during or after: ‘You know what, we’re not just coming here to listen. We’re coming here with intention, and what are you called to do? How can you engage? How can you be a part of a movement for change?’”

In recent years, particularly with the advent of platforms such as Amazon Prime Video and Netflix, documentary film has grown as a tool of social justice movements, and Story Ministry films give the Presbyterian Church (U.S.A.) a voice in that arena. 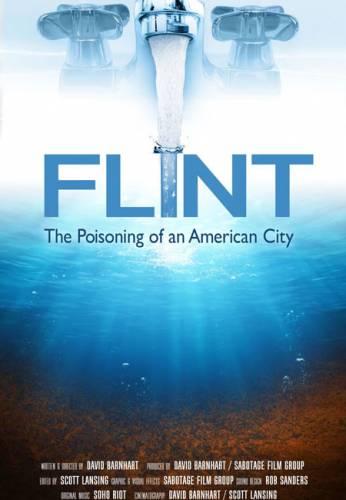 Even as “Flint” has rolled out, Barnhart has been on to the next projects, including wrapping up a series on race called “Trouble the Water: Conversations to Disrupt Racism and Dominance.” This project is the result of the collaboration across two Presbyterian Church (U.S.A.) agencies and several offices and initiatives as well as a response to recent General Assembly actions. As our nation struggles with these deep systemic and structural issues daily, the PC(USA) hopes this series can be a resource to bring people together through story, listen to one another, have difficult but honest conversations and collectively work together to disrupt systemic racism.

Barnhart is also taking initial steps toward a project on Puerto Rico in the aftermath of Hurricane Maria, and he is contemplating returning to the topic of gun violence, which has certainly evolved in the five years since “Trigger” was released.

As always, Barnhart’s approach is to start by connecting with the people at the heart of the issue he is tackling, before the first frames are captured.

“When you walk into that environment, in that space, you realize the sacred ground that you’re on, and you have to go and listen,” Barnhart said. “There’s really no other thing that you should do except accompany people and listen to people.

“When you do that, and do not bring your own agenda into the conversation, and ask the question, ‘What is at the heart of all of this?’ What you find is the humanity. And that is what we hope the films can do: go deeper into the issues and find and lift up the humanity that is there.”