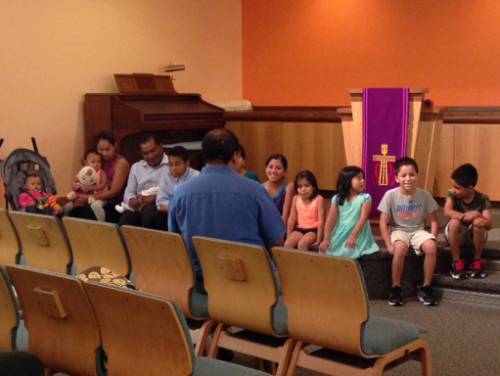 LOUISVILLE – It all began in Pittsburgh over a Primanti Brothers sandwich.

When the Rev. Dr. Clinton “Clint” Cottrell, pastor and head of staff at Cypress Lake Presbyterian Church in Fort Myers, Florida, sat down at the famed sandwich chain during the 220th General Assembly (2012) to break bread with his Peace River Presbytery colleague, the Rev. Miguel Estrada, their long-held dream took shape.

“We had been talking about a Spanish-speaking ministry for a long time, but this was the pivotal moment,” said Cottrell. “We were discussing the fact that we have a very substantial Spanish-speaking population living within a couple of miles of the church and not a single mainline church within the community was offering anything in Spanish. So here’s a need right in the community that is going unmet.”

Returning to Florida after the assembly, Cottrell and Estrada—an ordained Presbyterian teaching elder and regular worshiper at Cypress Lake, who was called in 2007 to serve the presbytery’s mission to the farmworkers at Immokalee—immediately scheduled a meeting to present their proposal.

“The church was willing to take a risk and try it, but from day one we said that if we do this, this cannot be a separate church,” Cottrell said. “If we do this, we are one church.”

Meanwhile Cottrell was learning more about the Presbyterian Mission Agency’s 1001 New Worshiping Communities initiative, which had just been approved by the Pittsburgh General Assembly.

“We were maybe the second group to file our paperwork and be approved by 1001,” said Cottrell. “We applied for a grant and we got it.”

Less than one year later in February of 2013, the church’s Spanish-speaking ministry, Iglesia Presbiteriana Cypress Lake, was born.

“On our first Sunday, we had three wonderful Spanish-speaking worshipers, Miguel, Marifrans, and their son, but that did not deter us,” recalled Cottrell, “and, as they say, the rest is history.”

Today the Iglesia Presbiteriana Cypress Lake averages some 40 worshipers and could count as many as 100 people in attendance—enough to charter as a church—should that be God’s vision.

Additionally, just as the Spanish-speaking ministry was being launched at Cypress Lake, the Beth-El Farmworker Ministry, under whose auspices Estrada previously served as mission pastor, discontinued its work at Immokalee. Because the presbytery then found that it could not afford to pay Estrada full time, Cypress Lake acted to hire him as a 1/4-time stated supply while Peace River agreed to pay him the balance to serve at Immokalee through the presbytery’s Mision Peniel. “It was a way to permit the mission in Immokalee to continue unabated with the same leadership, which is extraordinary,” Cottrell said.

At Cypress Lake, worship is held both in English and Spanish, with some services conducted using both languages. The English and Spanish-speaking communities also sponsor such joint programs as Vacation Bible School, an after-school program targeting primarily Spanish speakers, and a host of fellowship events.

“The meals that we share provide the kind of space where we can interact to help break down the fears that people have against people,” said Estrada. “When you can sit and eat together, it makes a huge difference. We also use music as a way to connect people.”

Cottrell said that in telling Cypress Lake’s story, there are two things that he can’t stress enough.

“First, there’s prayer,” he said. “You don’t run into this quickly. Second, we were going to do this whether the Presbyterian Mission Agency or the presbytery or anyone funded it or not. The only difference was that if we were to have done it ourselves, the mission would have been substantially more limited than it would have been with resources from the outside.”

That is not to minimize the impact of the New Worshiping Communities Seed Grant and other funding support offered through the initiative.

“The grants made a huge difference as we have been able to grow so much faster and more effectively,” said Cottrell, “but we were committed to the mission, and trusted God would support us.  I personally think that was a key element.  Just how committed are people to the mission?”