…be led forth in peace. (Isaiah 55:12). Support to the Peace & Global Witness Offering.
Make A Donation Click Here >
Home › Setting the table and adorning the walls 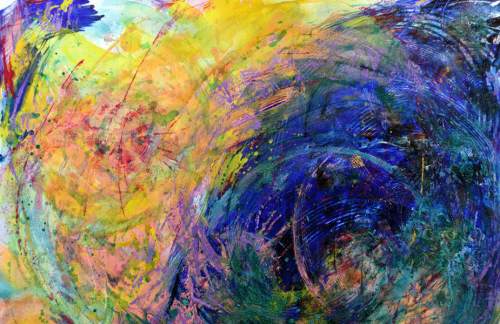 LOUISVILLE — Commissioners and advisory delegates at every General Assembly will tell you a highlight is worship, which is always thoughtful and inspiring, appealing to both the eye and the ear.

For worship at the recently-concluded 225th General Assembly, which most people engaged online, one of the many people who set the stage — for opening worship, it was literally — was Louisville artist Suyun Son, the wife of the Rev. Samuel Son, diversity manager for the Presbyterian Mission Agency and a talented artist and, as anyone who saw her set the communion table for opening worship, a dancer as well.

Opening worship was held in the Chapel at the Presbyterian Center on June 18 and can be seen and heard here. With a backdrop of one of her paintings, David’s Dance-Wave, Son used dance (beginning at the 16th minute) to prepare the communion table, which to her “holds both lament and hope,” the theme of the assembly. 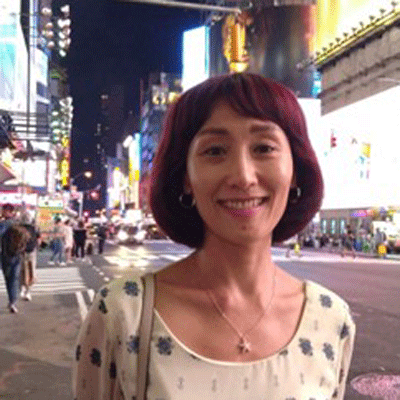 “Jesus, who prepares the table, holds lament and hope in his body,” she said. “He laments the loss of friendship and the unjust death planned against him. The first communion — Jesus creates a new community that is to be shaped by the remembrance of his act of making whole through brokenness.”

Son covered the communion table with five different colors inspired from the traditional Korean color spectrum Obangsaek: the five colors (blue, red, yellow, white and black)  representing five movements (east, south, center, west and north) and five elements (wood, fire, earth, metal and water).  She topped those colors with the communion elements. In the end it was a table “prepared through a dance embodying the dynamics of lament and hope,” she said.

“The theme was very contemplative,” she said, adding she intended the dance to “represent my heritage through body gestures.” It was also a contemporary theme, inviting worshipers to “be open and accept different cultures.”

Her paintings, which she called “David’s Dance Series,” were featured on the covers of worship bulletins used throughout the assembly. 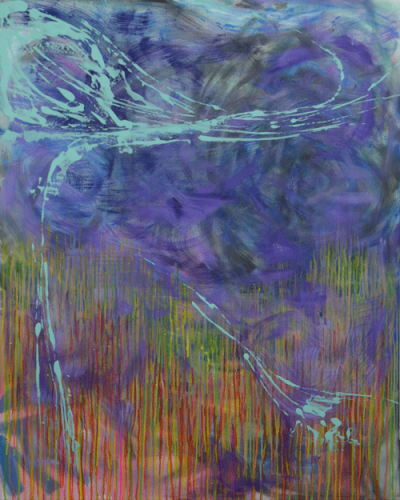 “David always praised God. He never forgot God was with him,” she said. “The ‘lament and hope’ theme was perfect,” because “through lament we see the hope.” While she painted the series “unconsciously, later I found David’s expression in my painting.”

Psalms attributed to David “move in lament and hope,” she said, “not linearly, where hope comes after lament leaves, but like a dance, where hope and lament are in an embrace. Lament expresses hope, that brokenness is not how it should be. Hope gives us space to lament.”

One featured painting looked even further back — to Abraham. She drew inspiration from Gen. 15:5, where God instructs Abraham to “Look toward heaven and count the stars, if you are able to count them.” God then assures Abraham: “So shall your descendants be.”

“I was thinking of Abraham. He didn’t know where to go, and he couldn’t see a future,” she said. “God told him to look up, and that was my inspiration. Even though we cannot see the future, I just started drawing the stars in a constellation. God is in control. God knows what’s best, and so we want to keep looking up to the sky.” 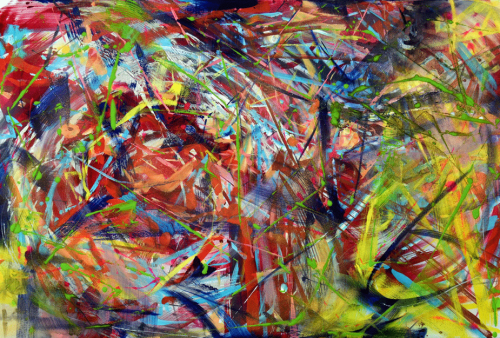 Suyun Son’s painting “Promise” was inspired by Genesis 15:5, the story of God directing Abraham’s gaze toward the heavens. (Photo courtesy of Suyun Son)

“That,” she said, “is inspiration from both Abraham and God.”

Son said her parents took in GA worship from their home in California. They told her they appreciated having the services translated into Korean. Her mother “watched it over and over,” she said. Both friends and family got to see her work, which she said is correctly labeled “God’s work.”

Friends told her having her art serve as the covers to GA worship bulletins made them look more like magazine covers, according to Samuel Son.

“They were surprised and said how much it added to the worship service,” he said. “Outside of the fact that it’s my wife’s work,” [her artwork] helped worshipers “get outside the words. It engages another part of your brain. You can read a psalm, but to feel some colors I think opens you up more. Words put you in critical, logical thinking. Art is just there. You are invited to experience it and encouraged to engage in the emotional side of it. You come with a lot more openness.”

A few of Son’s pieces were made into prayer cards, and the artist said she was pleased with that development as well.

“Prayer invites us to movement,” she said. If a group or a congregation is using the cards, “I feel there is more collaboration, more working on goals together. When we move with prayer, people’s hearts move.”