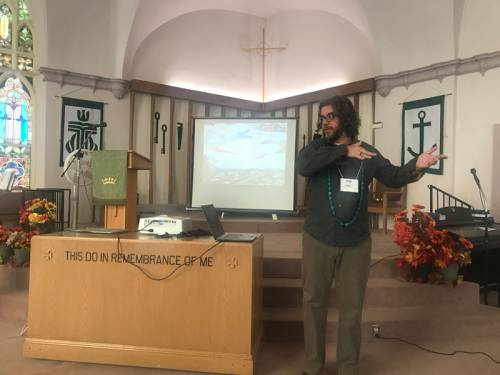 DOUGLAS, Arizona — As a boy growing up in Brazil, the Rev. Dr. Cláudio Carvalhaes said he was afraid of the dark. At bedtime it comforted him that his father had the light on in the next room. “I could see the light where he was, and that was my resting place,” said Carvalhaes, associate professor of worship at Union Theological Seminary in New York City, during last week’s “Responding to an Exodus: Gospel Hospitality and Empire” celebration of 35 years of ministry by Presbyterian Border Region Outreach, formerly Presbyterian Border Ministry, and hosted this year by Frontera de Cristo. Carvalhaes led a Friday morning workshop he called “Preaching from the Darkness” at First Presbyterian Church in Douglas, Arizona.

He called going into the darkness and embracing it “a new development for me, and a blessing.” While praying with his son, “we tell God we are not afraid of the darkness. I feel like I’m praying to the little boy inside of me.”

But how to preach and pray from the darkness of our time? Salvadoran migrant Óscar Alberto Martínez Ramírez drowned last June trying to cross the Rio Grande River alongside his young daughter Valeria, who was wrapped in his shirt. Carvalhaes asked, “How do we deal with the death of Eric Garner? He tells us about the darkness of our culture in ways we don’t want to see.”

Then there’s the LeBaron family, ambushed and murdered earlier in November fairly near the spot where the conference was being held. “What we learn from the people from Frontera de Cristo is that they have learned to keep life being seen in the face of death,” Carvalhaes said. “We live in very dangerous times, but we still have the gospel to preach. It is good news to a world that is filled with death.”

Jews of the Bible “had a boldness to talk to God where we Christians are so afraid,” he said. “Moses said, ‘Either change, God, or we are separating our ways.’ We Christians are protective of God: ‘I am sorry, God. I didn’t mean it. I was angry, I’m sorry.’ I wish we would get that nerve, that sense of trust that we see in Jewish Scriptures. They know God so well they can say anything, but we are so afraid. It’s like a first date when you remember all the things you said that were wrong, or things you didn’t say. It feels like we are on that first date with God, but I have the sense that God can take it.”

Jesus felt darkness and abandonment on the cross, Carvalhaes said. “That’s what our brothers and sisters at the border feel sometimes — where is God? How do we handle the goodness of God with the absurdity of the world? It’s hard.”

“The way to deal with pain and darkness and the sorrow of the world is not to shut down and move away,” he said, “but to go deep within the pain so we learn what the pain is made of and what tools we have to go through that pain.”

A number of churches, he said, have pushed aside their insurance company’s concerns about liability to serve migrants — some creatively. A Midwestern church determined it couldn’t open a shelter or formally declare itself a sanctuary — but it could offer a prayer vigil in its sanctuary each day during an especially cold winter. “The door was open so people could come in and pray. There were 50 people praying out loud. Does snoring count?” he asked, and workshop participants laughed. “It’s not a shelter — it’s prayer time. I love that church! You go around liability (concerns) and do the gospel.” 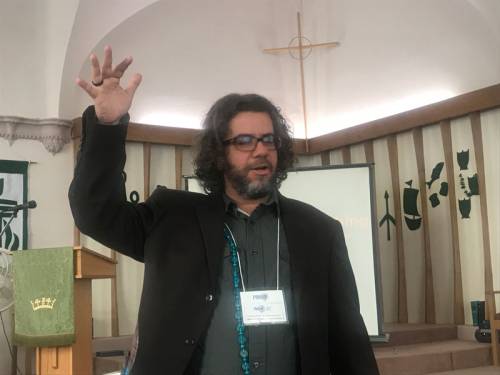 The Rev. Dr. Cláudio Carvalhaes learned the importance of prayer from his mother, who’s now 88 and doesn’t take phone calls twice each day when her church’s prayer chain is operating. (Photo by Mike Ferguson)

Getting through the darkness requires the use of spiritual disciplines, he said. For his mother, it’s a rich prayer life that goes back decades. If young Cláudio told her that saying his morning prayers would make him late to school, she’d insist that he pray and then wait until she completed her own time with the Lord before dismissing him. When Buddhists pray, they name their ancestors. “Every time they walk, they feel their parents and their grandparents walking right alongside them,” he said.

Carvalhaes discussed an event for which he gained some notoriety among certain political pundits: he had his seminary students confess climate sins to plants, to “listen to their voices as we listen for the voice of God.”

“Jesus talked to a fig tree. He wasn’t nice to it, but he talks to it,” Carvalhaes noted. To biblical writers, “our God is a bird — an eagle, a hen, a dove. If we worship God as a bird, we aren’t out of the Bible … We are making God too small, shrinking God into something we can control.”

“We forget that bread and wine came from the ground,” he said. “Who harvested the very wheat and the very grapes that come to our places of worship? It is immigrants, most of them undocumented. Do this in remembrance of me?” he asked, pointing to a form of the common phrase carved into the front of the church’s communion table. “We can celebrate communion because of the work of the people we keep in the shadows.”

His mother’s now 88, and Carvalhaes knows never to call her at 10 a.m. or 3 p.m. That’s when she and her fellow congregants conduct their prayer chain over the telephone.

“No one can call her then, not even her own kids,” he said. “’An emergency can wait! Just let me finish my prayer.’ There is this fundamental awareness of her relationship with God, that everything else can be lived if you go through it with prayer.”

Read another story about “Responding to an Exodus” here.