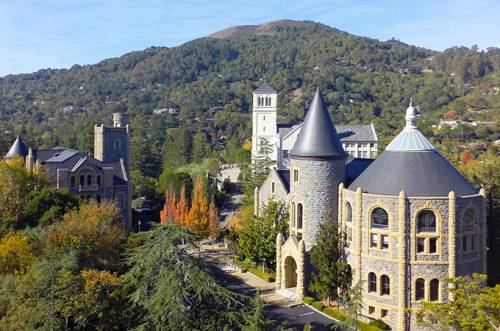 LOUISVILLE — San Francisco Theological Seminary and the University of Redlands in Southern California have signed an agreement in principle that the university says will lead to the acquisition by this summer of the Presbyterian-related seminary in Northern California.

In a statement released Monday, University of Redlands President Ralph W. Kuncl said the university’s board of trustees voted last week to adopt the agreement to “move toward the acquisition, expected by July 2019, of SFTS in order to form a new graduate school at the University of Redlands — the Graduate School of Theology — and a new regional campus in the Bay Area.”

Shortly after that announcement, the Rev. Dr. Jim McDonald, SFTS president, said in a statement that the seminary’s board of trustees on Feb. 12 “made a courageous, faith-filled decision to enter into a transformative partnership with the highly-respected University of Redlands.”

Together, McDonald said, the institutions will create a new Graduate School of Theology “that will embed SFTS with the University of Redlands. This will allow SFTS to continue its mission, expand its reach and carry forward its legacy as the Presbyterian Church’s seminary of the West.”

“We truly believe,” McDonald said in his statement, “that this new possibility is God’s doing.”

SFTS currently has about 160 students pursuing master- or doctoral-level degrees. McDonald said by telephone that he told students on Monday, “You are not going to see anything change. You’ll still be studying and getting your degree from SFTS. You’ll be studying with the same faculty and staying in the same housing.”

“We’ve said nothing is going to change, but on the other hand, this is a big change,” he said.

Some at SFTS will lose their jobs —  McDonald included.

“Probably sometime this summer I’ll step down as president, and I’m fine with that,” he said. After that, he said his job will be to speak to graduates,  donors, presbyteries and synods — as well as General Assembly next year in Baltimore. 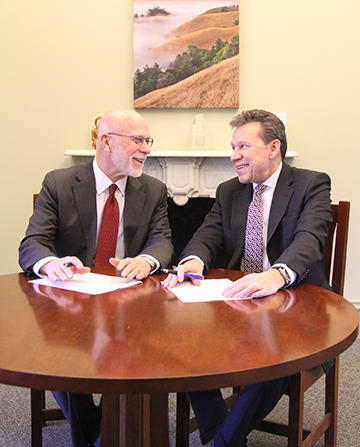 “As we looked to the future, we recognized the need and imperative to re-imagine and reset our course to meet a changing world,” McDonald said in the statement. “Our partnership with the University of Redlands accelerates our efforts to make this essential transformation.”

Before the agreement in principle was signed by both parties, the two institutions developed a joint continuing studies program — the Mental Health and Spirituality Certificate — which will hold its first classes next month. That program, McDonald said, is designed to teach and guide community leaders, building knowledge and competencies in mental health, spiritual care and community engagement.

“We are very excited about the opportunities this new relationship creates for students from all walks of life,” McDonald said. “We remain committed to educating persons for transformational ministries of peace, healing and justice as we pursue these new pathways of possibility.”

When discussions began between the institutions a year ago, university officials told McDonald, “You don’t want to sell this property, and neither do we,” he said. “This is a beautiful campus and it’s inspiring to people.” The university “has every intention  of utilizing this campus long into the future — maybe forever,” McDonald said.

He said the university operates about a half-dozen satellite sites, including one in Salzburg, Austria.

“They are used to operating campuses from a distance,” McDonald said. “This is not a new thing for them.”

In its statement, University of Redlands called SFTS a “one-of-a-kind regional campus property.” It said thriving in today’s landscape of higher education can lead standalone seminaries to “embed within a larger, financially sound university.”

That’s now the case in about 40 percent of seminaries and divinity schools, McDonald said, including some very well known institutions such as Harvard, Yale, Duke and Emory.

“By becoming a part of the University of Redlands, SFTS expands its access to students in Southern California (especially in the fast-growing inland region), who may be attracted to an SFTS-inspired education with a connection to the Graduate Theological Union,” the university said in its statement. In addition, the partnership will also “dramatically expand the seminary’s ability to offer interdisciplinary degrees and certificates in creative new combinations” with the university’s academic programs and other education resources.

U of R will remain a nonsectarian university. With the new U of R Graduate School of Theology, SFTS will, the university said, “continue as a multi-faith seminary, founded and based in the Reformed tradition with historic ties to the Presbyterian Church.”

The university said it will assume SFTS’ debt, which will be “more than offset by substantial tangible assets and other benefits,” including a “significant” endowment, valuable property, current tuition-paying students whose numbers are expected to grow, endowed faculty scholars and access to “a major new market.”

Details of the transaction are still being worked out, and the process of securing approval from educational accreditors is needed.

For nearly 150 years, SFTS has prepared students from around the world for various forms of ministry. It offers doctoral, masters, and certificate programs for people from all walks of life, on campus and online. SFTS is a founding member of, and partners with, the Graduate Theological Union in Berkeley, Calif.—the most comprehensive center for the graduate study of religion in North America. For more information, visit sfts.edu.

The University of Redlands is a private, nonprofit university centrally located near the beaches, mountains and desert in the heart of Southern California. The university offers more than 40 undergraduate programs, as well as 20 graduate programs in business, communication sciences and disorders, education, geographic information systems, and music—blending liberal arts and professional programs, applied and theoretical study, traditional majors and self-designed curricula. Learn more at redlands.edu.