‘God loves you and there ain’t a thing you can do about it.’ 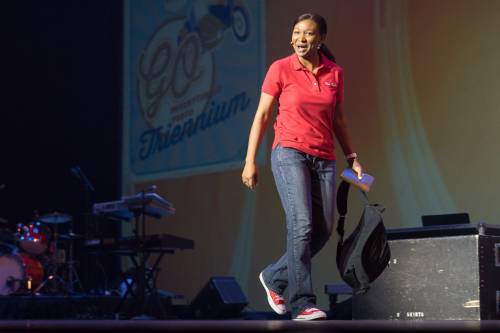 Alice Ridgill, with her backpack ‘burden’ off her shoulders, at the conclusion of Thursday’s Triennium sermon. (Photo by Gregg Brekke)

WEST LAFAYETTE, Ind. – No overcast sky could dampen the enthusiasm of the more than 4,700 worshipers who exited Thursday afternoon’s service at the Presbyterian Youth Triennium being held this week on the campus of Purdue University.

Following the opening energizers, which brought everyone to their feet—and then some—the Rev. Dr. Tom Taylor, president and chief executive officer of the Presbyterian Foundation, brought greetings and invited those gathered to thank the members of the PYT production team, the young people and their adult facilitators responsible for planning and implementing the triennial event.

“We have a remarkable concept with these Triennium gatherings, and that is we really want to put them together with the experiences and the voices of young people,” Taylor said. “What a concept!”

Following his remarks, Taylor shared some of the ways in which the Presbyterian Foundation is contributing toward Presbyterian mission around the world, not to mention right at Triennium. On cue, members of the production team then paraded across the stage sporting retro Chuck Taylor shoes, a gift from the Foundation. Afterwards, Taylor described the missional fruits of the Holden Village Taylor Guitar Project, which raised over $155,000 to put into clean water ministries, including the PC(USA)’s Living Waters for the World. He then gifted a coveted Taylor guitar to the New Zion Presbyterian Church, Clarkson, Nebraska, whose name he drew from a fishbowl. 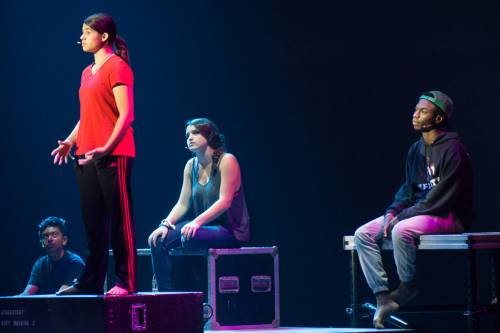 Spirited singing, woven throughout worship, was followed by a heartbreaking—yet ultimately hopeful—presentation by the PYT Drama Team, Brianna Coppolino, Francois Ibrahim, Olivia Magaraci, and James CI Williams, who all hail from New Jersey. Each told a personal story of losing a beloved family or church member to death, which, while changing them, also helped them to see God.

The afternoon’s preacher was the Rev. Dr. Alice Ridgill, organizing and founding pastor of New Faith Presbyterian Church in Greenwood, S.C., who—intentionally wearing a backpack—delivered an exhilarating sermon on the theme “Teach Me the Way I Should Go,” using Psalm 32 as her primary text.

After first defining the responsibility of teacher and student respectively as “putting the information out there” and “grabbing the information that is presented, learning it, and applying it,” Ridgill said that she wished she had preached her own sermon to herself when she was a freshman at Presbyterian College in Clinton, South Carolina.

“I didn’t know you had to study a little harder when you got to college,” Ridgill said. “I thought it would come just as easy as it did in high school, but boy, was I wrong.”

She then described cramming for her first exam in first semester Spanish, which she failed miserably. “I made a whopping 59 percent,” said Ridgill to knowing laughter. “Why are you guys cheering? That’s terrible!”

“We all fail sometimes in life,” she continued. “But the thing about failure is this: failure is inevitable, but it doesn’t have to be final. I’m so glad that we serve a God who doesn’t care about our failures or how we fail or that we fail, but about how we get up after we’ve made a mistake.”

Ridgill said that if she had believed the characterization of God as a “God of second chances,” she would have used up all of her chances long ago. 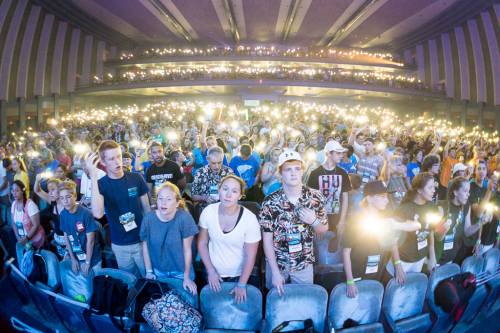 Thousands hold up their cell phone lights during the song ‘Come as you are’ at Thursday’s Presbyterian Youth Triennium worship service. (Photo by Gregg Brekke)

Ridgill then moved seamlessly to her text, Psalm 32, purported to have been written by David at a time when he was sorry for sin he committed. She then described David’s failings—and the consequences of those failings involving Bathsheba and Uriah—in some detail.

“David messed up and then he covered up,” she said. “But the cover up was a bigger mess-up that the mess-up was in the first place. The step that David skipped was God. He should have said, ‘God, I’m sorry. God, I messed up.’”

Ridgill’s message—gleaned from David’s story—is to not push God away, but to involve God in daily life. “We need God,” she said. “God wants to be there for us, because God is a ‘fun’ God.”

F-U-N, Ridgill explained, is an acronym for three aspects of God’s nature: forgiving, understanding, and never-too-busy.

“If anyone asks you later what the preacher said,” Ridgill exclaimed, “remember that God is F-U-N. Is there anyone here at Presbyterian Youth Triennium who is glad that God doesn’t say, ‘I’m busy’? God will hear every one of our prayers.”

Ridgill said that just as in her opening example of teacher and student, God teaches the way to go, “but it’s up to you whether you want to follow God’s will and God’s way.”

In closing her sermon, Ridgill finally explained the significance of her backpack. “God never meant for us to carry things around that burden us, just like a preacher shouldn’t preach with a backpack on, so I’m taking it off,” she said. “Is there something in your life that you’re dealing with? Today God says, ‘Give it to me.’”

In a visualization exercise, she invited worshipers “to grab [the thing] in your mind and pretend to put that thing in your hand.” As those gathered bowed their heads, Ridgill offered prayer.

“I pray with you that your load will be lightened and you’ll realize the awesome love God has for you,” she said. “I pray that somebody will feel better even now. God loves you and there ain’t a thing you can do about it.”

Presbyterian Youth Triennium continues through Saturday, July 23. Presbyterian News Service will continue to post stories from the event and live event information can be found on Twitter via this link: https://twitter.com/search?q=%23pyt2016