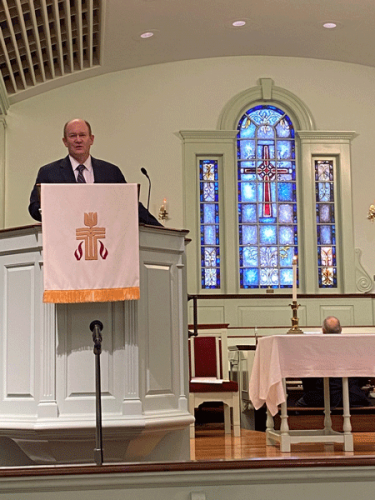 U.S. Senator Chris Coons preached Sunday at the church that nurtured him growing up, Red Clay Creek Presbyterian Church in Wilmington, Delaware, which is celebrating its 300th anniversary this year. (Photo by the Rev. Cindy Kohlmann)

LOUISVILLE — Red Clay Creek Presbyterian Church in Wilmington, Delaware, turns 300 this year, and the congregation plans a year-long celebration. On Sunday, worshipers meeting both in-person and online heard an inspiring and heartfelt sermon from one of its favorite sons, U.S. Senator Chris Coons, D-Delaware, who deftly put into historical perspective the church’s lengthy history.

“What was here in 1722? A small hardy band of Presbyterian farmers in the new wilderness gathered on the banks of Red Clay Creek to worship without a pastor or a building for the first three decades,” said Coons, a product of both the Yale Divinity School and Yale Law School. By the time a small group gathered at the Golden Fleece Tavern in Dover to ratify the U.S. Constitution and make Delaware the nation’s first state, “Red Clay was 65 years old,” Coons noted.

“I have great confidence in the spirit that has informed and sustained this congregation from the very beginning to today and into its future,” Coons said.

Coons says he draws on-the-job sustenance every Wednesday at the U.S. Capitol, when about two dozen senators on both sides of the political aisle meet with the Chaplain of the U.S. Senate, the Rev. Dr. Barry C. Black, for a prayer breakfast, although not much breakfast has been consumed during the pandemic.

“We pray, talk about our families, sing a hymn, and then one of us stands up and witnesses about the role of faith in our life,” Coons said. “I have seen week in and week out over the 11 years I’ve been there the most remarkable moments of vulnerability and humanity.”

Senators addressing their colleagues for the first time in that setting generally burst into tears, Coons said.

“They often talk about the loss of a loved one … and how their faith has challenged them, sustained them and moved them to service,” Coons said. “It brings us together even in that building today riven with division in a spirit of remarkable humanity and unity.”

“And what do you think I talk about?” Coons asked those gathered for worship. “I talk about you. I’ve talked about the powerful impact of Red Clay Creek Presbyterian Church on my family and my life.”

He’s shared the story from his childhood of how his father, who was part of the church’s prison ministry team, once welcomed into the Coons home a convicted murderer. He’s also described “dozens of different ministries over decades and decades, the ways you have done service and ministry, great and small, from coffee hour to bell choir,” from “challenging sermons delivered from this pulpit … to many others. My infant baptism happened elsewhere, but my preparation and confirmation happened literally here. When I’ve gone out into the world … I have thought of you in gratitude and in prayer. From working with Desmond Tutu in South Africa to visiting refugee camps in Sudan, the spirit of this place has shaped and informed not just me but dozens and dozens and dozens.”

After consulting with friends who’d also grown up in the congregation, the group identified seven of their cohort serving in ordained ministry. “Others serve in more fallen ways,” Coons said with a smile, “yet do our best to carry forward what is so powerful about the spirit of this place.”

John, “the one who lays the path for Christ by calling the people of Jerusalem out to repentance,” baptizes Jesus in a “pretty remote, small muddy river,” Coons preached.

“This is the moment when Jesus, raised in his home synagogue, nurtured in Nazareth, certainly familiar with the Temple, and yet he launches his ministry in the margins, amongst the rabble with this wild-haired man,” Coons said. “Why? What does that mean for us?”

Coons said he took the opportunity before Sunday’s service to return to his second-grade Sunday school classroom. “It looks exactly the same,” he said, chuckling. “As I talked with my cohort, the folks I grew up with, for each of us, there was a moment outside the ordinary when we actually encountered the risen Christ in others and thus in ourselves. On a mission trip overseas. Serving lunch with the homeless. Welcoming a refugee family,” even inviting that convicted murderer long ago to meet the Coons family. “What has happened in this place over the decades of the lives of those who were raised up with me was risky encounters of Christ through moments of mission, bravery and risk.” 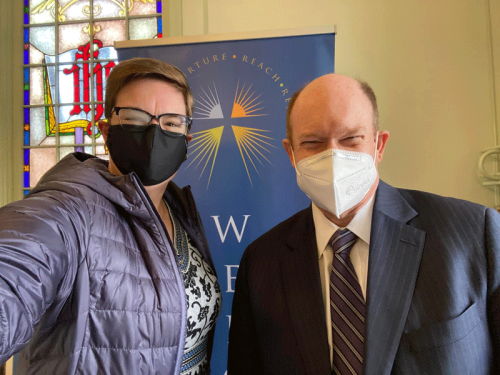 What the founders of Red Clay Creek Presbyterian Church sought — and it’s what members still seek — is “the baptism and the presence of the risen Christ … that inbreaking, that moment of surprise and of hope that sustained them,” Coons said. “I don’t just pray — I know that if we will but open our hearts this year, we will be anointed for the 21st century in this gathering, in this congregation, in this place.”

Don’t worry too much about the building, the annual mission campaign and the budget, Coons said. In addition, don’t be too concerned about how many people are in the pews “and whether this congregation will again soon look like the congregation that raised me 50 years ago,” Coons said. “Worry only if we have the courage to open the Book and read the Word, to be inspired to hear the voice of that man in the wilderness calling us to see this amazing thing — that God loves us, that God sent his only son to die for us and atone for our sins, and that God through the Holy Spirit is waiting to empower us to do remarkable things. Amen.”

“As a relative newcomer to the presbytery, it was wonderful to hear about Senator Coons’ history with Red Clay Creek, his stories of growing up and being confirmed in the congregation, and his continuing connections with his classmates and the adults who mentored him as a youth,” Kohlmann said. “New Castle Presbytery, founded in 1717, has the honor and joy of having several congregations who have marked more than 300 years of mission and ministry.”